Tea is anti-cancer or carcinogenic? Due to the widespread dissemination of tea drinking culture, modern scientists have also begun to continuously study the mystery of tea to human health. More and more evidences show that drinking tea is good for health. Studies have always confirmed that tea has the effects of improving cardiovascular health and anti-cancer. However, the mechanisms behind these therapeutic properties have not yet been fully elucidated.

Recently, a new study by the University of California, Irvine, showed that the compounds in green tea and black tea can relax blood vessels by activating ion channel proteins in the blood vessel walls. This discovery helps explain the anti-hypertensive properties of tea and may lead to the design of new blood pressure lowering drugs. The research results were published in “Cellular Physiology and Biochemistry” (Cellular Physiology and Biochemistry). 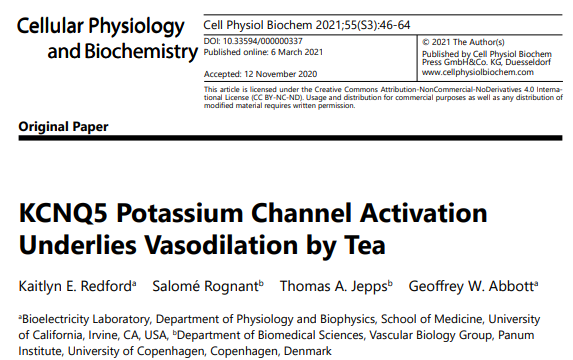 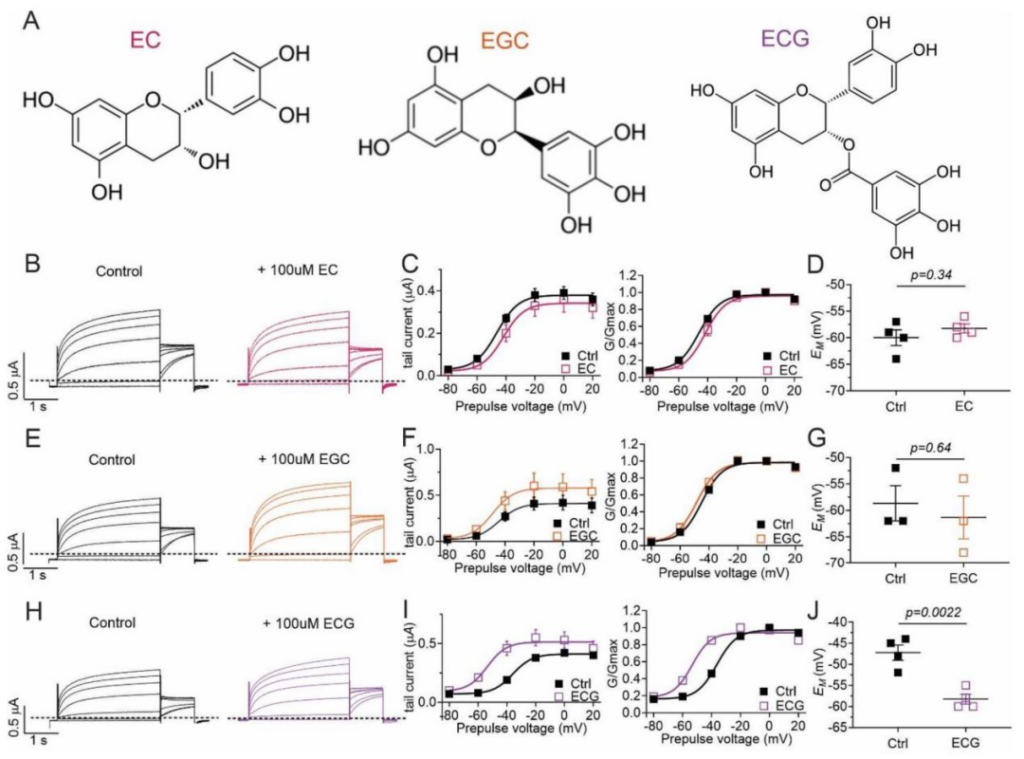 Since as many as one-third of the adult population in the world suffers from high blood pressure, and this condition is considered to be the number one risk factor for cardiovascular disease and premature death globally, new methods for the treatment of high blood pressure have improved global Great potential for public health. The findings of this study will help the medical community to use tea catechin KCNQ5 as a new target for hypertension characteristics and optimize drugs to improve efficacy or curative effect.

In addition to its role in controlling blood vessel tension, KCNQ5 is also expressed in various parts of the brain, regulating the electrical activity and signal transmission between neurons. The presence of pathogenic KCNQ5 gene mutations can impair its channel function and cause epileptic encephalopathy (a serious developmental disorder that debilitates and causes frequent seizures). Since catechins can cross the blood-brain barrier, it is found that they can activate KCNQ5, which may suggest that there is a mechanism to repair broken KCNQ5 channels in the future to improve brain excitability disorders caused by its dysfunction.

Nowadays, many people like to drink milk tea, mixing black or green tea with milk. So will it have any impact? The study also mentioned that when black tea is directly applied to cells containing KCNQ5 channels, the addition of milk prevents the beneficial effect of tea on KCNQ5 activation. However, the researchers said that they do not think that this means that people need to avoid milk when drinking tea to take advantage of the beneficial properties of tea. Since the environment in the human stomach separates catechins from the proteins and other molecules in milk, it will not affect the beneficial effects of catechins.

Black tea can activate KCNQ5, and milk can inhibit this effect.

In addition, the team also used mass spectrometry to find that heating green tea to 35 degrees Celsius would change its chemical composition, making it more effective to activate KCNQ5. The researchers emphasized that because the human body temperature is about 37 degrees Celsius, the temperature of the tea after entering the human body can activate its beneficial antihypertensive properties, regardless of whether the tea is cold or hot.

The production and consumption of tea has a history of more than 4,000 years. At present, there are more than 2 billion cups of tea consumed in the world every day, second only to water in the consumption of people in the world. The three common types of caffeine tea (green tea, oolong tea, and black tea) are all made from the leaves of the evergreen camellia, the difference being the degree of fermentation during the tea making process. 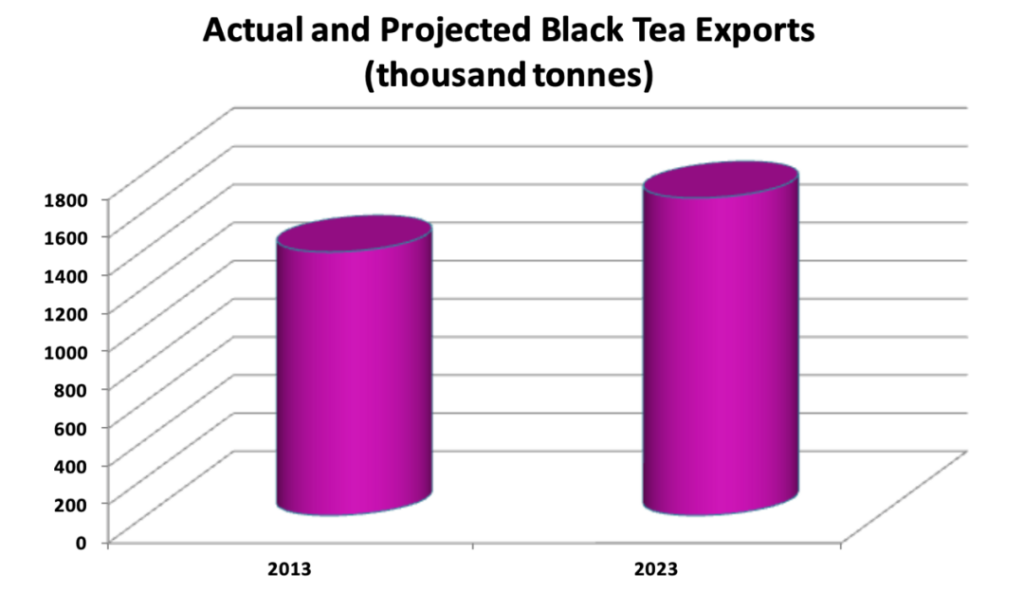 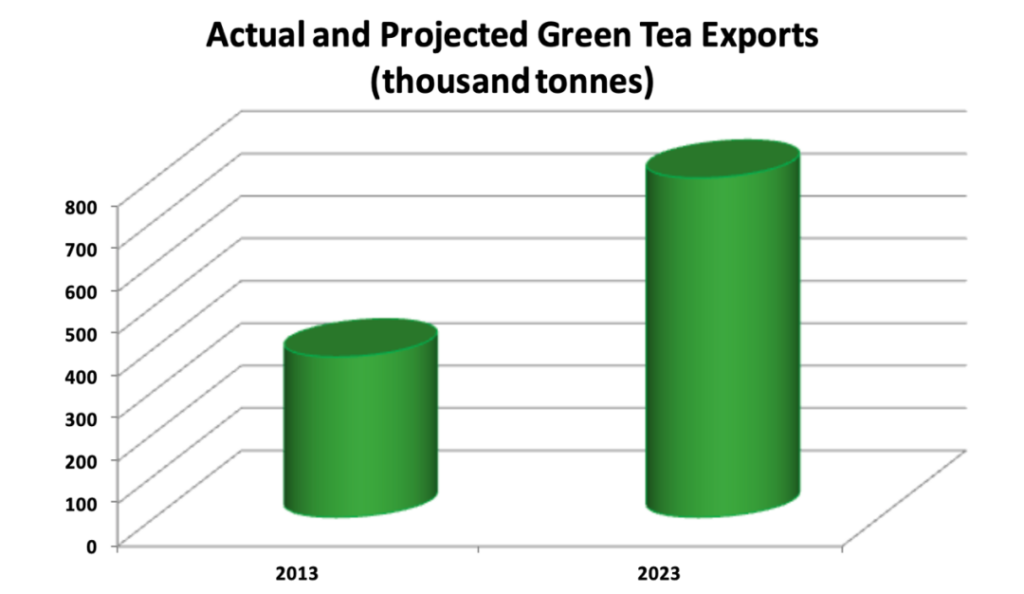 In addition, many studies have confirmed that the polyphenols contained in tea have anti-cancer effects. In February 2021, a study published in Nature Communications showed that EGCG in green tea may enhance the anti-cancer activity of p53. p53 is a natural anti-cancer gene, known as the “guardian of the genome” because of its ability to repair DNA damage or destroy cancer cells.

P53 has several well-known anti-cancer functions, including stopping cell growth for DNA repair, activating DNA repair, and triggering programmed cell death (called apoptosis) if DNA damage cannot be repaired. Mutations in p53 have been found in more than 50% of human cancers, and EGCG is the main antioxidant in green tea. Now it has been discovered that there is a previously unknown and direct interaction between the two, which points to the development of anti-cancer drugs. A new path.

Studies have found that EGCG disrupts the p53-MDM2 interaction and inhibits the ubiquitination of p53 mediated by MDM2. Normally, after p53 is produced in the body, it will be rapidly degraded when the N-terminal domain interacts with the protein of MDM2. This regular production and degradation cycle keeps the level of p53 at a low constant value. However, both EGCG and MDM2 are in the same binding site of p53, which is the disordered N-terminal domain (NTD), and EGCG competes with MDM2. When EGCG binds to p53, the protein is not degraded by MDM2, so after direct interaction with EGCG, the level of p53 will increase. 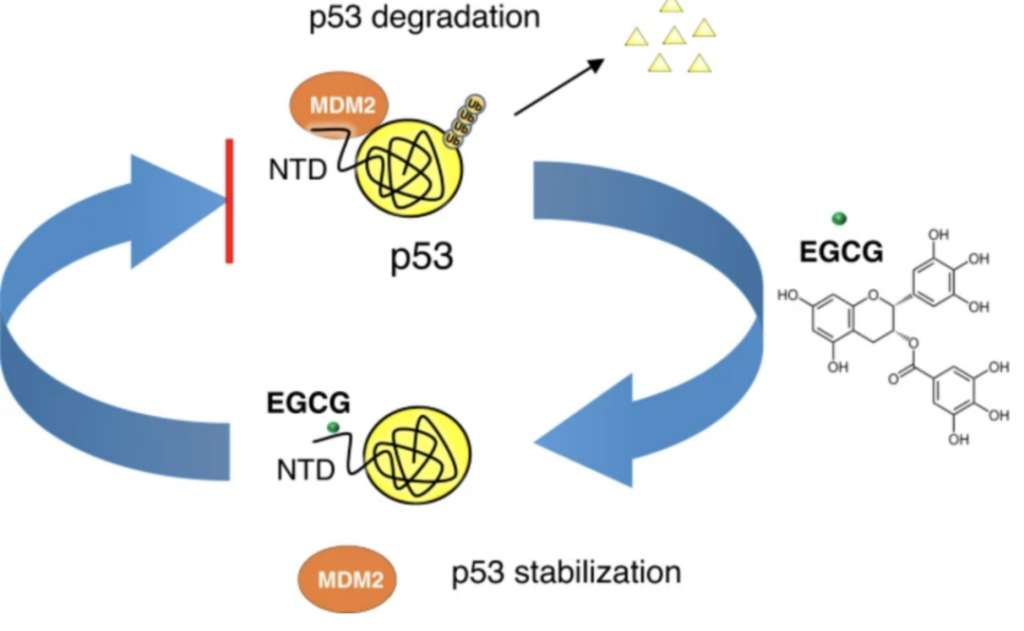 In addition, the interaction between EGCG and p53–NTD is highly dynamic, involving multiple binding interfaces. As we all know, NTD is the target of anti-cancer drug discovery. A small molecule EGCG with a MW value of 458 Da can effectively disrupt the interaction between p53 and MDM2 and has a dynamic interface. In the past, drug discovery aimed at destroying p53-MDM2 mainly focused on the NTD binding pocket on the surface of MDM2. This data indicates that the NTD of p53 may also be a good target for the discovery of small-molecule cancer drugs.

The results of this study explain how EGCG can enhance the anti-cancer activity of p53 and open the door to the development of drugs similar to EGCG compounds.

There are still some controversies as to whether tea drinking can fight cancer. In August 2019, Professor Li Liming’s team published in the European Journal of Epidemiology, “The Association between Tea Drinking and Cancer Risk: A Prospective Cohort Study of 500,000 Chinese Adults” The paper used data from more than 500,000 Chinese to analyze the relationship between the habit of drinking tea and the risk of various cancers.

Based on the long-term follow-up of more than 450,000 people, the study examined whether tea drinking is related to the incidence of all cancers and six major cancers-lung cancer, stomach cancer, colorectal cancer, liver cancer, and female breast and cervical cancer.

Researchers found that in this study, people who drank more tea tended to smoke and drink more. They thought that tea could prevent cancer, so they let go of smoking and drinking, but in the end cancer came to their door. Tea contains caffeine, which can stimulate the gastric mucosa. This content is nothing in weak tea, but if you love to drink strong tea and drink it for a long time, it may increase the incidence of gastric cancer. Chinese people like to drink hot tea, but hot water above 65℃ will scald the esophagus, and repeated scalds may induce esophageal cancer.

Therefore, it may not be known whether tea is anti-cancer, but don’t use tea as an anti-cancer medicine and let your bad habits go.