Green tea is a popular beverage in the world. Many studies have found that it has a certain inhibitory effect on various cancers, including breast cancer, lung cancer, prostate cancer and colon cancer. The chemopreventive effect of green tea on tumors is mainly attributed to polyphenolic compounds, of which epigallocatechin gallate (EGCG) is the most important.

EGCG accounts for 50-80% of green tea catechins. A cup (240 ml) of green tea contains 200-300 mg of EGCG. The anti-cancer effect of EGCG has been confirmed in epidemiology, cell culture, animal research and clinical trials. In the anti-tumor properties induced by EGCG, p53 plays an important role. p53 is often called the “guardian of genes” and is an important tumor suppressor.

It is known that p53 mutations are found in more than 50% of human cancers. However, the molecular mechanism of how EGCG interacts with p53 is unclear.

In a new study published in “Nature Communications” on February 13, a research team led by Professor Chunyu Wang from the Department of Biological Sciences at Rensselaer Polytechnic Institute in the United States discovered a previously unknown direct relationship between p53 and EGCG. It interacts and explains how EGCG enhances the anti-cancer activity of p53, thereby indicating a new target for the development of anti-cancer drugs. 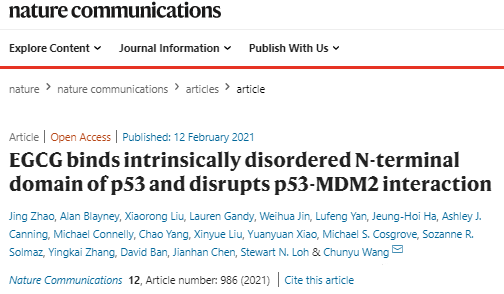 Chunyu Wang is an expert in studying the specific mechanisms of Alzheimer’s disease and cancer using nuclear magnetic resonance spectroscopy. He described p53 as the most important protein in human cancer.

p53 has several well-known anti-cancer functions, including stopping cell growth to allow DNA repair, activating DNA repair, and initiating programmed cell death called apoptosis when DNA damage cannot be repaired. One end of p53 is called the N-terminal domain (NTD). NTD is a disordered protein that interacts with many proteins and acts as the hub of cell signaling. Therefore, it may perform multiple functions.

Studies have found that the interaction between EGCG and p53 prevents protein degradation. Under normal circumstances, when p53 is produced in the body, when NTD binds to a protein called MDM2, it will mediate the ubiquitination and degradation of p53. MDM2 has been found to be mutated and amplified in a variety of tumors, and its amplification is closely related to tumor metastasis.

MDM2 is independent of ubiquitination, and it inhibits transcription by preventing general transcription factors from binding to NTD. The apoptosis effect of EGCG on human cancer cells is related to its interference with MDM2-mediated p53 ubiquitination. In a recent study, EGCG was identified as an inhibitor of p53-MDM2 interaction from a library of 2,295 phytochemicals.

In this new study, the researchers used surface plasmon resonance (SPR) and STD-NMR to determine that the NTD of p53 is the main EGCG binding site, which coincides with the MDM2 binding site. EGCG destroys the p53-MDM2 interaction by binding to NTD and inhibits the ubiquitination of p53 mediated by MDM2, which is the main degradation pathway of p53. These results provide more details on the mechanism by which EGCG induces cancer cell apoptosis and EGCG’s cancer prevention and potential curative effects.

Wang Chunyu said: “EGCG and MDM2 are both bound at the same position in the N-terminal domain of p53, so EGCG and MDM2 are in a competitive relationship. When EGCG binds to p53, the protein will not be degraded by MDM2, so the level of p53 will vary. The direct interaction with EGCG increases, which means that more p53 has anti-cancer functions. This is a very important interaction.”