New advances in radiotherapy for pancreatic cancer in 2019-2020

New advances in radiotherapy for pancreatic cancer in 2019-2020.   Precision radiotherapy technology continues to improve, multi-modal images combined with delineation of the target area, “FLASH” radiotherapy can better protect normal tissues, and the radiotherapy dose mode is developing in the direction of high dose and less fractionation. 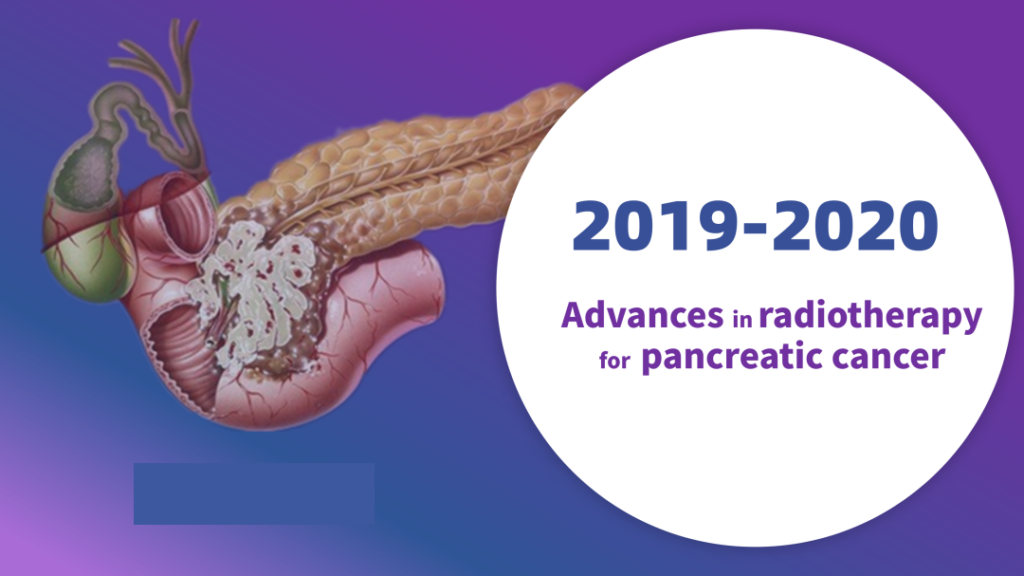 Caravatta et al. [3] conducted a multi-center pancreatic tumor delineation study to evaluate the consistency of MRI and CT in pancreatic cancer gross tumor volume (GTV) and duodenal delineation, and found that MRI was in the borderline resectable cases CT has a smaller GTV than CT.

The average volumes of CT and MRI-GTV are (21.6±9.0) cm3 and (17.2±6.0) cm3, respectively, which are basically the same between observers. PET is an imaging technology that can quantitatively evaluate the biochemical changes in the body. The image fusion positioning of PET, CT, and MRI is important for the identification of metastatic lymph nodes.

The patient suffered from multidrug-resistant CD30+ T-cell lymphoma. The skin lesions were still progressing after receiving systemic treatment, and the lesions had invaded the whole body. The skin has received more than 110 fractions of conventional dose rate radiotherapy. This time I received 15 Gy within 90 ms. After 3 weeks of irradiation, the patient only developed grade I dermatitis and edema. After 5 months, the curative effect was evaluated and tumor control was found. good. However, the determination of the specific pulse dosing method and the irradiation division mode still needs more research results.

45~50.4 Gy, a single 1.8~2.0 Gy conventional fractional radiotherapy (CFRT) is mainly used for auxiliary purposes In treatment, when it is applied to the treatment of visible lesions and radiotherapy and chemotherapy, it is recommended to use high-dose and low-fraction radiotherapy including hyperfractionation and SBRT. Xiang et al. [6] retrospectively analyzed the data of resectable pancreatic cancer receiving neoadjuvant treatment in the National Cancer Database (NCDB) from 2010 to 2015, and found that 175 cases of SBRT neoadjuvant radiotherapy combined with chemotherapy were longer than 1355 cases of neoadjuvant chemotherapy alone. OS (30 months vs 21 months, P=0.02), also prolonged survival time compared with 552 cases of CFRT (29 months vs 16 months, P=0.002).

Similar results are also confirmed by the meta-analysis results of Tchelebi et al. [7]. The 2-year OS rate of SBRT is higher than that of CFRT (26.9% vs 13.7%, P=0.004). Among them, SBRT mostly adopts 30 Gy/5F model, biological etc. The effective dose (BED) is 1048 Gy. Most of the SBRT patients enrolled in this meta-analysis are receiving neoadjuvant therapy for pancreatic cancer. Therefore, the above report only shows that this SBRT dose mode is dominant in neoadjuvant radiotherapy.

The hyperfractionated radiotherapy mode has recently emerged in the field of pancreatic cancer radiotherapy, and is considered to be superior to the SBRT mode. Dosimetry studies [8] show that the internal dose of the target area is increased on the basis of the 15-time mode, which is easier to achieve BED10=100 Gy than the 5-time mode . Compared with 3 to 5 times of SBRT, 10 to 15 times of hyperfractionated radiotherapy may be the main method of pancreatic cancer radiotherapy in the future. There is still a lack of clinical trial studies comparing the two modes.

3 clinical progress in each phase

In patients with resectable pancreatic cancer, the median OS of R0 patients after surgery is 34.8-55.3 months. The results of a phase II prospective clinical trial—ESPAC-5F were released at the ASCO meeting in 2020. The 1-year OS rate of the secondary endpoints of various neoadjuvant regimens for the treatment of borderline resectable patients is better than that of patients with direct surgery (77% vs 42%) ), of which 16 patients received CFRT combined with capecitabine and the 1-year OS rate was 64%. Versteijne et al. [14] reported the results of the phase III clinical trial PREOPANC.

Currently, reports of locally advanced pancreatic cancer radiotherapy mostly use the SBRT radiotherapy mode, but the overall radiation dose is not high, and it has not reached the real high-dose, low-fractionated radiotherapy mode. Shen et al [17] reviewed the prognostic results of 56 cases of locally advanced pancreatic cancer receiving SBRT in a single center. The median dose of radiotherapy was 40 Gy/5F, combined with gemcitabine and capecitabine chemotherapy, the median OS and median progression-free survival (PFS) ) It was 19 months and 12 months from the time of diagnosis, and the 1-year and 2-year OS rates were 82.1% and 35.7%, respectively. Two patients (3.6%) had acute grade 3 duodenal obstruction symptoms, 3 Cases (5.4%) developed advanced grade 3 gastrointestinal toxicity, and 2 cases (3.6%) developed grade 4 advanced radiation enteritis and intestinal perforation. Arceli et al. [18] reviewed the use of SBRT technology to treat locally advanced pancreatic cancer with a median dose of BED1048Gy alone or in combination with chemotherapy. The results showed that the 2-year median OS rate was 33.8%, the local control rate was 55.8%, and the radiation dose was Independent prognostic factors of patient OS and local control rate.

The local curative effect of pancreatic cancer after receiving radiotherapy is obvious, but because the tumor progresses rapidly, most patients will have distant metastasis. If the risk of metastasis is not reduced, the local curative effect of radiotherapy will be transformed into a limited result of long-term survival. Some studies [22] found From 2010 to 2014, compared with 1988 to 1996, the total OS of locally advanced pancreatic cancer patients receiving radiotherapy in the United States was prolonged by 3 months. A study reviewing NCDB data [23] showed that radiotherapy and multi-drug combined with neoadjuvant therapy are factors influencing the degree of postoperative pathological remission of patients. For this reason, it is recommended to combine systemic treatment with radiotherapy for pancreatic cancer.

In order to improve the treatment effect of the whole body, the researches recently reported mostly focus on the powerful chemotherapy regimen combined with multi-drug combination before radiotherapy. Thanikachalam et al. [11] carried out a prospective phase II resectable or borderline resectable neoadjuvant chemotherapy for pancreatic cancer. After 24 patients received 2 cycles of FOLFOX chemotherapy, 13 patients received CFRT concurrent gemcitabine chemotherapy, 11 patients The patients (84.6%) had R0 resection, the median OS was 34.8 months, and the 2-year OS rate was 75%. Garnier et al. [24] prospectively studied the prognostic results of 187 cases of locally advanced pancreatic cancer with concurrent radiotherapy or continued chemotherapy after induction chemotherapy. The induction chemotherapy regimen was also FOLFIRINOX and concurrent capecitabine during radiotherapy 54 Gy/30F. The statistical results found that despite There was no difference in OS between concurrent chemoradiation and chemotherapy alone, but they had a longer PFS (13.3 months vs 9.6 months, P<0.01).

Targeted drugs for pancreatic cancer are effective in a small number of patients through genetic testing, and most patients do not have effective targeted drugs. The microsatellites of pancreatic cancer are extremely unstable, the tumor mutation load is generally low, and immune cells are lacking in the microenvironment. So far, no effective results have been reported for its immunotherapy. However, some scholars speculate that radiotherapy can release more antigens from the tumor and change the pancreas. The cancer immune microenvironment is more conducive to the effect of immune drugs, and related research is ongoing.

In order to explore the possibility of MRI imagingomics in predicting the efficacy of SBRT in pancreatic cancer, SimPson et al. [26] collected low-field strength (0.35T) MRI-guided MRI images before each treatment of pancreatic cancer patients during SBRT, and extracted the radiological characteristics. Calculating the relationship between these characteristics and the curative effect after radiotherapy, it was initially found that these radiological characteristics of MRI can be used as predictive information of patients’ response to treatment. MRI images have more radiomic features than CT, and how to effectively use these features is worthy of further research in the future.

There are many reports on the prediction or prediction of the efficacy of PET for pancreatic cancer after radiotherapy. Su et al. [27] found that when PET 40% metabolic tumor volume (MTV) is less than 5.6 cm3, patients with pancreatic cancer after SBRT have longer OS and PFS. MTV is an independent prognostic factor of OS and PFS. Incerti et al. [28] believe that the total glycolysis of the lesion (ΔTLG) 50 is related to OS, PFS, and survival without local recurrence.

recision radiotherapy technology continues to improve, multimodal images combined with delineation of the target area, “FLASH” radiotherapy can better protect normal tissues, and the radiotherapy dose mode is developing in the direction of high dose and less fractionation.