Peripheral T cell tolerance: a checkpoint in the life journey of T cells.  Quiescence is a peripheral tolerance mechanism that can limit the response of naive T cells to strong signals.

Studies in the past 50 years have shown that T lymphocytes have significant diversity in terms of developmental origin, differentiation trajectory, migration and residence mode, effect, cytotoxicity and inhibitory activity. Multiple negative regulation has been found in the development and function of T cells, collectively referred to as “T cell tolerance”.

“Central tolerance” describes the selection mechanism in the differentiation process of thymocytes. These mechanisms shape the cell pool that limits the survival of self-reactive cells. Peripheral tolerance is maintained by a variety of mechanisms that inhibit peripheral T cells from self-antigens. Reaction. Studies have shown that the efficiency of removing autoreactive T cells from the thymus is only about 60-70%, making the peripheral primitive T cell pool contain a large number of low-affinity, autoreactive T cells. These T cells constitute a potential risk of an autoimmune response.

In order to prevent host tissues from being harmed, the fate of these cells is determined by a series of checkpoints. These checkpoints regulate the quality and degree of T cell-mediated immunity, called tolerance checkpoints. 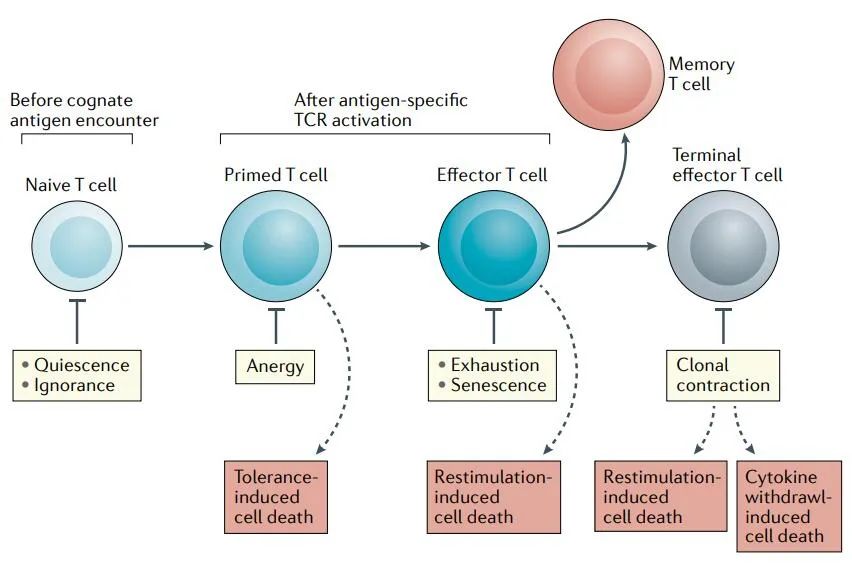 In the naive T cell stage, the two internal checkpoints that actively maintain tolerance are quiescence and neglect. In the absence of costimulatory T cell activation, incompetence is the main hallmark of T cells. When T cells are successfully activated to exert their effects, exhaustion and aging can limit excessive inflammation and prevent immunopathology. At each stage of the T cell journey, cell death is a checkpoint that limits clonal expansion and terminates the unrestricted reaction.

Quiescence is a peripheral tolerance mechanism that can limit the response of naive T cells to strong signals. Quiescence is also an active process. It maintains T cells in the G0 phase of the cell cycle, maintains a small cell size, ensures low cell metabolism, and prevents the development of effector functions. Quiescence plays a key role in clone selection, ensuring that most cells that bind to a specific antigen are inhibited, and limiting the expansion of clones to high-affinity clones.

Many molecular effectors involved in T cell quiescence have been identified, and they control a series of different biological pathways. TGFβ-1 and TOB1 are two effectors of the transforming growth factor-β superfamily. They down-regulate the production of IL-2 and the activation of T cells through the downstream signal transmission of SMAD.

In addition, the expression of the inhibitory checkpoint receptor VISTA seems to be essential for the maintenance of quiescent state of primitive T cells. Studies have shown that the level of important quiescent effector molecules expressed by VISTA-T cells, such as KLF2, BTG1 and BTG2, is reduced.

Neglect is another tolerance checkpoint at the naive T cell stage that has been observed in multiple systems, but its mechanism is still unclear. Simply put, despite the presence of specific autoantigens, autoreactive T cells may fail to activate and cause autoimmune diseases. These T cells are still in a naive, reactive state.

A noteworthy difference between quiescence and neglect is that quiescence is a universal tolerance marker for all naive T cells, regardless of their antigen specificity, while “ignorance” refers to avoiding the activation of specific autoreactive T cells, host tissues And the location of the autoantigen is the determining factor.

Anergy is the closest non-absent tolerance mechanism after TCR is involved. It is functionally defined as the low responsiveness of T cells to re-stimulation under strong stimulation conditions. Functionally, it is an early checkpoint in the initiation of T cells, preventing potential T cell pathogenicity before the start of the T cell effector phase.

At the molecular level, impotence is caused by costimulatory defect (tolerance) TCR activation. In T cells that are normally co-stimulated (such as CD28) that receive TCR signals, the inducing transcription factor NFAT1 and AP-1 together induce T cell differentiation and effector functions. In contrast, tolerant TCR activation leads to defects in RAS–MAPK signaling, which in turn impairs AP-1 translocation to the nucleus. In this case, only the imbalance of NFAT1 activation led to the inducible expression of several genes involved in the state of incompetence, such as diacylglycerol kinase-α (DGKα) and the regulatory ubiquitin ligase CBLB.

The hallmark functional changes that define impotence include a significant decrease in IL-2, INF-γ, and TNF levels under TCR stimulation. This acquired refractory state is related to growth arrest and defects in cell cycle progression. Although incompetence is persistent, it is reversible. In vivo studies have shown that in the absence of antigen, incompetent T cells slowly recover their functional response, which indicates that maintenance of incompetence requires prolonged antigen exposure.

T cell exhaustion is the main non-absent tolerance mechanism in the effector stage of T cells. Compared with Teff cells whose functions are fully activated, Tex cells have reduced, but not missing, response to antigens at multiple levels. The characteristics of Tex cells include (1) reduced cytokine production, (2) sustained high levels of inhibitory receptor expression, (3) changes in epigenetic, metabolic and transcriptional status, and importantly, (4) inability to transition to The quiescent cell state observed in memory T cells.

Preliminary studies on the phenotype of Tex cells found that these cells express a variety of inhibitory receptors, including PD1, LAG3, TIGIT, CD38, CD39, and TIM3. In fact, these receptors are not unique features of Tex cells. It is difficult to distinguish Tex from anergic T cells based on surface markers because these two T cell dysfunction states overlap in the expression of several inhibitory receptors.

The key difference between anergy and exhaustion is that anergy T cells appear early after T cell activation and activation, while Tex cells are produced from activated Teff cells during the effector stage. In addition, the nature of the signals that induce these cell stages is different. Anergy is the product of costimulation lack of T cell activation, while failure is caused by chronic TCR stimulation in the presence of appropriate costimulatory signals.

Senescence is defined as the stage of growth and proliferation that is induced when “the cell reaches the end of its replication potential or is exposed to various stressors.” Studies on primary human T cells have shown that senescent T cells are low proliferation and highly differentiated T cells, displaying surface markers CD45RA, KLRG1 and CD57, but not expressing costimulatory receptors CD27 and CD28.

Unlike Tex cells, senescent T cells are not impaired in effector functions, but acquire a secreted phenotype associated with senescence, which is characterized by the production of high levels of pro-inflammatory and inhibitory cytokines.

From an evolutionary perspective, senescence may prevent the occurrence of T cell lymphoma by preventing the excessive proliferation of DNA-damaged T cells. Another benefit may be the local control of excessive inflammation during chronic autoimmunity or infection.

As human life expectancy increases, aging tolerance checkpoints are likely to become more and more important because older people are more susceptible to infections that they have previously been immunized. With the increase of age, the immunity is significantly reduced, and a major factor leading to the decline in immunity is the impaired T cell function. Therefore, more in vivo mechanism studies are needed in a variety of environments to determine and clarify the relevance of this tolerance checkpoint.

Studies on the molecular mechanism of death induced by the tolerogen of primitive T cells indicate that cell death is mediated by endogenous pro-apoptotic family member BIM, which is different from exogenous apoptosis mediated by death receptors such as FAS. way. The high-resolution transcription profile of mouse T cells under tolerable and immune conditions showed unique molecular characteristics before apoptosis: This includes Rankl (Tnfsf11), Bim (Bcl2l11) and Nr4a family members Nr4a1, Nr4a2, and Nr4a3. Up-regulation, and down-regulation of the cytokine receptor IL-7Rα, all these changes may cause T cell death.

The second peripheral death checkpoint occurs when activated Teff cells are re-stimulated, leading to activation-induced cell death (AICD). This cell death mechanism is induced by the exogenous apoptosis pathway of death receptors (most commonly described as FAS, but also including TNFR1, TRAILR1, and TRAILR2). This peripheral deletion mechanism, as a self-limiting feedback process that controls the expansion of T cells, is essential for the clonal contraction process, in which antigen-specific Teff cells are eventually eliminated during the termination of the immune response.

In addition to apoptosis, T cell tolerance in peripheral blood may be related to a variety of T cell death mechanisms. An example is necroptosis (also called “programmed necrosis”, which is caspase-independent and kinase RIPK3-dependent); iron death (a type of iron-dependent programmed cell death) is through the accumulation of ROS As a result, the accumulation of ROS leads to membrane lipid peroxidation and subsequent cell death.

Although there is a complex multiple network of death pathways in T cell biology, this tolerance checkpoint mechanism is still the most effective and reliable means to inhibit T cell expansion at almost every stage of T cell activity. It can control the size and time of the immune response, thereby preventing the occurrence of T cell-mediated immune pathology.

T cell tolerance is regulated by a variety of mechanisms, which coordinately realize constitutive and negative feedback regulation mechanisms, and set up a strong barrier to pathological inflammation. However, there are some unresolved questions about the relative contribution of these mechanisms in protection and immune disorders.

For example, it is unclear how the constitutive regulators of primitive T cell quiescence cooperate to maintain this state, and the molecular activities of most related factors are still elusive. Another unclear aspect is the role of incompetence, death and exhaustion in inducing tumor T cell tolerance. In addition, we still do not know the potential contribution of cell death mechanisms such as necroptosis and iron death to T cell fate and regulation.

At present, we have reached such a stage: the complex phenotype of immune cells makes the resolution of cell states reach an unprecedented level, including multiple T cell tolerance states in the same model system, with fine time resolution. This makes it possible for us to answer the question: What tolerance mechanism dominates in each environment? What kind of regulator is playing a role?