Acohol, since it was first brewed, has been integrated into the details of people’s lives. Whether it is joys and sorrows or separation, wine is never absent. However, it is worth noting that drinking alcohol is harmful to health, and excessive alcohol abuse can induce cardiovascular and cerebrovascular diseases, metabolic diseases and neurological diseases, and even closely related to the occurrence and development of cancer.

Not only that, drinking can also be accompanied by many side effects, such as visual disturbances, uncoordinated limb movements, and retarded motor reflexes. Therefore, drunk driving is an extremely dangerous behavior. On May 1, 2011, the “Amendment to the Criminal Law of the People’s Republic of China (8)” officially incorporated drunk driving into the criminal law and increased the penalties for drunk driving.

It is self-evident that alcohol can cause brain function and behavioral disorders, but how alcohol does this has not been studied clearly.

On March 22, 2021, Professor Zhang Li’s team from the National Institutes of Health (NIH) Institute of Alcohol Abuse and Alcoholism (NIAAA) published a titled “Brain ethanol metabolism by astrocytic ALDH2 drives the behavioural effects” in the journal Nature Metabolism. of ethanol intoxication” research paper, which was also selected as the cover paper of the current issue.

This study shows that the balance and movement coordination disorders caused by low-dose alcohol are not mediated by ethanol itself, but by one of its metabolites-acetic acid (that is, acetic acid, the main component of vinegar)
Mediated.

Further studies have shown that the acetic acid that affects the nervous system is produced by astrocytes in the brain, rather than liver cells as previously thought.

Alcoholic beverages are one of the most important beverages, with nearly 2 billion consumers worldwide. But it has to be said that not everyone is tolerant to alcohol. Alcohol use disorders are usually genetically related, the most significant of which is the acetaldehyde dehydrogenase 2 (ALDH2) gene defect.

ALDH2 is a key enzyme that converts acetaldehyde into acetic acid. Therefore, ALDH2 deficiency can lead to increased blood acetaldehyde levels after drinking. Even low doses of alcohol will cause blushing reactions, and this missense mutation of ALDH2 occurs in nearly half of the cases. Of the Asian population.

Many related studies believe that the harm of alcohol and its effect on behavior are caused by its intermediate metabolite—acetaldehyde. In contrast, acetic acid has always been considered a harmless alcohol metabolite, and brain acetate has been It is believed to be mainly derived from alcohol metabolism in the liver.

Today, the research led by Professor Zhang Li has broken this perception.

In this study, the research team used quantitative PCR technology and RNAscope technology to confirm that astrocytes in the cerebellum can express ALDH2 and mediate the ethanol-induced increase in cerebellar acetate levels, while the cerebellum is responsible for maintaining balance and coordinating body movements. Important brain areas.

ALDH2 is specifically expressed in astrocytes of the cerebellum

Not only that, the researchers also constructed ALDH2 knockout mouse models of liver (Aldh2Hep−/−) or astrocytes (Aldh2Gfap−/−). The results showed that in Aldh2Gfap−/− mice, acetic acid and GABA (an important inhibitory neurotransmitter) did not increase, indicating that both are derived from the ALDH2 enzyme activity in astrocytes. 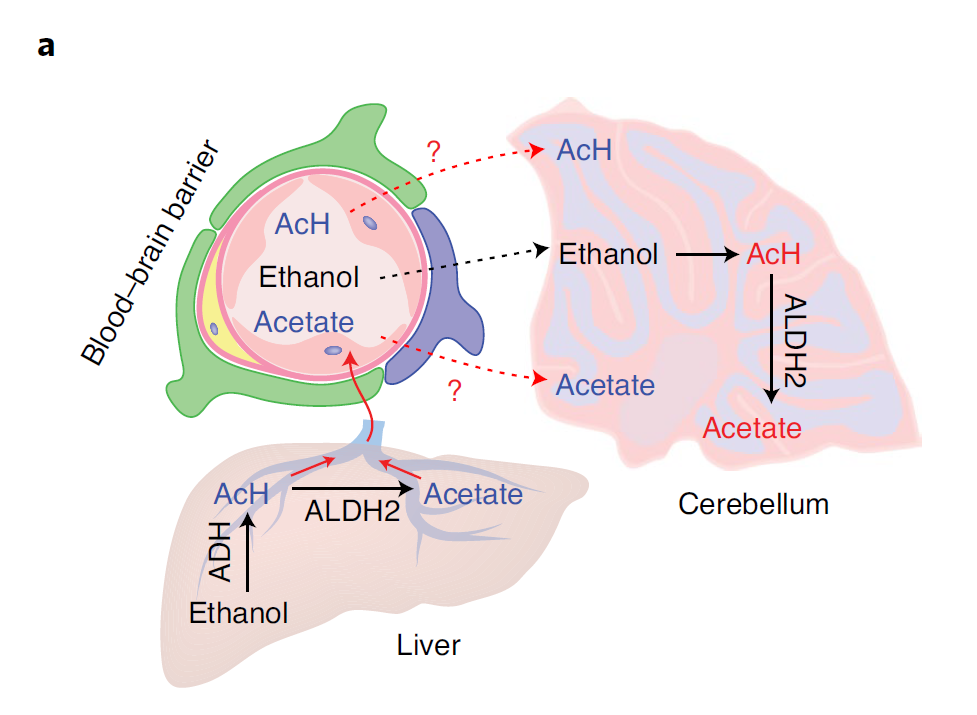 The researchers found that acetic acid alone is sufficient to increase GABA levels in mouse brain tissues and mediate alcohol-induced dyskinesia through the GABAergic mechanism, thus proving the existence of ALDH2 and GABA synthesis in astrocytes and their signaling pathways. contact.

More convincingly, in the ALDH2 knockout mice of astrocytes, although these mice still showed ethanol-induced hypothermia, they unexpectedly showed resistance to alcohol-induced balance and motor coordination disorders. Resistance, which means that ALDH2 in astrocytes is necessary for certain behavioral effects of alcohol. 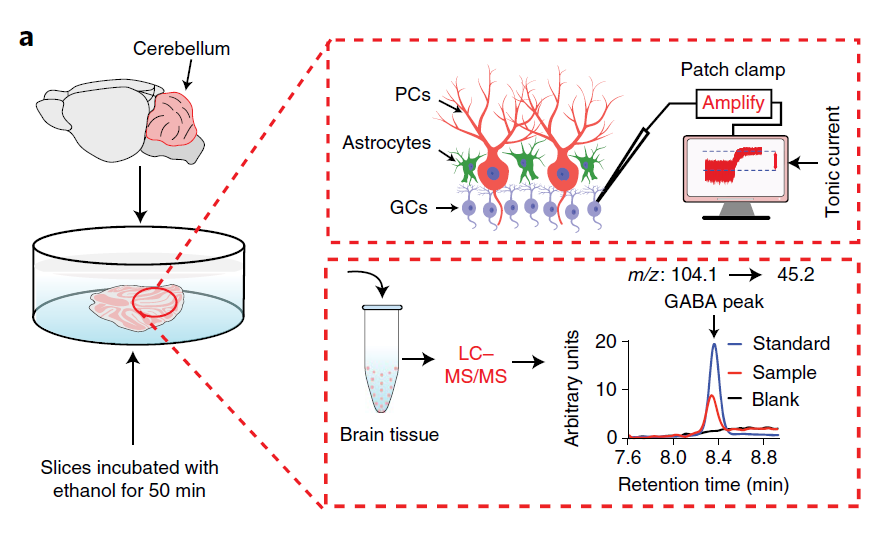 In fact, proteases related to alcohol metabolism, such as alcohol dehydrogenase (ADH) and acetaldehyde dehydrogenase (ALDH), are expressed in neurons and non-neuronal cells throughout the brain. Therefore, region-specific ethanol metabolism may be the basis for different behavioral changes caused by ethanol.

More broadly, this research increases the understanding that astrocytes control neural activity and behavior by synthesizing and releasing GABA into the extracellular environment. But for now, it remains to be elucidated how ALDH2 and acetic acid affect the synthesis of GABA and its signaling pathways. 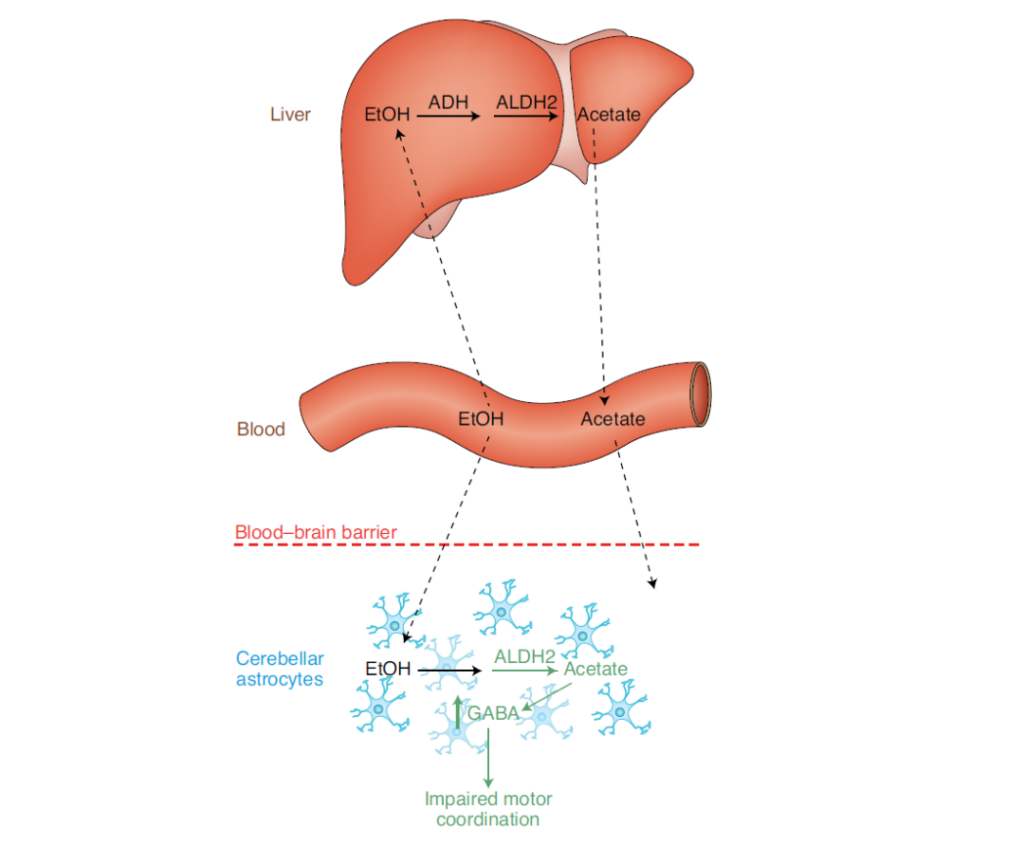 Moreover, this research also reminds us that even those metabolites that we consider to be harmless may be the culprits of the body’s obstacles!

Science should not be constrained by “conventions.” Dare to doubt, make bold assumptions, and carefully verify that are the correct scientific concepts!