On April 13, the Japanese government held a cabinet meeting to formally decide that the nuclear sewage from the Fukushima Daiichi Nuclear Power Plant will be discharged into the sea after being filtered and diluted.

There is a paper published in 2012 by Eric Behrens, a scholar at the Helmholtz Center for Marine Research in Kiel, Germany.

Based on the existing ocean model, this paper analyzed the flow of nuclear wastewater discharged from Fukushima, Japan, and finally concluded that Japan’s own pollution will no longer be serious after two years of sewage discharge, and the most polluted places will be transferred to the west coast of the United States. nearby.

The paper models the ocean currents in the North Pacific with three precisions of 0.5 degree, 0.25 degree, and 0.1 degree.

Based on the modeling, it is assumed that Fukushima, Japan, discharges the waste water containing the radioactive element cesium 137 into the Pacific Ocean for 2 consecutive discharges. -3 weeks, on this basis, daily estimates of the cesium-137 content in various regions of the North Pacific.

This screenshot attached at the end of the paper: 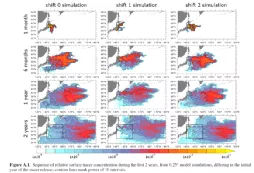 The colored part in the picture represents the detection of radioactive materials, and the density increases from blue to red. The darkest part of the red is the legendary nuclear pollution center.

It is not difficult to see that at first the red was concentrated near Japan, and as time went on all the way east, the fastest one in about six months had reached the boundary between the eastern and western hemispheres.

In a year or so, only a few patches of red remained in the waters near mainland Japan, and most of the red reached the Western Hemisphere.

Two years later, the waters near Japan’s mainland even turned white, meaning that radioactive materials were basically undetectable, but the red pollution center area continued to move eastward, singing all the way across Hawaii and rushing to the west coast of the United States.

In the preface, the paper depicts a terrible scene:

At that time (2-3 years later), the tracer cloud map (tracer is only a kind of marker added for observing, studying and measuring the behavior or properties of a substance in a specified process, according to the tracer’s The pattern drawn by the distribution is called the tracer cloud map.-Translator’s Note) It will go into the ocean 400 meters deep, stay in the sea between 25 degrees north latitude and 45 degrees north latitude, and continue to spread in the area.

In the next few years, the rate of diffusion and dilution of tracers in this area will decrease, while the main tracers will continue to spread eastward through the Pacific Ocean and reach North American coastal waters within 5-6 years.

In other words, according to the calculations of this German scholar, the United States will be the longest-term victim of Fukushima’s discharge of nuclear sewage. 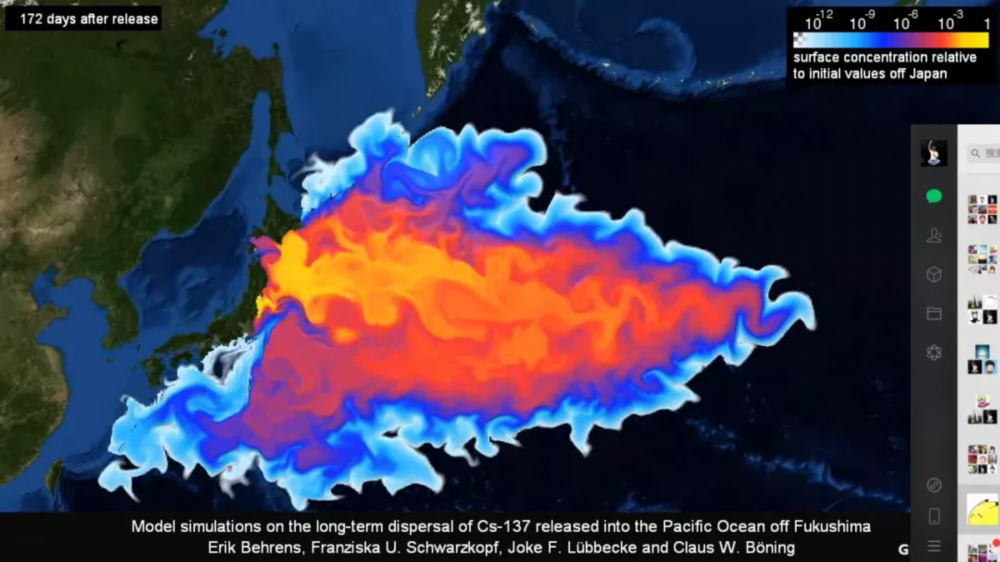 Please note that this paper only simulates an ideal situation, the real situation is much more serious than this.

How these radioactive elements drift in ocean currents, and how they will affect the human body and the ocean, has not yet been determined.

Second, the paper assumes that Japan only discharges nuclear sewage for a few weeks. But in reality, Japan plans to have a row of ten years.

Only a few weeks of emissions can affect the West Coast of the United States; after ten years, no corner of the world will be spared.

Third, in this paper, the pollution peak is mainly moving eastward, and China and South Korea can detect very few radioactive materials.