The accident at the Fukushima Daiichi nuclear power plant that occurred on March 11, 2011 was the largest nuclear accident since the Chernobyl incident in the Soviet Union before 1986.

It is classified as level 7 (extraordinary nuclear accident) in the international nuclear event level.

The core was completely melted down, and the subsequent damage was even more serious than the Chernobyl nuclear accident.

The Japanese government plans to start discharging sewage from the Fukushima Daiichi Nuclear Power Plant in two years until the nuclear power plant is dismantled from 2041 to 2051.

After a lapse of ten years, the harm of nuclear radiation began to appear, and mutant animals appeared one after another! 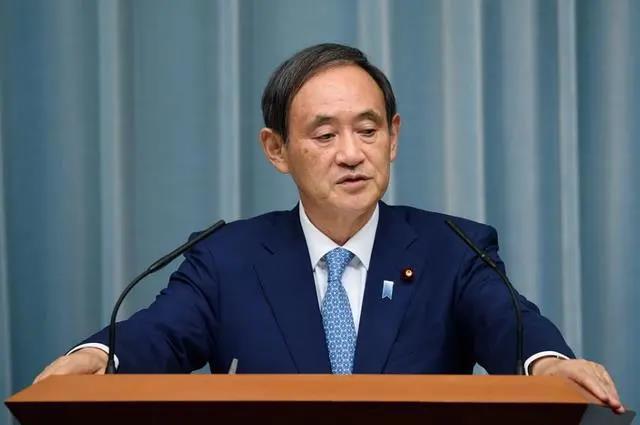 In May 2011, Japanese biologist Joji Otaki (mainly researching insects) and his colleagues collected data in Fukushima City and Motomiya City (in the northwest of the nuclear reactor, 60 kilometers to the west to be exact).

Male butterflies that have been contaminated by radiation are used as samples. In follow-up studies, they found that one in ten insects have sunken eyes, small wings or asymmetric antennae, and even found that adult butterflies overwinter like larvae! 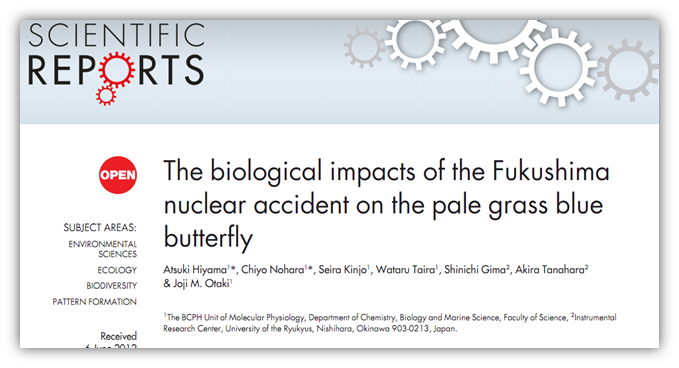 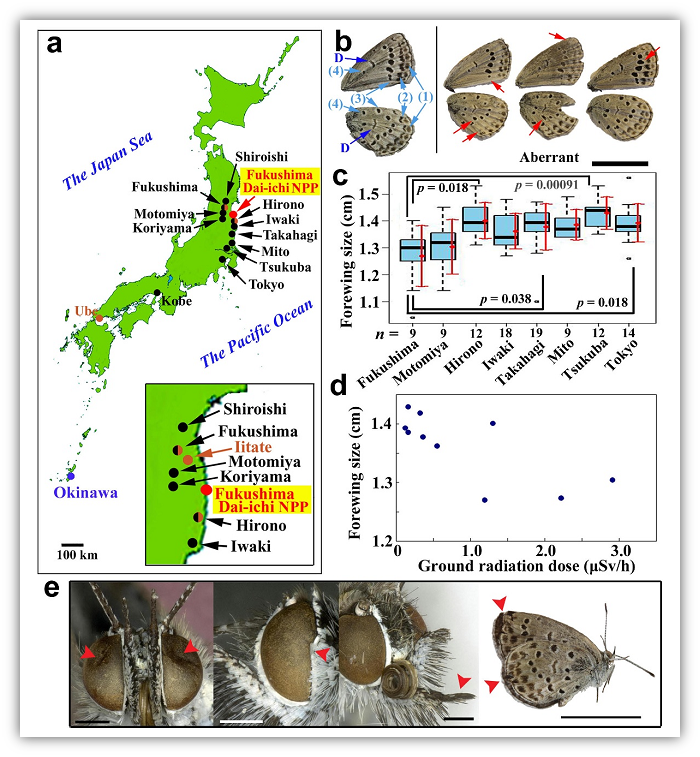 After returning to Okinawa, they cultivated the next generation of butterflies contaminated by radiation, which is also the laboratory generation.

During the growth of this generation, they have observed developmental delays such as pupae and hatching, and they have a very high rate of deformity.

The greater the radiation intensity of the butterfly’s father sample, the higher the deformity rate of its offspring.

The deformity shown in the second generation of the laboratory is not only similar to the first generation, but also new deformities, such as the growth of one more tentacles. 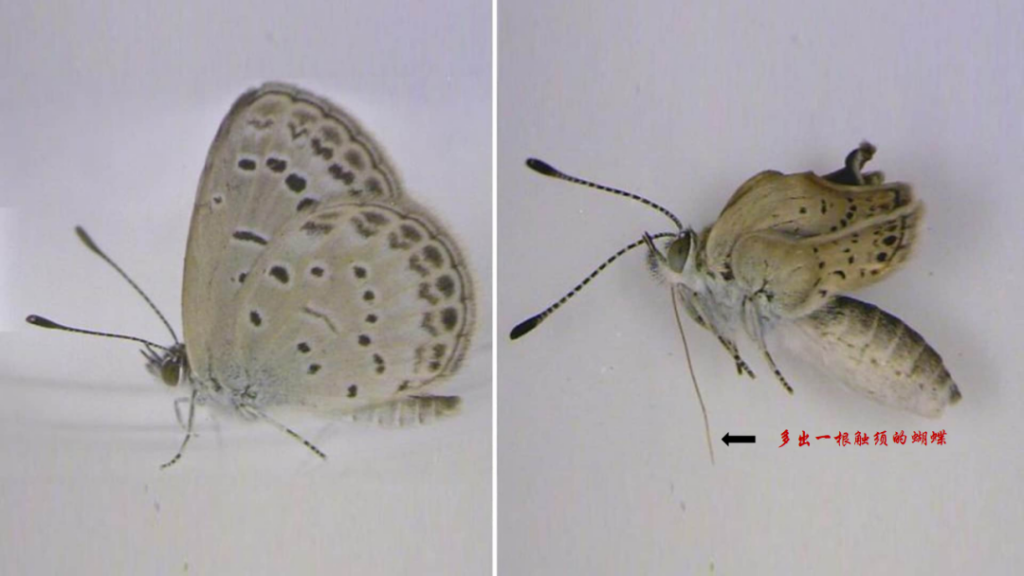 At the same time, they also conducted research on the harm caused by rays. They artificially irradiated healthy butterflies on Okinawa and fed contaminated wood sorrel to expose their internal organs to radiation.

Using this method has also been confirmed to bring about the consequences of reduced survival rate, smaller wings and body deformities.

When Ogaki Jiji returned to Fukushima four months later, they found that the mutation was developing further and that the larvae could get sick just by eating contaminated plants!

Radiation not only mutates insects, but also related American researchers have discovered that unusual white spots are also found in the feathers of local large mammals, cattle and swallows!

In order to assess the biological impact of the consequences of the Fukushima Daiichi nuclear power plant accident, some researchers compared the morphology and viability of gallic aphids in polluted areas and uncontaminated areas in Fukushima.

Among the 164 larvae from Tetraphyllum collected from 32 kilometers from the Fukushima Daiichi Nuclear Power Plant in the spring of 2012, 13.2% of the aphids showed morphological abnormalities, including four obviously deformed individuals (2.4%).

On the contrary, in the seven normal areas, the first instar larvae with abnormal morphology accounted for 0.0-5.1% (average 3.8%).

The proportion of abnormalities and mortality of gallic aphids in Fukushima area was significantly higher than that of the control group. 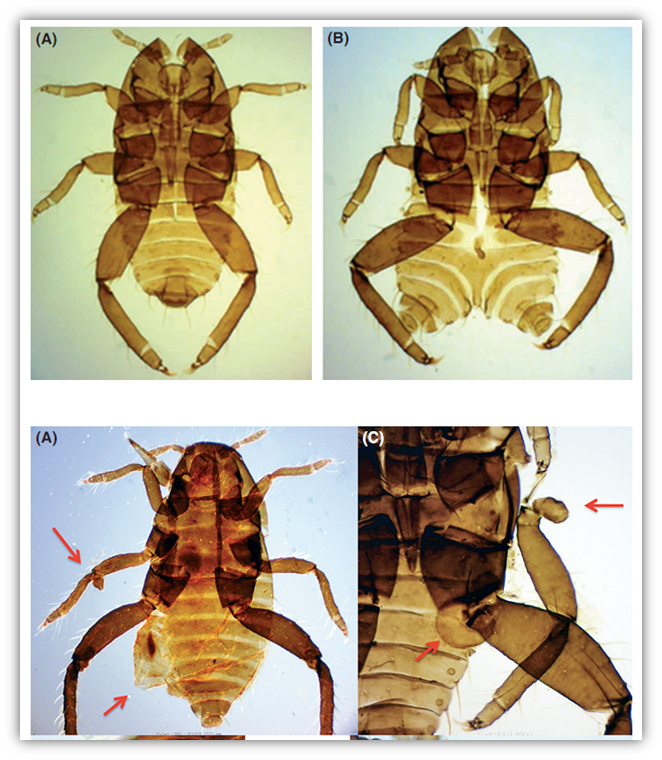 After the nuclear leak at the Fukushima Daiichi Nuclear Power Plant, the Tokyo Metropolitan Government found that 2,300 bec of radiated cesium from beef produced in Minamisoma City, Fukushima Prefecture was nearly five times the tentative standard value of the Japanese Food Sanitation Law. These cows are called “radiation cows”.

According to local farmers, when they evacuated their homes after the nuclear accident, they released the cattle and sheep that they raised so that they could continue to survive.

After several years of spontaneous extinction in the radiation area, relevant research experts discovered the presence of these cattle. Weird spots!

Keshi Okada, an animal science expert at Iwate University, said that large mammals are different from insects and small birds.

The genes affected by radiation are easier to repair, and it is generally difficult to see the effects of radiation on them.

If there is a visible variation in appearance, then nuclear radiation has already had a hard-to-repair impact on animals!

A research team measured the DNA damage level of cattle in this evacuated area within 20 kilometers of the nuclear power plant leak. Damaged lymphocytes in cattle in this area doubled compared to normal.

The data shows that there is an obvious causal relationship between the high levels of DNA damage in the animals in the evacuation area and the Fukushima Daiichi nuclear power plant accident! 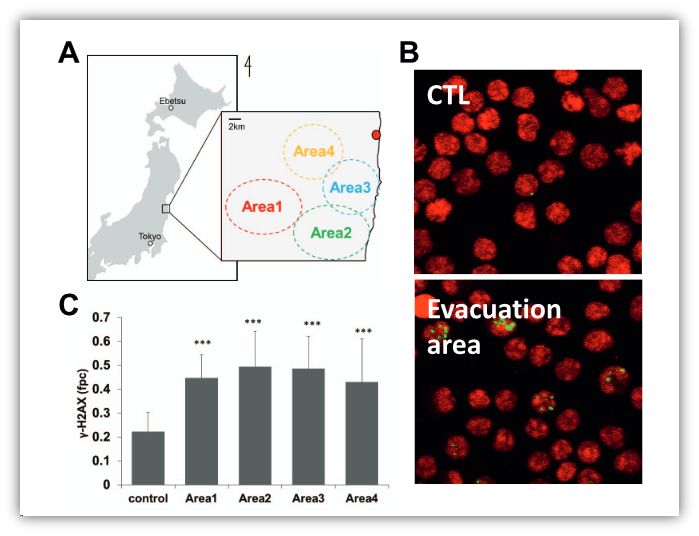 Some wild Japanese macaques live in the area around the Fukushima Daiichi Nuclear Power Plant. In order to measure and control the number of these populations, a research team captured some macaques.

Between May 2013 and December 2014, they conducted hematological analysis of Japanese macaques captured within a 40-kilometer radius of the Fukushima Daiichi Nuclear Power Plant.

Use the ERICA tool to estimate the dose rate of radioactive cesium. Researchers used multiple regression analysis to evaluate the effect of dose rate on peripheral blood and bone marrow hematology values.

In addition, the counts of myeloid cells, megakaryocytes and hematopoietic cells in the femoral bone marrow of mature rhesus monkeys were negatively correlated, and the occupancy rate of adipose tissue was positively correlated with the internal dose rate.

These relationships indicate that continuous low-dose radiation throughout the body can affect the hematopoiesis of Japanese macaques. 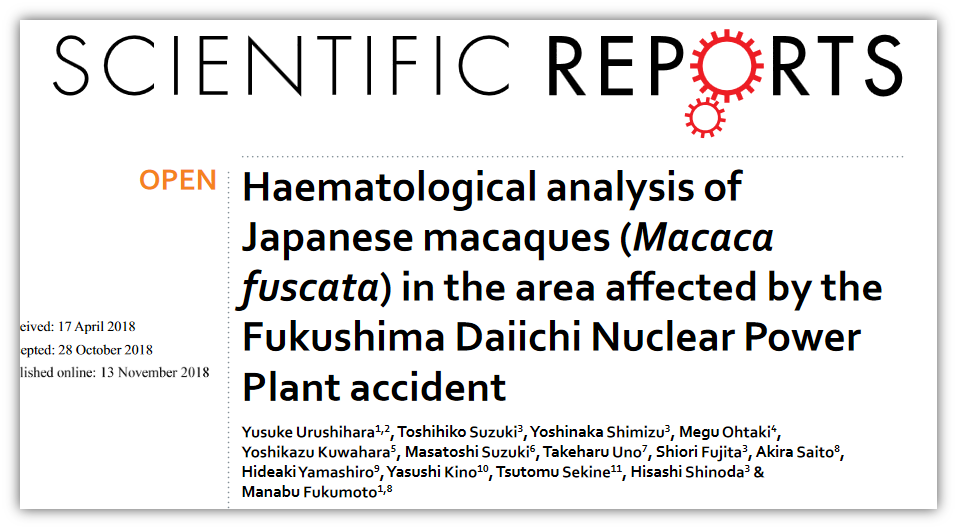 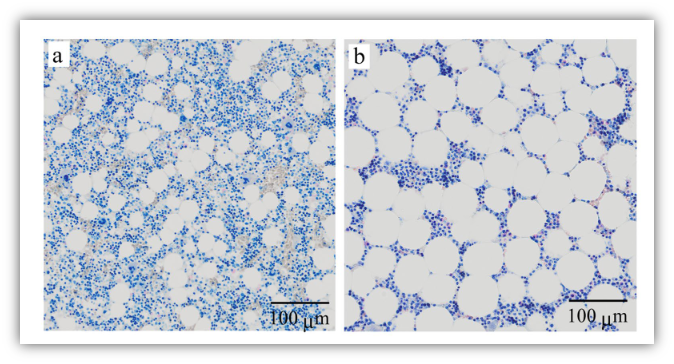 After the accident, the Fukushima Nuclear Power Plant began to implement cleanup measures, including closing the broken roof, removing spent fuel from the damaged reactor, and building a new wall in the coastal area, and building a 1.5-kilometer “ice wall” with frozen soil.

To prevent the groundwater carrying pollutants from flowing from the nuclear power plant to the ocean. After years of cleaning up, except for the sea area near the nuclear reactor where the explosion occurred, the radioactivity in other areas has been reduced to a safe state. Today, Japan has allowed fishermen to fish and other seafood in these waters.

But a new crisis gradually surfaced. Due to the continuous heating of nuclear reactors, nuclear power plants need to continuously use water to cool them, and the radioactive sewage produced in this process is gradually accumulating. And they and the contaminated groundwater have been transported and stored in the sewage treatment tank near the nuclear power plant.

In August 2020, an opinion article published in “Science” pointed out that these treatment tanks also contain a variety of radioactive components, and we need to pay more attention to the potential dangers that may be caused by the release of these sewage into the ocean. Sewage with nowhere to store

There are more than 1,000 radioactive sewage treatment tanks around the Fukushima Power Station.

The sewage mainly comes from the reactor cooling water and groundwater contaminated after contact with surrounding buildings.

In August 2019, TEPCO stated that the capacity of these storage tanks could only last until the summer of 2022 at most.

The two most pressing issues at the moment are how to deal with these radioactive sewage tanks near the nuclear power plant and the impact if more than 1 million tons of treated sewage is released into the ocean.

After these radioactive sewage are processed through a complex cleaning process, a large amount of radioactive isotopes can be removed.

In addition, by transferring groundwater outside the reactor, the amount of polluted water has also been greatly reduced.

At present, the daily water contaminated by nuclear leaks has been reduced to less than 200 tons.

According to Japanese standards, as of December 2019, 28% of the reflective sewage has been purified to a level that can be discharged into the ocean, and 72% of the sewage needs further purification.

Therefore, a committee established by the Japanese government believes that the treated sewage should be discharged into the ocean to make room for more sewage. In these radioactive sewage, there is a kind of isotope-tritium attracts attention.

Although the content of tritium in these radioactive sewage is at the highest level, its half-life is relatively short and it is not easily absorbed by marine animals and seabed sediments.

It is a less harmful radioactive element, and the low-energy beta particles produced by its decay cause little damage to living tissues.

This is also the reason why the Japanese government believes that sewage can be discharged, but is it really okay to do so?

In fact, in addition to tritium, which is difficult to remove, scientists discovered in 2018 that there are some radioactive isotopes in the treated sewage, including carbon 14, cobalt 60 and strontium 90.

Although the content of these isotopes is much lower than that of tritium, their content in different sewage treatment tanks may vary greatly.

According to Tokyo Electric Power Company’s estimates, more than 70% of the treated radioactive sewage requires a second treatment to reduce the radioisotope content before it can meet the standards for release to the ocean. 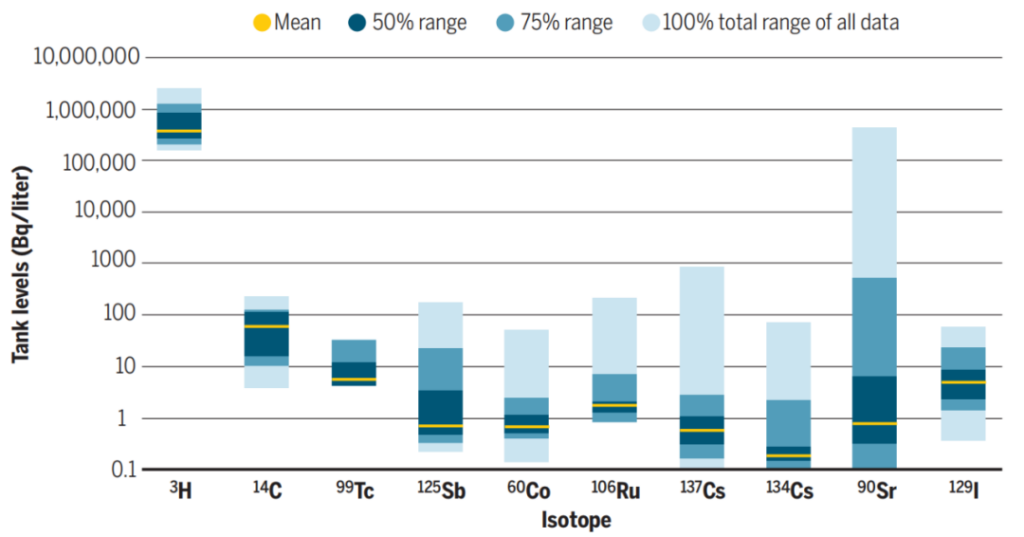 Unlike tritium, they take a longer time to decay, and they easily enter marine sediments and have a strong affinity for marine life such as fish.

These isotopes are potentially toxic to humans and can affect the marine environment in a longer and complex way.

For example, the physiological concentration of carbon 14 in fish may be 50,000 times that of tritium.

While cobalt 60 can be enriched in seafloor sediments, its concentration may rise 300,000 times.

If sewage is discharged into the Pacific Ocean, the radioactive substances in it may damage marine life and human DNA. What will be the consequences afterwards?