The future of CAR-T cell therapy for hematological malignancies

The future of CAR-T cell therapy for hematological malignancies.   As a brand-new treatment plan, CAR-T cells have withstood the test of time in the past thirty years, and many of its products have now been approved by the U.S. Food and Drug Administration (FDA) [6,7].

The advantage of CAR-T cell therapy is the short treatment time required to complete. In terms of long-term remission, it scores higher than other traditional cancer treatments, and patients have a higher quality of life. Compared with stem cell transplantation that also requires active chemotherapy, most patients can quickly recover through CAR-T cell therapy [8]. Unlike TIL and TCR, which rely on the expression of the major histocompatibility complex (MHC) of target cells for antigen recognition, CAR-T cells can recognize specific antigens without being restricted by target cells’ processing of antigens and MHC. It is effective to kill tumor cells in turn [3,9,10].

The process of CAR-T cell therapy The basic process of CAR-T cell therapy involves blood separation, followed by white blood cell separation. We draw blood from the patient and separate lymphocytes (leukocytes). It is then forwarded to the genetic engineering laboratory, and then the gene is inserted into the T cell through an inactive virus/non-viral vector to produce chimeric antigen receptors (CARs) on its surface. These redesigned CAR-T cells were multiplied in the laboratory for approximately 2 to 3 weeks, then frozen and sent for re-infusion [3,6,11,12]. At the same time, we perform conditional chemotherapy to reduce the patient’s white blood cells and lay the foundation for the infusion of melted CAR-T cells. Then, CAR-T cells help kill tumor cells through granzyme/perforin-mediated apoptosis [12,13]. We summarize the production and delivery process of CAR-T cells to patients in the figure below (Figure 3).

CAR technology is being studied extensively and has been developed to successive generations. The first generation CAR contains single-chain variable fragments (scFv), linkers, transmembrane domains and intracellular CD3ζITAM [2,14,15]. The second-generation CAR has additional intracellular costimulatory domains, such as CD28 or 4-1BB receptor (CD 137). The third-generation CAR has two additional costimulatory domains, such as CD 28 or CD 4-1BB and CD134. The fourth-generation CAR-T cells are also composed of various costimulatory components, such as cytokines, antibodies or other functional proteins [14], 15]. They can recognize and remove some antigens that are not recognized by early T cells. The following is a summary of modified and refined CAR-T cells of different generations (Figure 1). 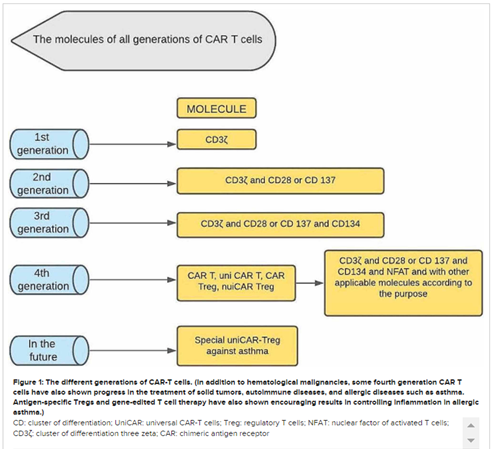 Application of CAR technology in the treatment of hematological malignancies

Professionals have been studying CAR-T cell therapy, including many permutations and combinations, failure/relapse, refractory treatment, and some positive progress made so far. In addition, several of them have been approved by the FDA, including Novartis’ Kymriah, which is mainly used in children and young adults with ALL, as well as in diffuse large B-cell lymphoma (DLBCL). Gilead’s Yescarta, for DLBCL; and Kite’s Tecartus, were accepted as the first CAR-T therapy for r/r mantle cell lymphoma [6,19-22].

Clinical trials around hematological malignancies have shown that CAR-T cell therapy has helped patients with various cancer treatments that have been ineffective for many years. [8] In addition, it can prevent their cancer from getting worse, help them live longer, and in a few cases, they can also benefit from treatments such as stem cell transplantation [14]. However, the limitation lies in recurrence, which may be mediated by antigen escape and the persistence of CAR-T cells [18].

Due to excessive T cell proliferation and the destruction of cancer cells, CRS occurs, which causes an immune response in the body [3,16]. In most patients using anti-CD19 CAR-T cell therapy, neurotoxicity is a side effect. Evidence of neurotoxicity includes endothelial dysfunction, vascular instability, capillary leakage, blood-brain barrier destruction, and disseminated intravascular coagulation (DIC) [3,23,25].

Although research in this field continues to grow, the limited T cell persistence leads to relapse and adverse reactions that have become the bottleneck for the widespread use of this method. Through this review article, we intend to gain insight into the advantages and successful results of CAR-T cell therapy, the barriers to widespread adoption, and the expected ways of ongoing research aimed at preventing drug resistance and recurrence, rather than just focusing on anti- Cancer and recurrence.

In this review, we use PubMed and other electronic databases such as Medline and PubMed Central to search for relevant publications. The keywords entered in the search process include “adoptive immunotherapy”, “hematological malignancies”, “immunotherapy and hematological malignancies”, “CAR-T cell therapy”, “next generation CAR-T cells”, ” Approved CAR-T Therapy” Search articles from January 2014 to November 2020, and then import them into Mendeley to find “Side effects of CAR therapy”, “CAR-T cell design”, “Safety in CAR treatment” Strategy” and “Application of CAR-T Cells in Hematological Malignancies”. After removing duplicates, we reviewed all titles and abstracts using inclusion and exclusion criteria.

Limitations of the wide application of CAR-T cell therapy

After CAR-T cell infusion, because the cells multiply in the body to fight cancer, patients may experience some serious side effects, such as CRS and neurotoxicity [3,6,25,31]. The extent of these side effects (Table 2) and the efficacy of CAR treatment depend on the patient’s previous treatment, the amount of lymph node dissection, the chemotherapy regimen, and the degree of disease at the time of infusion [28,32,33]. 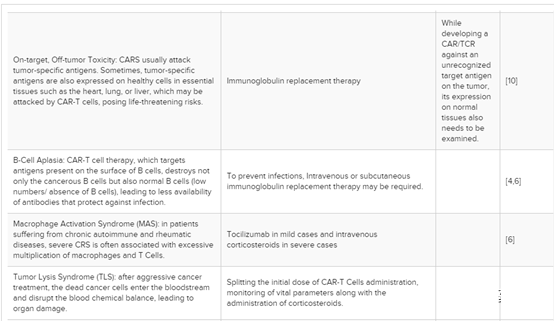 Other factors, such as immunogenicity (in the case of repeated administration, humanized scFvs should be used instead of mouse antibodies to prevent allergic reactions or other serious dysfunctions), immunosuppressive components in the tumor microenvironment, in CAR- Immunosuppressive preconditioning (causing anemia, coagulopathy, and neutropenia) before T infusion may affect the activity and safety of CAR-T cells [10,32]. After the completion of treatment, the rate of cancer recurrence is also an important issue related to the overall efficacy of CAR-T cell therapy [18,38,39].

1) The next generation of CAR-T cells

Researchers are already developing some safety strategies to prevent or reduce the adverse effects of CAR-T cell therapy. T cells produced in this way are called next-generation CAR-T cells [9,28,31,40].
Suicide gene conversion: including the expression of a specific gene in CAR T cells. This gene is used as a “safe suicide gene conversion” (activated by the administration of non-toxic molecules or related monoclonal antibodies). As long as there is development, it will destroy the serious toxicity of CAR-T cells [ 9,31].

In the synthetic split receptor proposed by Lim and colleagues, the time, location and dose of T cell activity can be precisely and remotely controlled by pharmacological regulation. In this system, the antigen binding and intracellular signaling components are separated without small molecules, and begin to assemble after treatment with heterodimerized small molecules. Therefore, the small molecule can be used to effectively control CAR-T cells in vivo, and the magnitude of the response such as target cell killing can be adjusted simply by changing the dose of the small molecule. Another synthetic split receptor by Juillerat et al. The CAR structure can be activated directly in the hinge domain by adding small dimerization molecular drugs. After using the molecular inducer in a dose-dependent manner, the engineered CAR-T cells showed significant cytolytic activity. The development of these new controllable CAR-T cells has created novel and attractive methods to control potential adverse reactions by improving the safety of CAR-T cell therapy in the clinic [9,28].

involves the use of two different CARs to transform T cells, and only after identifying a group of different antigens that are simultaneously expressed on tumor cells can T cells be fully activated. For example, CAR + chimeric co-stimulatory receptor, a combination of bispecific tandem CAR. Normal cells expressing only one of these antigens cannot activate these T cells, thereby significantly reducing the on-target/extra-tumor toxicity [9,28].

The latest development of synthetic Notch (synNotch) receptor helps to avoid natural T cells, thereby overcoming the toxicity of immunotherapy. SynNotch is composed of an extracellular antigen recognition domain (usually a single-chain variable fragment, scFv), a core regulatory region of Notch and an intracellular domain (ICD) [9,28,40]. The SynNotch receptor uses the extracellular domain to recognize the target antigen. However, as seen in CARs, the binding of the target antigen does not trigger T cell activation. The synNotch receptor for one antigen drives the subsequent expression of CARs that target the second antigen. Only when both antigens are present can T cells be activated. T cells with these receptors can improve their effectiveness and safety [9,28].

The bispecific T cell adaptor is constructed by connecting two scFvs through a linker (linker), which can be used with two scFvs at the same time. Specific antibody (scFv) binding [9,28]. One of the scFvs binds to T cells through CD3 receptors, and the other binds to tumor cells through tumor-specific antigens. In the absence of small bispecific molecules, these CAR-T cells have no activity on normal tissues. These cells increase the potency and tumor selectivity of T cells, thereby enhancing their efficacy and safety [9,28]. Blinatumomab, a monoclonal antibody against CD19, was approved in 2014 for relapsed and refractory B-cell ALL. When used with tyrosine kinase inhibitors, they are safe and effective in improving long-term prognosis [31,41].

The application of inhibitory receptors to CAR-T cells is a safety strategy. Inhibitory Chimeric Antigen Receptor (iCAR) is composed of scFv specific for antigens expressed in normal tissues and powerful inhibitory signal transduction domains (from PD-1 and CTLA-4) to limit the activity of extra-tumor T cells . iCAR showed antigen-specific inhibition of T cell activity, cytokine secretion and proliferation in a temporary and reversible manner [9,28,40].

Researchers have tried to combine CAR-T cell therapy with chemotherapy and radiation therapy to overcome the limitations on the use of CAR-T cell therapy, reduce adverse disease reactions, enhance the ability to recognize tumor antigens, and improve CAR-T cells Therapeutic efficacy and persistent T cells [2,41]. The combination of CAR-T cells and checkpoint inhibitor therapy (targets PD-1 and PD-L1, CTLA-4 and B7 interact) can also solve the problem of antigen escape [42].

Other areas to explore

(2) Reforms in T cell manufacturing (for example, reducing the risks associated with the use of viral vectors, including DNA damage, and reducing production costs and production time: replacing them with non-viral-based

(3) Gene editing technology, including the use of non-integrated lentiviral vectors, the recruitment of CAR-T cells through oncolytic viruses equipped with chemokine genes, and the use of CRISPR/cas9 technology to generate CAR-T cells (clustered regularly spaced short Palindrome repeats/CRISPR-related protein 9) and the use of CAR-NK (natural killer) cells [2,44].

In addition to the above technical aspects, to make CAR treatment more accessible, there is another area that needs to be addressed, and that is the huge cost involved. Currently, in the United States, the price of Tiga-Cel (Kymriah) is $475,000, while the price of Axi-Cel (Yescarta) is $350,000, which may not be affordable for most people in the world, which limits this therapy The use of [39]. We have listed various possible solutions to overcome the limitations of CAR-T therapy to help understand and quickly transition to clinical applications (Figure 4). 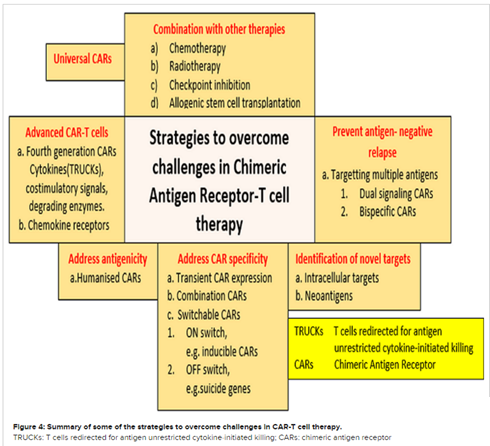 The success of the ELIANA and ZUMA trials has led the FDA to approve several CAR-T cell therapies, leading to gradual research related to the fourth and next generation CAR-T cells, including the latest technologies, which are already at different stages. Clinical trials around the world [45,46]. Only by achieving substantial positive results on a large scale can long-term benefits be established. Therefore, we finally concluded that innovative experimental research is needed to enhance the effectiveness of CAR-T cell therapy, which will provide doctors and patients with information and treatments to eliminate malignant tumors.

In this review, we outline the development status of CAR-T cell therapy, its application in hematological malignancies, its limitations, the latest research progress in coping with challenges, and its application promotion and expansion to existing and various Future research scope of use for other cancer treatments. Through this review, we intend to provide references for students, researchers and colleagues in this field to better understand the current and future trends of CAR-T cell therapy.