Recently, the company announced the latest results of an open-label Phase 1/2 study of a single infusion of gene therapy valoctocogene roxaparvovec (valrox, BMN270) for the treatment of adults with severe hemophilia A.

The five-year clinical data released this time represents the longest clinical experience in gene therapy for hemophilia A.

The 5-year and 4-year post-treatment follow-ups for the 6e13 vg/kg cohort and 4e13 vg/kg cohort, respectively, showed that valrox has sustained therapeutic benefits. All patients in the two cohorts remained free of prophylactic factor VIII treatment.

The decrease in factor VIII activity level is comparable to the observations in recent years, and continues to be within the range that can provide hemostatic effects.

In general, the safety of valrox is consistent with previously reported data, and there were no adverse events related to late treatment. Starting from the first year, all patients continued to stop corticosteroids.

No patients produced factor VIII inhibitors, and no patients withdrew from the study. No patients experienced thrombotic events.

The most common adverse events associated with valrox occur early after a single infusion, and include transient infusion-related reactions and transient, asymptomatic, and mild to moderate increases in the levels of certain proteins and enzymes measured in liver function tests. High, no long-term clinical sequelae.

Michael Laffan, the lead investigator of the Phase 1/2 study, Director of the Hemophilia Center at Hammersmith Hospital, and Professor of the Faculty of Immunology and Inflammation at Imperial College London, said: “This is the latest phase of the ongoing Phase 1/2 study. The data represents the longest lasting clinical experience in gene therapy for hemophilia A, and in most patients in this study, valrox has a hemostasis control time of up to 5 years.

Through this long-term observation, we have further understood the long-term relationship between the expression of factor VIII after a single gene therapy and the low bleeding level without the use of preventive treatment.

Excitingly, in the ongoing valrox study, most of these patients did not have the burden of bleeding and routine infusions for such a long period of time. “

Hank Fuchs, MD, President of BioMarin’s Global R&D, said: “The 5-year continuous and significant bleeding control observed in this study represents a milestone in the development of gene therapy in this patient population, and we feel that Inspire.

We believe that these data, combined with the compelling Phase 3 that we shared earlier this year, demonstrate the superiority of reducing the annualized bleeding rate over the preventive treatment of Factor VIII, and provide strong evidence to support clinical trials. Determination of benefits.

Hopefully, factor VIII levels will continue to remain within a certain range, providing a significant period of hemostasis for most patients.

In view of the continued decline in factor VIII expression, future research on variability and re-dosing remains a key goal. It is an honor and honor to be able to develop the first potential gene therapy for hemophilia A. “ 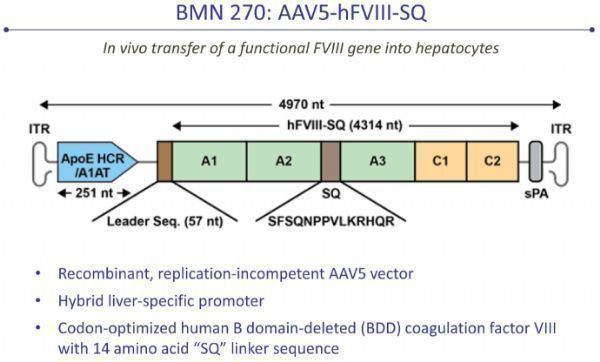 Hemophilia A, also known as factor VIII (FIII) deficiency or classic hemophilia, is an X-linked genetic disease caused by the absence or deficiency of coagulation factor VIII. Patients will experience repeated persistent or spontaneous bleeding, especially In joints, muscles or internal organs, it can cause disability in the long term. At present, the standard of care for severe hemophilia A is a preventive treatment plan of intravenous infusion of coagulation factor VIII 2-3 times a week.

Valrox is a gene therapy based on adeno-associated virus (AAV) developed for the treatment of hemophilia A. The therapy restores the production of VIII by delivering the functional gene of coagulation factor VIII into the patient, thereby eliminating or reducing the need for intravenous VIII infusion. If approved, valrox will mark a major milestone in the treatment of hemophilia A. This pioneering therapy has the potential to enable patients to achieve “one-time-and-all” treatment results.

Valrox is the world’s first hemophilia gene therapy to enter regulatory review, and is used to treat adults with severe hemophilia A. Previously, valrox has been granted Breakthrough Drug Designation (BTD) and Regenerative Medicine Advanced Therapy Product (RMAT) by the US FDA, Priority Drug Designation (PRIME) by the European Union EMA, and Orphan Drug Designation (ODD) by the FDA and EMA.

However, in August and September 2020, valrox encountered obstacles in the supervision of the United States and Europe, requiring more data from phase 3 clinical trials.

In Europe, BioMarin plans to submit a marketing authorization application (MAA) for valrox treatment of severe hemophilia A to the EMA in June 2021 based on the positive feedback from the European Medicines Agency (EMA) earlier this year. Based on one-year results of Phase 3 GENEr8-1 study.

In the United States, BioMarin plans to submit 2-year follow-up safety and efficacy data for all patients in the GENEr8-1 study in response to the FDA’s request for these data to support its benefit and risk assessment of valrox. BioMarin’s goal is to submit a Biological Products Licensing Application (BLA) to the US FDA in the second quarter of 2022, provided that the research results are good, and the FDA will then conduct a six-month priority review process.