PNAS: Why do women live longer than men?

PNAS: Why do women live longer than men?  It may be difficult for people to change their biological makeup, but at least they can choose a healthy lifestyle while striving to create a society where both men and women have the opportunity to maximize their health potential.

But is this conclusion reliable? How did it come out?

Recently, a research team from the Interdisciplinary Centre on Population Dynamics of the University of Southern Denmark published an article titled: Death rates at specific life stages mold the sex gap in PNAS, Proceedings of the National Academy of Sciences. Life expectancy’s paper.

From the perspective of demographics, they analyzed the “story” behind “women live longer than men” from three aspects: different age groups, different ages, and different countries’ populations. It turns out that the mortality rate of men in the 15-40 age group is usually two to three times higher than that of women. And over time, the difference in lifespan/mortality between men and women has diminished!

This study is based on the Human Mortality Database (the Human Mortality Database) data. The researchers specially selected four representative national population data, namely Japan (the country with the longest population) and the United States (the population life expectancy is not as high as other countries). Income countries), Sweden (the country with the highest quality of life for the population), and Russia (the death rate of the population has stagnated and deteriorated during the transition from socialism to a market economy). 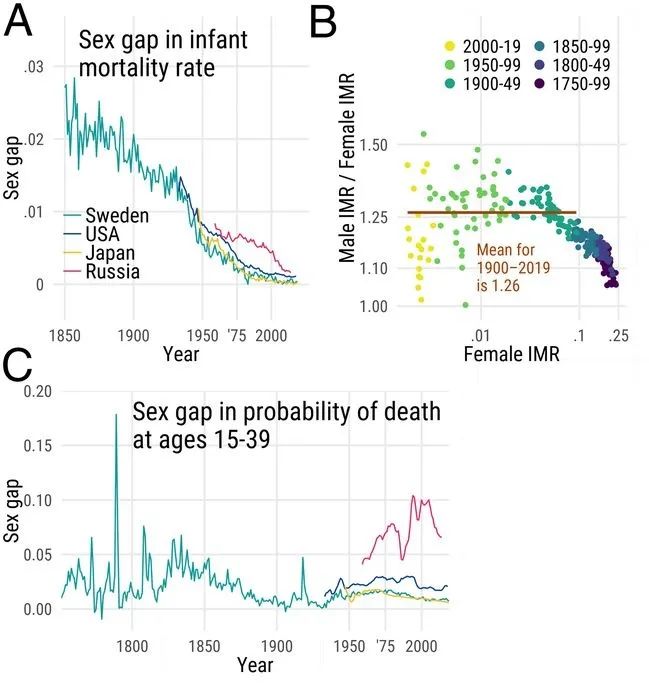 Surprisingly, although the 15-40 age group has the highest mortality rate between men and women, the gender difference in mortality in this age group is not the highest. On the contrary, it starts from infancy and decreases with age, and then From around 10 years old, it will increase with age. (As shown in Figure C above)

In addition, the researchers also compared in detail the differences in male and female mortality rates in different years in the four countries. 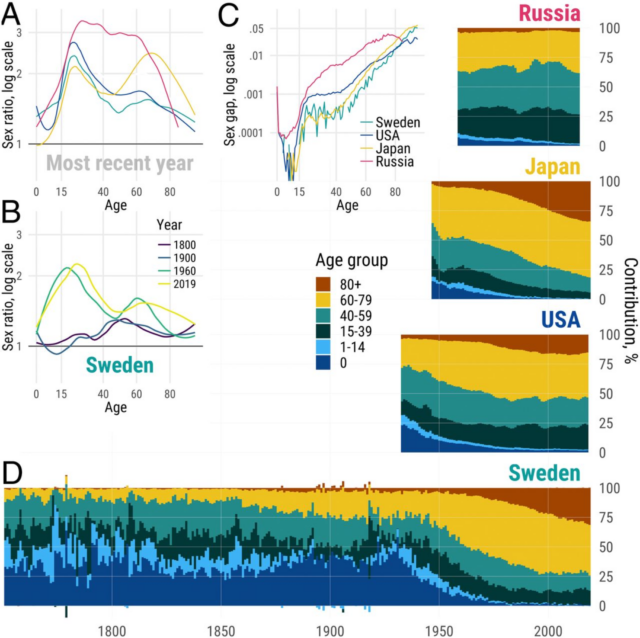 The first is that among infants, the gender difference in mortality has almost disappeared by 2000 over time (Figure A above). But in sharp contrast, the male infant mortality rate has been rising and reaching a peak, which shows that the mortality rate of female infants is usually lower than that of male infants around the world.
(Above B).

So, knowing the above-mentioned data, what enlightenment or help does it have on the difference in life expectancy between men and women? The researchers made several conclusions in the paper.

First of all, these data show that before 1950, the excessive death of male infants was the biggest cause of the gender gap in mortality, while infants seemed to behave similarly (that is, the impact of acquired life can be excluded), so it is very Possibly, this difference in mortality between men and women is directly derived from biological factors. In other words-the difference in life expectancy between men and women at that time was more natural.

Secondly, today, the high mortality rate of men over 60 has a more significant impact on the overall gender gap. Investigating the reason, the author of the paper believes that it may be caused by external factors such as living habits (such as smoking), social background, and epidemics.

In fact, there are some previous evidences that are consistent with the conclusions of this study. For example, male fetuses are biologically more fragile than female fetuses, and mothers of male fetuses are more likely to have pregnancy complications. These gender differences at birth provide a basis for biologically explaining male disadvantages in life expectancy.

Some scholars also believe that sex hormones play a vital role in extending women’s lifespan. The female sex hormone estrogen can prevent cardiovascular disease, and a stronger immune system in women is another factor that may lead to longer lifespan-compared to men, women are known to produce more antibodies. This provides women with the ability to resist respiratory, bacterial and viral infections.

But in fact, the gender gap in global life expectancy has narrowed in recent years compared with the past. On the one hand, compared with the past, more and more women are doing well at work, and staying up late and working overtime frequently occur. At the same time adopt some harmful lifestyles, such as smoking and drinking. On the other hand, the improvement of modern medical standards may make up for the biological life gap to a certain extent.

All in all, it may be difficult for people to change their biological makeup, but at least they can choose a healthy lifestyle while striving to create a society where both men and women have the opportunity to maximize their health potential.