Leukemia is about to bid farewell to the era of chemotherapy?  TG Therapeutics is a biopharmaceutical company dedicated to the development of innovative therapies for B cell-mediated diseases.

Recently, the company announced that the U.S. Food and Drug Administration (FDA) has accepted a biological product license application (BLA) for ublituximab, combined with Ukoniq (umbralisib) (U2 program), for the treatment of chronic lymphocytic leukemia (CLL) and small cells Patients with lymphoma (SLL).

FDA has designated the “Prescription Drug User Fees Act” (PDUFA) target date as March 25, 2022. The FDA also notified the company that it currently does not plan to convene an advisory committee meeting to discuss this application.

If approved, the U2 regimen will provide a new, chemotherapy-free regimen for patients with relapsed/refractory (treated) CLL/SLL who have not previously received treatment (initial treatment) and previously received treatment. In the U2 protocol, ublituximab is a new glycoengineered anti-CD20 monoclonal antibody that targets a unique epitope of the CD20 antigen on mature B lymphocytes. Ukoniq is an oral, once-daily, new-generation PI3Kδ inhibitor that uniquely inhibits CK1-ε, which may allow it to overcome some of the tolerance problems associated with the first-generation PI3Kδ inhibitor.

In February 2021, Ukoniq (umbralisib, 200mg tablets) received accelerated approval from the US FDA for the treatment of: (1) Patients who have received at least one relapsed or refractory marginal zone lymphoma (MZL) based on an anti-CD20 regimen (2) Adult patients with relapsed or refractory follicular lymphoma (FL) who have received at least 3 systemic therapies. In terms of medication, the recommended dose of Ukoniq is 800mg (4 tablets), taken once a day orally with food.

It is worth mentioning that Ukoniq is the first and only oral, once-daily, phosphoinositide-3-kinase δ (PI3K-δ) and casein kinase 1 approved for the treatment of relapsed/refractory MZL and FL. -ε (CK1-ε) dual inhibitor.

U2 BLA is based on the positive results of the global phase III UNITY-CLL trial. The trial was carried out in patients with previously untreated (naïve) and relapsed/refractory (treated) chronic lymphocytic leukemia (CLL). It evaluated the efficacy and safety of the U2 regimen, and compared it with obinutuzumab + chlorambucil The scheme (O+Chl) was compared. The trial was conducted in accordance with the Special Program Evaluation (SPA) agreement with the FDA.

The detailed data of the trial was announced at the annual meeting of the American Society of Hematology (ASH) in December 2020. The results showed that the trial reached the primary endpoint: according to the independent review committee (IRC) assessment, a median follow-up of 36.7 months, compared with the O+Chl treatment group, the U2 treatment group had a statistically significant progression-free survival (PFS) Significant improvement in significance (median PFS: 31.9 months vs 17.9 months; HR=0.546; p<0.0001).

In addition, the overall response rate (ORR) of the U2 group was significantly higher than that of the O+Chl group (ORR: 83.3% vs 68.7%; p<0.001). In terms of safety, for the U2 group, when the median treatment exposure time is 21 months, the severity of most adverse events (AE) is Grade 1 or Grade 2, and is relatively between the newly treated and treated patients balance.

Chronic lymphocytic leukemia (CLL) is the most common type of adult leukemia. It is estimated that in 2020, 45,000 new cases of CLL will be diagnosed worldwide. Although the symptoms and signs of CLL may disappear for a while after the initial treatment, the disease is considered incurable and many patients will require additional treatment due to the recurrence of malignant cells.

Ublituximab is a new type of glycoengineered anti-CD20 monoclonal antibody that targets a unique epitope of CD20 antigen on mature B lymphocytes. This epitope is different from many CD20 monoclonal antibodies currently on the market, including ofatumumab, ocrelizumab/rituximab, obinutuzumab (GA101). Currently, ublituximab is in phase III clinical development for the treatment of CLL and multiple sclerosis (MS).

Umbralisib is a dual-effect inhibitor of PI3Kδ and CK-1ε, which may allow it to overcome some of the tolerance issues associated with the first generation of PI3Kδ inhibitors. Phosphatidylinositol-3 kinase (PI3K) is a class of enzymes involved in cell proliferation and survival, cell differentiation, intracellular transport and immunity and other cellular functions. PI3K has four subtypes (α, β, δ, and γ), among which the δ subtype is strongly expressed in cells of hematopoietic origin and is often associated with B cell-associated lymphoma. 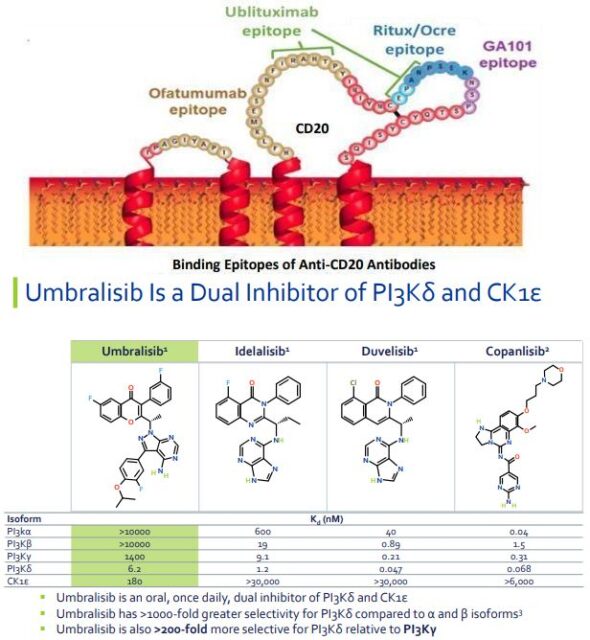 Umbrasib has nanomolar potency for the delta subtype of PI3K, and has high selectivity for the alpha, beta, and gamma subtypes. Umbralisib also uniquely inhibits casein kinase 1-ε (CK1-ε), which may have a direct anti-cancer effect, and may also modulate T cell activity associated with immune-mediated adverse events observed in previous PI3K inhibitors.