Illustrated:  What is the Immunometabolism and the relationship with T cells?

What is the Immunometabolism and the relationship with T cells?  The rapidly developing field of immune metabolism has solved many biological problems concerning the development, fate and behavior of immune cells.

The advantages of using the immune system to discover metabolic processes are as follows:

1) Most immune cell populations are dispensable for normal organ development (except for organizing macrophage aggregation, monitoring and modifying most cells);

2). Most immune cell populations can usually be produced in large quantities or highly purified;

3). Most immune cell populations can use specific strategies to target them;

4). Most immune cell populations can be separated and separated between animals.

One of the main problems of immune metabolism involves the need to quickly distinguish between cells that are in the division cycle or activation, or cells that are in the quiescent phase or that play a surveillance role. The characteristics of the former are closely related to carcinogenically transformed malignant cells and embryonic stem cells, which import and consume large amounts of glucose to produce substances (Warburg-type metabolism). In contrast, the latter uses fatty acid oxidation and the tricarboxylic acid cycle to generate energy.

Changing the specific pathway components (TORC1, TORC2, PTEN, AMPK, Pl3K) of the immune metabolic cycle through genetic or pharmacological methods is a useful way to change cell behavior and change fate. Biochemical strategies can help to further reveal the specific metabolic requirements for immune response and solve the problems related to the production and metabolism of metabolites. 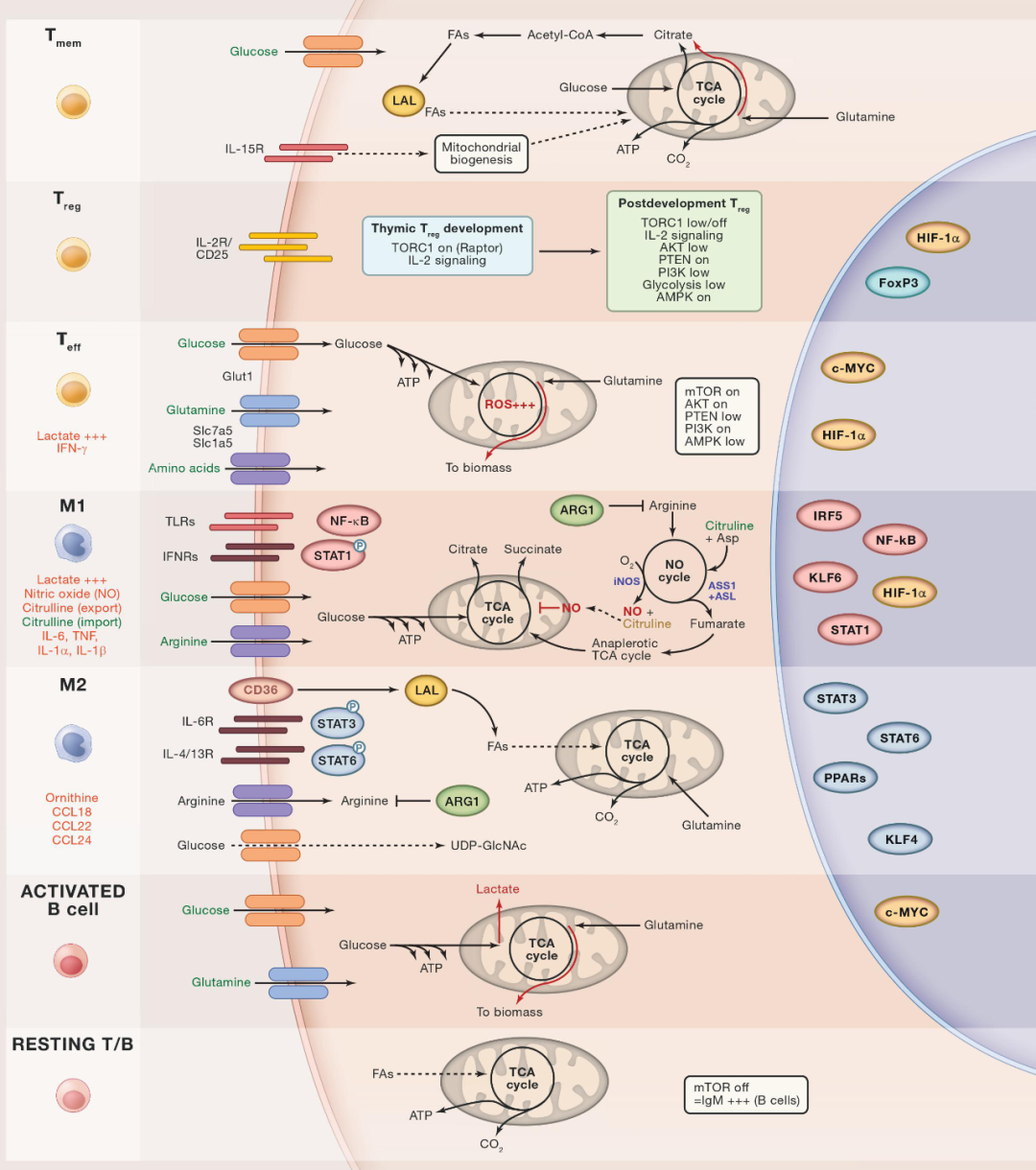 Static lymphocytes mainly rely on fatty acid and glucose metabolism. Teffectors (Teff) exert their effects after being activated by antigens through T cell receptors and through costimulation of mTOR-dependent processes including increased aerobic glycolysis (Warburg-type metabolism). Activated Teff cells undergo multiple cell divisions and convert glucose and glutamine into biological substances. This process requires the intake of a large amount of amino acids and depends on the TORC1, Pl3K and AKTde pathways. Therefore, in terms of metabolic requirements, Teff cells are similar to oncogenic transformed cells, and aerobic glycolysis can also be used as mRNA binding proteins to mediate the effective translation of encoded effector cytokines (such as IFN-γ).

Memory T (Tmem) cells maintain healthy mitochondria by synthesizing and then oxidizing FA to maintain OXPHOS, thereby keeping them in a static state for a long time. CD8+ cytotoxic T cells treated with TORC1 inhibitor rapamycin have the function of Tmem cells and exit The static state requires TORC1 signaling.

Regulatory T (Treg) cells rely on FoxP3 and can perform highly specific genetic testing for the metabolic needs of Treg. The mice lacking mTOR in all T cells have a phenotype similar to Treg, and mTOR signal transduction is considered to be opposite to the Treg phenotype. Similarly, AKT activation will prevent Treg, but Raptor (part of TORC1) will cause defects in the number and function of Treg.

Therefore, the development and function of Treg seem to be strongly dependent on specific metabolic cues at a specific time: Although TORC1 and glycolytic pathway must be inhibited to enable Treg to perform its full function, the expansion of Treg requires the participation of TORC1 and glycolytic pathway. . Other metabolic pathways that affect Treg function include essential amino acids such as arginine, which help transform Teff into a more easily regulated state.

Once stimulated to produce antibodies, B cells will be glycolyzed (the TCA cycle in the figure), so an enlarged endoplasmic reticulum must be constructed to secrete antibodies. Blocking mTOR in the ongoing B cell response will produce antibodies, with lgM higher, indicating that metabolism is related to the antibody category.

M1 macrophages activated by pathogen products and type I IFN (interferon) have glycolytic and antimicrobial effects, and have the potential to destroy tissues. Most of the M1-like macrophages at the site of inflammation originate from bone marrow inflammatory monocytes, so they can be replaced without self-renewal.

The main product of M1 macrophages is NO (carbon monoxide), which requires the input of arginine and oxygen. The products of the nitric oxide synthase reaction (mediated by iNOS (inducible NO)) are citrulline and NO. It is worth noting that citrulline is first exported and then re-imported as needed to regenerate arginine and maintain NO production; this cycle forms part of the anergic TCA cycle of M1 cells, which may also lead to mitochondrial respiratory activity Attenuation (in dendritic cells derived from monocytes). ARG1 induced by a complex TLR-dependent indirect mechanism prevents this reaction by hydrolyzing arginine. In addition to NO, the main products of M1 macrophages are cytokines, chemokines, metalloproteinases and antimicrobial metabolism of itaconate.

The TCA cycle is fragmented in M1 macrophages, which is related to the accumulation of succinate, which has a pro-inflammatory effect by stabilizing HIF1α (hypoxia-inducible factor 1-α). In related dendritic cells, glucose-derived citrate is used to support increased fatty acid synthesis, which is essential for activation.

M2 macrophages do not produce NO, but use ARG1 (arginase 1) to hydrolyze a large amount of imported arginine. Although the products of this reaction are ornithine and urea, the main function of arginine consumption by M2 macrophages is to limit the supply of adjacent arginine auxotrophs: therefore, M2 macrophages have immunomodulatory effects and Teff can be inhibited by preventing its supply of arginine. M2 macrophages use FA (fatty acids) mainly derived from triglycerides to support OXPHOS, have a complete TCA cycle, and produce a large amount of glycosylated proteins, which require glucose to provide UDP-GlcNac (uridine diphosphate). N-acetylglucosamine).