Science: The stomach is not good because because you eat too much sugar?

Science: The stomach is not good because because you eat too much sugar?  Sugar is a direct source of sweetness. It not only makes food more palatable, it is also an important source of energy for the body. In daily life, whether it is milk tea, cakes or cola, all contain a lot of sugar, which gives us a “sweet” feeling.

However, “too much is not enough.” Studies have shown that eating too much sugar can increase the health risks of the body. A high-sugar diet can lead to obesity, insulin resistance, diabetes, atherosclerosis, hyperlipidemia and hypertension and other diseases, and accelerate people’s health. Aging and increase the risk of heart disease.

On October 28, 2020, researchers from the University of Texas Southwestern Medical Center and Anderson Cancer Center published a titled: Dietary simple sugars alter microbial ecology in the gut and promote colitis in mice in the journal Science Translational Medicine. Research papers.

In Western countries, colitis is an important public health problem. It can cause persistent diarrhea, abdominal pain, and rectal bleeding. According to the US Centers for Disease Control and Prevention, the number of American adults with inflammatory bowel disease (IBD) jumped from 2 million in 1999 to 3 million in 2015, and colitis has also begun to appear in children.

It is worth noting that sugar, especially glucose in high-fructose corn syrup developed by the food industry in the 1960s, is considered to be the main suspect for inducing inflammatory bowel disease (IBD). After the development of high-fructose corn syrup, it has been widely used. Used in soft drinks and other foods, at the same time, the incidence of inflammatory bowel disease (IBD) has increased in Western countries, especially in children.

In this study, the research team explored the effects of monosaccharides such as glucose and fructose on the onset of colitis in wild-type and IL10−/− mice (which are more prone to colitis).

The researchers found that if mice were given a high-sugar diet in advance, whether wild-type mice with drug-induced colitis or IL10−/− mice genetically prone to colitis would have more severe colitis symptoms.

Immediately afterwards, the researchers used gene sequencing technology to determine the differences in the number and type of colonic intestinal flora before and after the mice received a high-sugar diet.

They found that after 7 days of a high-sugar diet, the composition of the gut microbiota of the mice fed with sucrose, fructose, and especially glucose changed significantly.

Among them, some common bacteria that are considered to be beneficial to the body, such as lactic acid bacteria, have been significantly reduced; at the same time, some known bacteria that can produce mucus-degrading enzymes, such as Akkermansia muciniphila, are in number increase. The mucinase produced by these harmful bacteria will erode the protective mucus layer of the colon of mice, eventually causing the mice to develop more severe colitis. 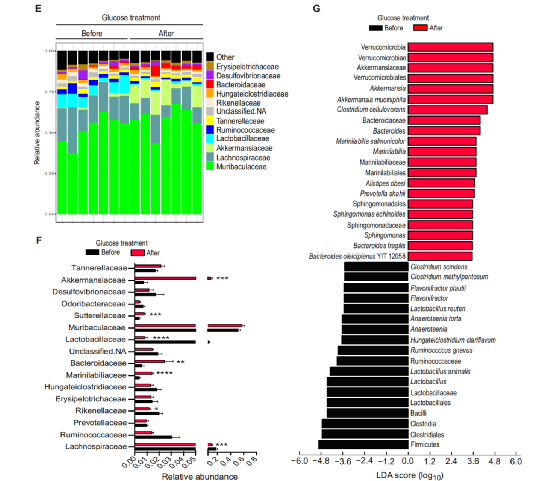 The first author of the paper, Shahanshah Khan, explained: The mucus layer protects the intestinal mucosal tissue from the penetration and erosion of intestinal microbes. Therefore, in glucose-treated mice, the high abundance of mucus-degrading bacteria will protect the intestinal mucus barrier of mice. Cause damage, and breaking the epithelial barrier is the key initiation event of intestinal inflammation.

The pathogenesis of sugar-induced colitis depends on the gut microbiota

In this regard, the corresponding author of the paper Hasan Zaki said: This study shows that a high-monosaccharide diet can profoundly change the composition of the intestinal flora, of which glucose has the greatest impact. The intestinal flora of humans and mice changes rapidly with changes in diet, leading to a series of consequences.

In summary, these data indicate that the intake of simple sugars can easily lead to colitis and increase the risk and extent of the disease by regulating the intestinal flora of mice. Finally, the research team stated that they are planning to study whether and how high sugar intake affects the development of other inflammatory diseases, such as obesity, fatty liver disease, and Alzheimer’s disease.

With the improvement of living conditions brought about by social progress and economic development, the incidence of colitis, which originally had a high incidence in developed countries, has been increasing year by year in China, and it has reached the point where attention must be paid. This study also reminds us that high-sugar diets not only cause obesity and a series of problems caused by obesity, but also directly affect the intestinal flora and cause intestinal diseases. This research clearly shows that you really have to pay attention to your diet at all times.