SARS-CoV-2 Trimeric Spike Protein Used in Serological Detection of COVID-19.  The immune response is the first line of defense against the severe acute respiratory syndrome coronavirus 2 (SARS-CoV-2) infection that has caused the COVID-19 pandemic.

Recently, a very powerful and accurate serological enzyme-linked immunosorbent assay (ELISA) was developed to detect antibodies in patient serum and was approved by the US FDA for use.

However, the use of human embryonic kidney (HEK) Expi293 to express spike-like trimers has a very low concentration, which limits its widespread use as the preferred antigen in serological testing for COVID-19.

Therefore, we use improved vector engineering and production process strategies, and use Chinese hamster ovary (CHO) cells as the preferred production host to create a stable recombinant spike platform.

For difficult-to-express (DTE) proteins, the transient production process needs to be adjusted to eliminate the protein-specific negative effects of overexpression of recombinant genes in host cells.

Using the plasmid structure of the Krammer laboratory, HEK Expi293F and CHO-S cells were transfected with CAG-driven expression plasmids, using polyethyleneimine (PEI), in both cases the spike mutation was performed at the optimal gene dosage In addition, we use mild low temperature conditions, which is an effective process engineering intervention for the production of DTE protein and extending the life of the culture (Figure 1a, b).

As shown in Figure 1c, when the culture temperature was lowered from 37°C to 32°C, the qP of HEK cells and CHO cells increased several times, and the spike titer was further increased by increasing cell accumulation. By SDS-PAGE gel electrophoresis, the CHO-derived spikes showed a monomer molecular mass of 200 kDa (Figure 1d).

The preliminary COVID-19 antibody serological test proved its suitability for ELISA (data not shown), allowing the development of a stable CHO production platform. 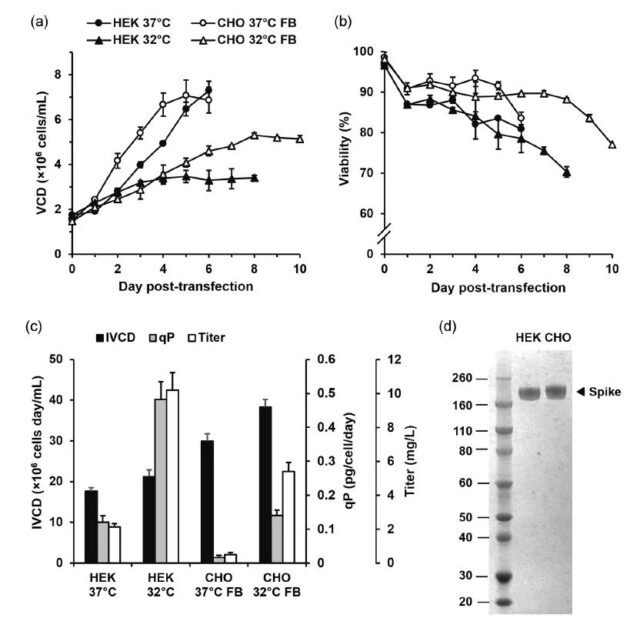 However, for DTE protein, transient expression systems with very low yields may be an early sign of a decrease in stable production.

In addition, since the low-level expression of the sub-UPR threshold may be necessary to allow the cells to grow fully, we have reason to expect that the application of Markov induced expression technology and the use of an enhanced biphasic culture system to turn on the production of spikes will maximize the It is particularly useful to improve stable production (Figure 2b, c). 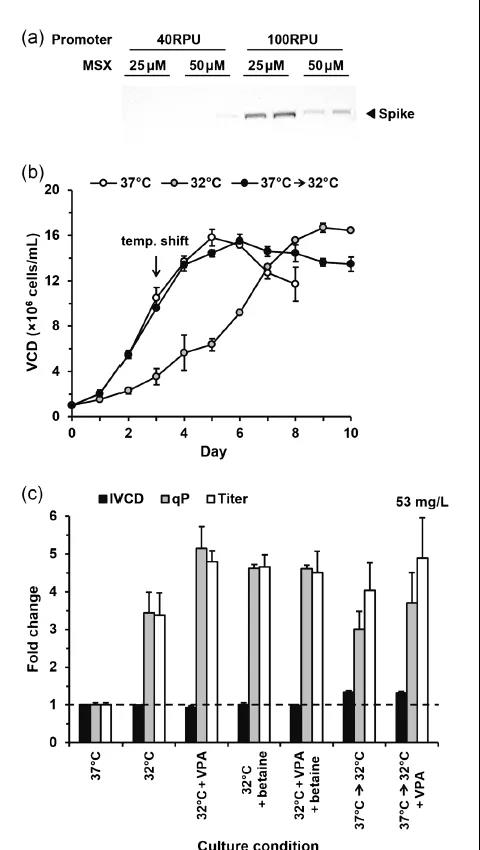 In order to purify the spike protein from the culture supernatant, IMAC was initially performed using a step elution method of 250 mM imidazole.

Figure 3a shows the SDS-PAGE of the eluted protein and reveals the presence of protein impurities not derived from recombinant spikes (Figure 3b), which were identified as CHO host cell-derived proteins (HCPs) by tandem mass spectrometry.

Although all identified extracellular HCPs have previously been shown to exist in the culture supernatant of CHO cells, HSPG in particular has been reported to appear in CHO cells at a relatively higher level than HEK cells, indicating the need for improved purification under high IVCD method.

In order to improve the purity of recombinant spikes, we implemented a revised gradient elution curve up to 250 mM imidazole. 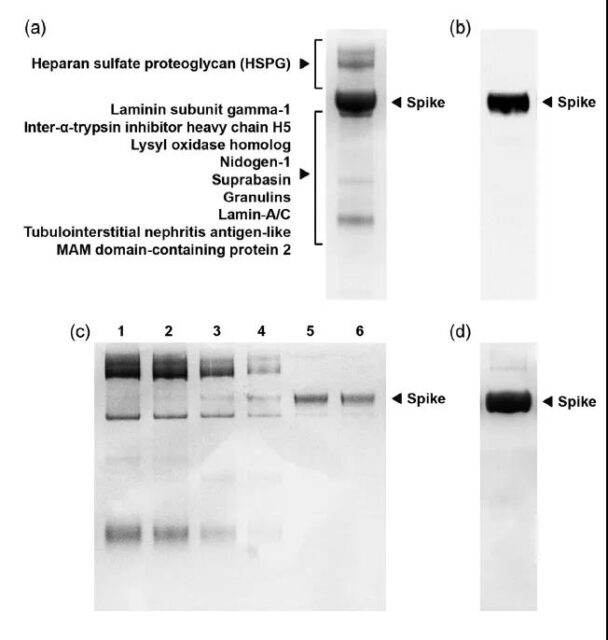 The COVID-19 antibody test will help reveal the true scale of the influenza pandemic in the population and the persistence of immunity, and whether vaccines designed to protect against infection (many of which are based on the production of neutralizing antibodies against spike proteins) are effective. And to identify high-response human donors for use in convalescent plasma therapy.

The CHO-spur anti-SARS-CoV-2 ELISA was developed based on the analysis of Krammer’s laboratory and passed the ISO 15189 medical laboratory standard verification. We took 234 negative serum samples (collected before the outbreak of COVID-19) and 26 positive serum samples (collected ≥15 days after the PCR test was positive) to evaluate the detection performance. The overall sensitivity of the anti-SARS-CoV-2 antibody was 92.3 % (Figure 4a,b).

In general, we provide an example for the use of CHO cells to develop characteristic and difficult-to-express spike manufacturing platforms.

Although it may be easier to produce “monomers”, the natural trimer structure of the SARS-CoV-2 surface spike protein is more suitable for optimal serological analysis and research. 1 mg of spikes can provide about 3,500 For serological analysis of patient samples, its fast and scalable transient platform is sufficient for local population antibody testing and research.

In addition, the cell and process engineering interventions designed for SARS-CoV-2 spurt production are likely to be universally applicable to spurts from different coronavirus strains.