On June 21, 2021, Dr. Fauci, Chief Medical Adviser of the White House and Director of the Institute of Allergy and Infectious Diseases of the National Institutes of Health (NIH), stated that the new coronavirus Delta mutant strain (B.1.617.2, That is, the second-generation mutant strain in India) constitutes the new biggest threat.

Dr. Fauci’s conclusion is based on the latest virus strain sequencing showing that in the last two weeks (as of June 19), the Delta mutant strain has accounted for 20% of the new coronavirus infections in the United States; and two weeks ago (June 5) Day) is only 10%.

Dr. Fauci’s worries come from the current situation in the UK that continues to deteriorate.

On June 21, 2021, Helix uploaded an article on medRxiv to corroborate Dr. Fauci’s assertion. 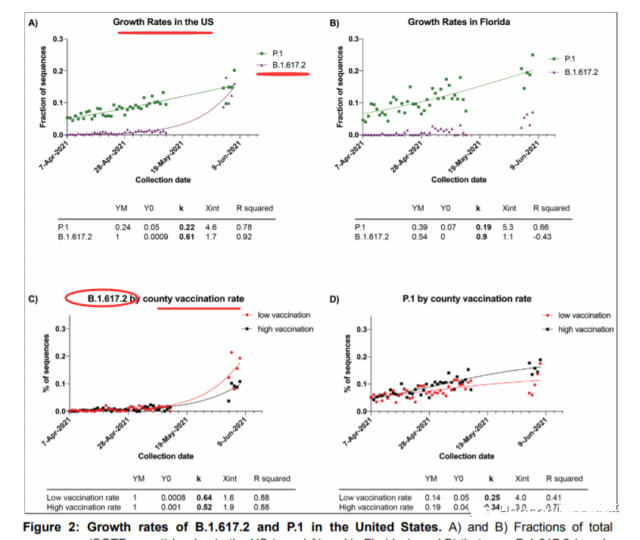 On June 22, 2021 (just now), Trevor Bedford updated the prevalence of mutant strains in the United States.

At present, 95% of newly detected infections in the United States are more serious VOC mutant infections. Delta is growing at a rate of 0.26-0.56/week in all major states. Alpha (B.1.1.7) is about 5,000 new cases per day, and Delta is close to 2,000. The transmission coefficient Rt of other mutant strains is basically lower than 1; while Delta is significantly higher than 1, currently it is mainly prevalent in unvaccinated people. 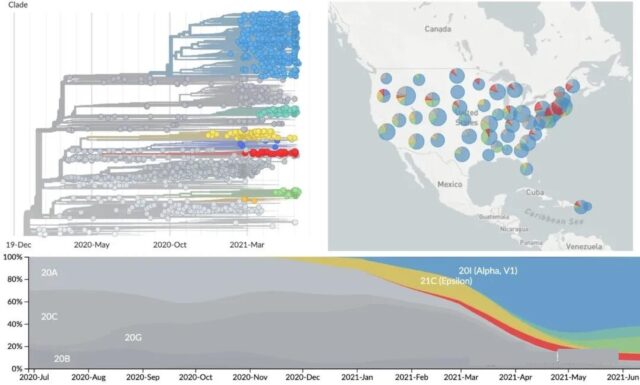 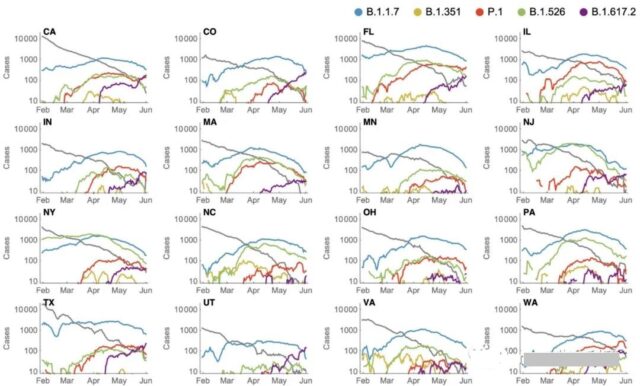 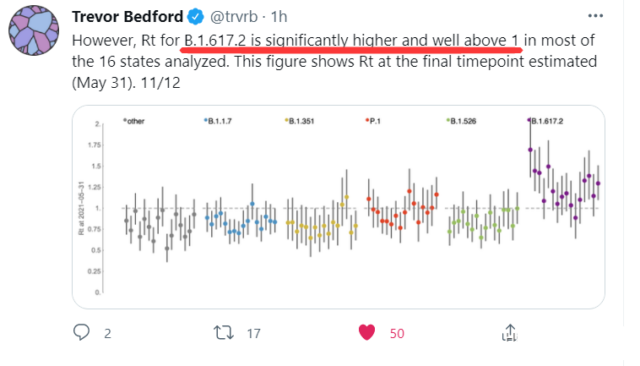 (The Rt of the Delta mutant strain is higher than 1)

How powerful is the Delta mutant?

The Delta mutant strain is the second generation mutant strain B.1.617.2 in India. Its spread is 60% higher than that of the Alpha mutant, and its resistance to neutralizing antibodies is similar to the highest B.1.351.

B.1.617 mutant strains have common characteristic S antigen (including RBD) mutations D111D, G142D, D614G, L452R, E484Q and P681R. Structural analysis of the Furin cleavage site and RBD mutations L452R, E484Q, and P681R revealed that these mutations may increase the ability of RBD to bind to ACE2 and increase the rate of S1-S2 cleavage, which leads to viral replication and infection. Sexual enhancement.
Compared with the first-generation Indian mutant strain B.1.617, the second-generation mutant strain B.1.617.2 (the Delta mutant strain) has a significant increase in the number of mutations; especially, a large number of mutations have been added to the S antigen. Although it does not have E484Q of B.1.617, it has a new mutation T478K (the figure below).

On June 13, 2021, Eric Topol updated on Twitter to summarize the characteristics of four types of mutant strains (VOC) that the World Health Organization focuses on.

The Delta mutant strain has higher transmission characteristics than the Alpha (B.1.1.7) mutant strain and the highest resistance to neutralizing antibodies similar to B.1.351.

How to deal with the Delta mutant strain?

On June 14, 2021, Lancet published a blockbuster article by the University of Edinburgh, reporting on the real-world effects of AstraZeneca and Pfizer/BioTech vaccines against the Delta mutant strain (the second generation Indian mutant strain B.1.617.2) in Scotland. Protection.

The protective power of vaccines for humans is not only limited to preventing infection with Delta mutant strains, but also to reduce critical illness and death.

According to data from the Department of Public Health of the United Kingdom, the AstraZeneca and Pfizer vaccines currently used in the UK are both more than 90% protective against hospitalizations from Delta mutant infections.

On June 21, the World Health Organization (WHO) announced that the Delta mutant strain has spread to 92 countries/regions in the world.

Trevor Bedford’s recent report on the progress of the US epidemic not only shows a worrying display, but also gives the key to the problem: Delta mutant strains are currently prevalent in unvaccinated people.

Regarding the response plan, Dr. Lee of Helix said:

“At the end of the day, being vaccinated is still the best – and potentially, at this point, the only – tool we have,”

In the final analysis, vaccination is still our best and currently the only tool.