The press release on its official website pointed out that this is the first tumor immunotherapy with positive results in a Phase 3 clinical trial of adjuvant treatment of early lung cancer. The FDA is expected to make an approval decision before December 1, 2021.

Prior to this, Tecentriq (atezolizumab) has been approved by the European Commission and the FDA for the first-line treatment of patients with metastatic NSCLC with high PD-L1 expression and without abnormal EGFR and ALK mutations. 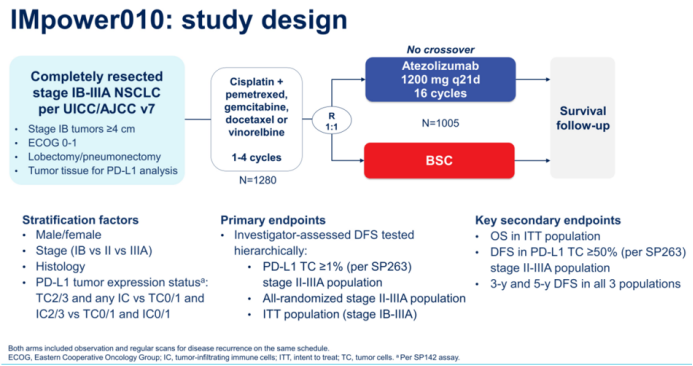 A total of 1280 patients were enrolled, and 1269 patients received 4 21-day cycles of cisplatin chemotherapy (combined with pemetrexed, docetaxel, gemcitabine or vinorelbine). Among these pts (n = 1269), 1005 patients were subsequently randomly assigned 1:1 to the group taking 1200 mg Q3W for 16 cycles or the BSC group.

The investigators performed a stratified test on the primary endpoint of DFS assessed and the secondary endpoint of overall survival (OS): first, DFS in the PD-L1 TC ≥ 1% (SP263) subgroup of stage II-IIIA disease, and then It is the DFS of all random pts of stage II-IIIA disease, then the DFS of the ITT population (stage IB-IIIA), and finally the OS of the ITT population. Efficacy evaluation is based on random pts.

The median dose of Atezo received by Pts in the Atezo group was 16 (range 1-16).

The incidence of adverse events leading to the discontinuation of Atezo was 18.2%. 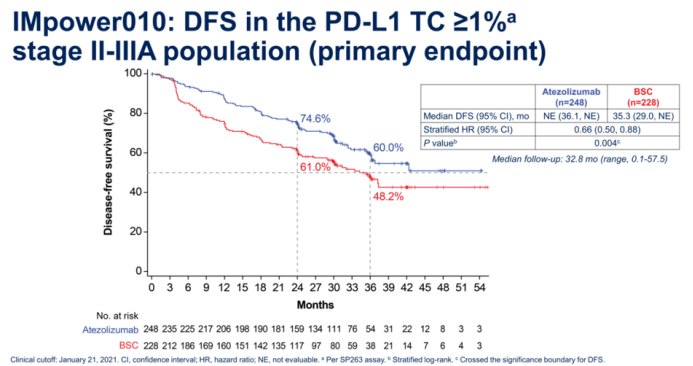 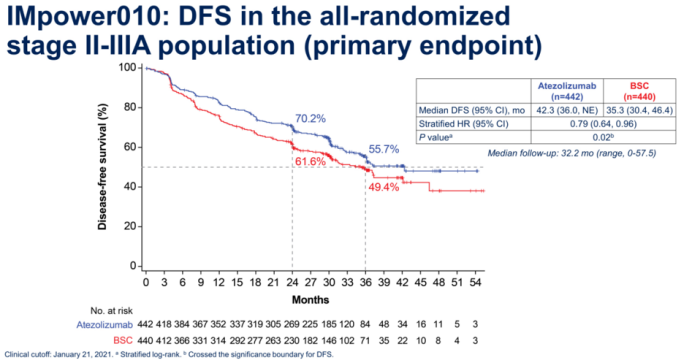 At a median follow-up time of 32.8 months, the median DFS in the Atezo group had not been reached, and the DFS in the BSC group was 35.3 months.

The safety data obtained in the test is consistent with the known safety characteristics of the drug, and no new safety signals have been found.

IMpower010 reached its primary endpoint, indicating that in the removal of stage II-IIIA NSCLC pts, the use of adjuvant Atezo and BSC after adjuvant chemotherapy is beneficial for DFS, and it has a clear benefit in the PD-L1 TC ≥ 1% subgroup.

Atezolizumab is a monoclonal antibody designed to bind to a protein called PD-L1 and block its interaction with PD-1 and B7.1 receptors. By inhibiting PD-L1, Atezolizumab can be reactivated T cells to kill tumor cells.