COVID-19 vaccine and China market boost AstraZeneca 2021H1 revenue by 23%.  In the future, AstraZeneca will continue to expand the indications and treatment options of existing products while it will actively promote many new drugs under development in the fields of tumor, CVRM, respiratory and immune, and rare diseases.

Overall, of the company’s 2021H1 total revenue year-on-year growth, about half of it comes from the sales of COVID-19 vaccines, and the other half comes from the year-on-year increase in sales of innovative drugs. Innovative drug products are divided into tumors, new CVRM (cardiovascular, renal and metabolic), respiratory and immune, and other drugs according to the field of treatment. Whether looking at the year-on-year growth rate or the proportion of total revenue, oncology and the new CVRM are both important drivers of growth.

Looking at the regional markets, emerging markets (emerging markets), including China, accounted for the highest proportion of total revenue, reaching 35%, surpassing the US market’s 31%. It is worth noting that although China’s market size is basically the same as that of Europe, its year-on-year growth rate is the lowest in the world, only 11%.

In contrast, emerging markets outside of China have the highest year-on-year growth rate in the world, reaching 36%. The world’s lowest growth in the Chinese market may be caused by two factors: (1) Drug bids or price cuts caused by mass procurement and medical insurance negotiations; (2) Chinese-made generic drugs and innovative drugs compete for market share. Even so, the scale and potential of the Chinese market still cannot be ignored, and the company can promote growth by accelerating the pace of listing of new drugs in China in the future.

For lung cancer treatment, sales of the third-generation EGFR inhibitor osimertinib (Tagrisso/Teresa) increased by 17% year-on-year to reach 2.5 billion US dollars. The drug can be used as adjuvant therapy, first-line therapy, and second-line therapy. It has been approved in 57, 91, and 91 countries, and reimbursed in 11, 46, and 67 countries, respectively. Ochinib’s sales have the lowest growth rate in emerging markets (10%), with the Chinese market experiencing even lower growth (4%).

In October 2018, osimertinib entered the national medical insurance through oncology drug negotiation. The indication is the second-line treatment of EGFR T790M mutation-positive NSCLC. Later, it was included in the first-line treatment during the medical insurance renewal negotiations in 2020. However, Hexion Pharmaceutical’s competition Pin Ametinib was included at the same time, and Iris’ vometinib was approved for marketing in March 2021. A variety of third-generation EGFR inhibitors competing on the same stage in the Chinese market led to slow sales growth of osimertinib.

Duvalimab (Imfinzi/Infinzi) is an anti-PD-L1 monoclonal antibody. The sales of 2021H1 increased by 18% year-on-year to US$1.2 billion. Among them, the growth of sales in emerging markets is as high as 99%, which is largely related to the previous small base. The drug’s indications include unresectable stage III NSCLC and extensive stage SCLC, which are approved for marketing in 74 and 57 countries, respectively, and can be reimbursed in 34 and 9 countries, respectively. The drug is one of four imported PD-(L)1 monoclonal antibodies approved in China, none of which has entered the national medical insurance. With the subsequent approval of other imported and domestic PD-(L)1 inhibitors, the prospects of duvalimab in China are not optimistic.

Figure 4. Global approval and sales of Teresa and Infineon (click to enlarge)

The PARP inhibitor olaparza (Lynparza/lipzol) was jointly developed by AstraZeneca and Merck, and its sales increased by 34% year-on-year in 2021H1, reaching US$1.1 billion. The drug’s indications include ovarian cancer, breast cancer, pancreatic cancer, and prostate cancer. It has been approved for marketing in 84, 82, 63, and 60 countries, respectively. The US market share accounted for 46%, an increase of 29% year-on-year, mainly driven by prostate cancer indications. The drug was included in the 2019 medical insurance negotiations for platinum-sensitive recurrent epithelial ovarian cancer, fallopian tube cancer or primary peritoneal cancer. The 2020 medical insurance negotiations also included maintenance treatment for these cancers. Zai Lab introduced niraparib (Ze Le®) from Tesaro to the 2020 National Medical Insurance Drug List, but only for maintenance treatment. Hengrui Medicine’s fluzoparib was approved for marketing in China in December 2020 and is expected to enter the 2021 version of the National Medical Insurance Drug List. 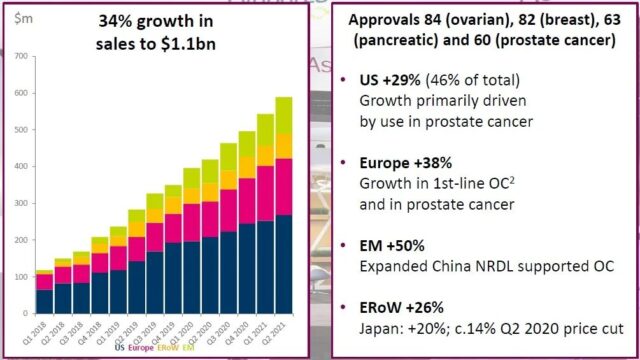 Acatinib (Calquence) is the second approved BTK inhibitor in the world, and it is also one of the five BTK inhibitors currently on the market in the world. The drug’s indications include chronic lymphocytic leukemia (CLL) and mantle cell lymphoma (MCL), which are approved in 66 and 32 countries, respectively, and can be reimbursed in 15 and 10 countries, respectively. Sales of the drug in 2021H1 increased by 150% year-on-year to 490 million U.S. dollars, of which sales in the US market reached 445 million U.S. dollars. Acatinib is currently undergoing a phase III clinical trial for CLL and MCL in China, but it will face the competition of ibrutinib, zebutinib and obetinib after approval in the future.

Enhertu is a well-known drug that promoted the second round of ADC research and development boom, involving AstraZeneca and Daiichi’s cooperation with a total value of 6.9 billion US dollars. The drug has been approved in the United States, Europe and Japan for the treatment of unresectable or metastatic HER2-positive breast cancer for third-line and above, and approved for second-line and above for the treatment of HER2-positive unresectable advanced or recurrent gastric cancer in the United States and Japan. AstraZeneca and Daiichi Sankyo will sell Enhertu separately. The former will have global sales of 89 million U.S. dollars in 2021H1, and the latter will have U.S. sales of 161 million U.S. dollars. The industry had predicted that Enhertu’s sales in 2024 would reach 2.5 billion U.S. dollars, and its peak sales would exceed 4 billion U.S. dollars. It seems that the drug’s global sales of approximately US$250 million in 2021H1 are still far from the above-mentioned expectations.

Chart 6. Global approval and sales of Akatinib and Enhertu (click to enlarge)

CVRM refers to cardiovascular, kidney and metabolism. In order to distinguish this field from traditional drugs with expired patents, the company calls this field the “new CVRM”. New drugs in this field include dapagliflozin (Farxiga/Andaton), ticagrelor (Brilinta/Belinda), Exenatide Microspheres (Bydureon/Baidayan), Roxadustat (Roxadustat), Zirconium cyclic sodium silicate (Lokelma/Libetro). Among these drugs, only dapagliflozin has a significant increase in sales in 2021H1.

Dapagliflozin (Farxiga/Andatang) is an SGLT2 inhibitor. This type of drug has been shown to have significant cardiovascular benefits in addition to treating type 2 diabetes. Dapagliflozin is approved in the United States and Europe for the treatment of heart failure with reduced ejection fraction (HFrEF), which makes it the fastest-growing SGLT2 inhibitor in the world, with a 53% year-on-year growth in 2021H1 and growth in emerging markets Achieved 77%.

Dapagliflozin suffered another four-point “soul bargaining” in the 2019 national medical insurance negotiations. In the end, 10mg/tablet was selected at 4.36 yuan and restricted to the second-line medication for type 2 diabetes. The agreement period is until the end of 2021, and it will participate in 2021. Negotiations for the renewal of the National Medical Insurance. It should be noted that the patent of another SGLT2 inhibitor, Enpagliflozin, in China has been invalidated. The generic drugs of Kelun Pharmaceutical, Hausen Pharmaceutical, Chia Tai Tianqing, and Jiangsu Wanbang have been issued in January 2021. Selected from four batches of national centralized procurement. In the indications of type 2 diabetes, dapagliflozin has to face the strong competition of empagliflozin. 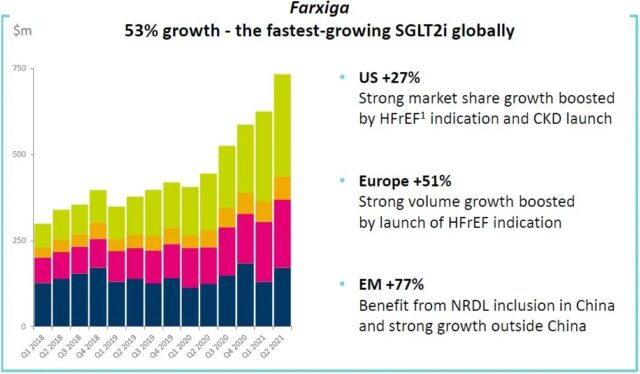 Completion of the acquisition of Alexion

Alexion is a well-known company focusing on the development of rare disease drugs. AstraZeneca made an acquisition offer in December 2020 and officially completed the acquisition on July 21, 2021. Brother Alex becomes AstraZeneca’s rare disease department, and its performance will be merged into AstraZeneca’s 2021 third quarter results. For AstraZeneca, this acquisition will accelerate the expansion of the field of immunity and rare diseases, bring more lasting, industry-leading double-digit revenue growth, and also improve profitability and strengthen cash flow.

Yalixiong’s performance is good. In the first half of 2021, total revenue increased by 15% year-on-year. Its main product, Soliris, had sales of US$2.099 billion. The drug was approved in China in 2018 for treatment Paroxysmal nocturnal hemoglobinuria (PNH) and atypical hemolytic uremic syndrome (aHUS) in adults and children. Ultomiris, a long-acting C5 complement inhibitor, has a substitution effect on Soliris, with sales of US$701 million, a year-on-year increase of 48%. Strensiq, which treats infantile and adolescent episodes of hypophosphatemia (HPP), and Kanuma, the first treatment for lysosomal acid lipase deficiency (LALD), also had double-digit growth.

Continue to develop the COVID-19 vaccine

AstraZeneca and the University of Oxford have jointly developed the chimpanzee adenovirus vector-based COVID-19 vaccine Vaxzevria (AZD1222). Its clinical trial was suspended because of the death of a patient, and the trial was resumed after the association was ruled out. The trial was resumed as early as December 29, 2020. U.K. approved for emergency use. As of June 2021, the vaccine is one of the seven vaccines on the WHO emergency use list, and the other six are from Pfizer/BioNTech, Johnson & Johnson, Moderna, India Serum Institute, Sinopharm Zhongsheng, and Kexing Biological . These seven vaccines can participate in the global vaccine sharing program COVAX.

The AstraZeneca/Oxford vaccine is 92% effective in preventing hospitalizations and deaths caused by the delta variant of the COVID-19 virus, and 82% is effective in preventing hospitalizations and deaths caused by the beta or gamma variants. It is still 1 year after the first injection. Shows immunity and has a strong response to the second dose. Through the Global Vaccine Sharing Program, Vaxzevria has been supplied to more than 125 countries, making it the most widely used COVID-19 vaccine in the world. By extending the supply chain, including the introduction of the Serum Institute of India in June 2021, Vaxzevria will supply more than 700 million doses to the world. AstraZeneca will deliver 319 million doses of vaccines in 2021H1, with revenue of 1.17 billion US dollars, of which 97 million doses will be delivered to the European Union.

In response to the recently circulating beta variant virus, AstraZeneca is developing an improved version of the vaccine AZD2816, which is based on the same adenovirus vector technology platform as AZD1222 and is expected to be used as a next-generation booster vaccine. In June 2021, the clinical phase II/III trial of AZD2816 will be enrolled to evaluate the safety and immunogenicity in previously vaccinated and unvaccinated adults. The results of the trial are expected to be read in the second half of the year.

Figure 9. Overview of the use and development of AstraZeneca’s COVID-19 vaccine

In the future, on the one hand, AstraZeneca will continue to expand the indications and treatment options of existing products, on the other hand, it will actively promote many new drugs under development in the fields of tumor, CVRM, respiratory and immune, and rare diseases.

The two-pronged approach will provide AstraZeneca with sustained growth momentum. The continuous deepening of China’s drug regulatory policy to international standards will help accelerate the entry of AstraZeneca’s new drugs into the Chinese market, release the huge potential of this world’s largest emerging market, and promote AstraZeneca’s performance to new highs.