Why is the tumor marker: TIL getting more and more popular?

Why is the tumor marker: TIL getting more and more popular?  The risk factors for breast cancer in the general population are mainly related to hormones. Given that its incidence in chronic immunosuppressed patients has not increased, it is traditionally believed that the growth and progression of this type of breast cancer will not be affected by the host’s “immune surveillance”. But over time, people noticed the phenomenon of “immune infiltration” in breast cancer samples.

However, until at least three different biological subtypes of breast cancer were observed, their clinical relevance was not clearly elucidated. Among the highly proliferative subtypes, usually triple-negative and HER2 overexpressing breast cancer, immune infiltration is the most common.

TIL (Tumor Infiltrating Lymphocytes) is a kind of infiltrating lymphocytes isolated from tumor tissues. Some of these lymphocytes are T cells that target tumor-specific mutant antigens. They are a group of immune cells that penetrate deep into the tumor to carry out immune attacks. They are considered to be a specific immune response of the body to tumor cells.

In solid tumors, the tumor microenvironment includes extracellular matrix and various cellular components, namely stromal cells, endothelial cells and immune cells. Some tumors are highly infiltrated by immune cells, while in other tumors, only minor infiltrations can be detected. The density, location and organization of these immune cells is called the “immune environment”.

Immune cells such as cytotoxic T cells, helper T cells, natural killer (NK) cells or dendritic cells (DC) contribute to the anti-tumor response, while other cells such as FOXP3 regulatory T cells (Treg) and bone marrow-derived Suppressor cell (MDSC) has the effect of promoting tumorigenesis, and promotes cancer growth and invasion by producing factors that maintain angiogenesis and promote the proliferation of cancer cells.

Consistent with its anti-tumor or tumor-promoting effects, immune cells have obvious prognostic significance. These observations confirm that immune cells in solid tumors can affect the behavior of cancer cells, and that the development of malignant diseases is to some extent the result of two-way crosstalk between cancer cells and their immune microenvironment.

Therefore, the characterization of the immune landscape and the quantification of tumor-infiltrating immune cells are used as surrogate indicators to evaluate the patient’s immune response and tumor immunogenicity.

The immune environment determined at the time of diagnosis reflects the immune response, and the increase in the number of immune cells is related to the clinical outcome of various malignant tumors (such as melanoma, colorectal cancer, lung cancer, and breast cancer). Breast cancer was not initially considered to be an immunogenic tumor, but evidence from preclinical and clinical studies has drawn people’s attention to the “immune environment” in breast cancer as a prognostic biomarker and target for immunotherapy. 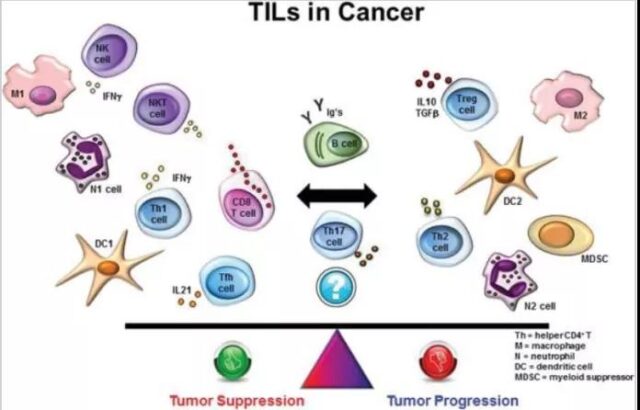 Figure 1 The dichotomy of the immune system

TILs have a variety of TCR clonality, superior tumor homing ability, and low targeted toxicity, giving them advantages in the treatment of solid tumors that other adoptive cell therapies cannot match. A variety of TIL therapies have shown their strong The tumor killing effect deserves widespread attention. This article mainly summarizes the role of TILs in clinical prediction.

The degree and distribution of TILs in the tumor and its microenvironment can be used as an important indicator to predict the ICI response. For example, patients with high T-cell infiltration of warm immune tumors benefit more, while tumor tissues and edges are not infiltrated by T cells. The clinical effect of tumor patients is poor.

1. The prognostic value and practicality of TIL in breast cancer patients with standard treatment

In 2014, researchers developed a method to quantify lymphocyte infiltration in breast cancer. This method uses standard hematoxylin and eosin (H&E) slides from diagnostic breast cancer samples, which is practical, straightforward, and easy to apply.

Biomarkers can be detected on archived formalin-fixed paraffin-embedded tissue (FFPE) using an optical microscope without additional staining. The advantages are huge. Using large data sets with long-term follow-up, especially data from randomized clinical trials, enables researchers to answer questions about prognosis and the interaction with chemotherapy and immune checkpoint suppression treatment effects. It is worth noting that the samples collected from patients participating in randomized clinical trials are of high value. Patients receiving controlled treatments can provide information about patients who have benefited from research treatments.

Data show that higher TILs have a strong prognostic correlation, especially in early TNBC patients receiving adjuvant chemotherapy. A review published recently in “Ann Oncol” pointed out that the prognostic effect and the logarithm of the risk of breast cancer events are linear: for every 10% increase in the number of TIL, after adjusting for other prognostic clinicopathological factors, the risk of aggressive recurrence or death, distant The risk of recurrence or death and the risk of death alone were significantly reduced by 13% (95% CI: 9% to 17%), 17% (95% CI: 12% to 22%), and 16% (95% CI, 11% to 21), respectively %). These data collected from 2148 patients provide strong evidence to support TIL as the first biological prognostic biomarker in the TNBC subtype, and significantly increase the prognostic information, which may guide clinicians to treat patients based on the level of TILs. Perform ups and downs. This review gives a reference for breast cancer TIL cut-off values. 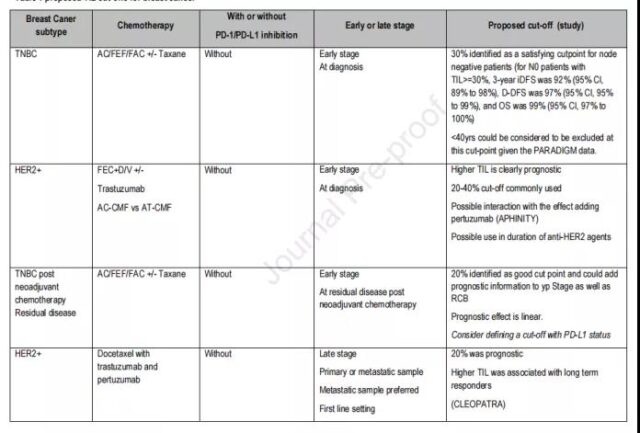 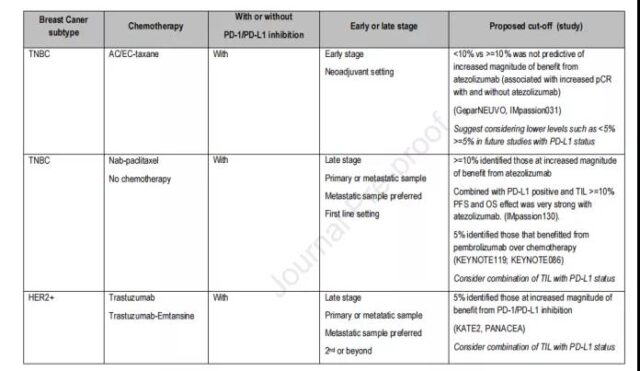 In 2019, Park et al. reported the results of phase 1 TNBC patients through a retrospective study and a randomized trial. All patients did not receive any adjuvant systemic chemotherapy. The 5-year DDFS of patients with high TIL (≥ 30% TIL) is 97% (93% to 100%), and the overall survival rate is 98% (95% to 100%). These data support the inclusion of TIL% in the early clinical trials of new TNBC therapies in the future, and as we enter the era of checkpoint inhibitors, it may have a higher correlation.

In early HER2-positive breast cancer, a positive correlation between high TIL and improved prognosis was observed in the use of trastuzumab-containing chemotherapy regimens and the use of trastuzumab and pertuzumab in early and late patients relation. In the ShortHER study, primary HER2-positive patients with high TIL (≥ 20%) had a relatively short duration of trastuzumab to exert clinical effects; in contrast, patients with low TIL only had a complete Good results can be obtained within a one-year duration. This data further supports TIL levels as a good prognostic marker and may help determine patients who are suitable for studying chemotherapy with less cytotoxicity or anti-HER2 therapy with a shorter duration. Prognostic studies of dual anti-HER2 targeted drugs and trastuzumab are also underway.

2. The prognostic and predictive value of TIL in the era of immune checkpoint suppression

Immune biomarkers (such as TIL) may play a role in the treatment of checkpoint suppression. In advanced breast cancer, the enrichment of PD-L1 expression on tumor immune cells seems to be a prerequisite for the benefit of atezolizumab and pembrolizumab in TNBC and HER2 + BC.

The study found that in PD-L1 + patients (defined as CPS ≥ 1% or more), TIL levels ≥ 5% further improved two single-arm phase II studies in previously treated advanced TNBC and HER2-positive BC patients In the identification of patients with a higher probability of responding to pembrolizumab.

In a subgroup analysis of a randomized study (KATE2) evaluating atezolizumab combined with TDM-1 treatment, higher TIL levels were also associated with PD-L1 positive and TIL higher than 5% groups with increased PFS and OS benefits, and The effect is similar in PD-L1 positive patients.

The phase III KEYNOTE-119 study randomly assigned patients who had previously received advanced TNBC treatment to receive a doctor’s choice of chemotherapy or pembrolizumab monotherapy. In this study, the PD-L1 status of patients was not considered when they were enrolled. Although the study did not show an OS benefit of pembrolizumab in the intent-to-treat population, in a post-hoc analysis, an increased benefit was observed in a subgroup analysis of patients with higher CPS PD-L1 scores. Consistent with this, compared with chemotherapy, patients with TIL ≥ 5% get a significant survival improvement from pembrolizumab, but in patients with lower TIL levels (< 5%), patients receiving chemotherapy have better survival. These data demonstrate for the first time the predictive power of TIL biomarkers themselves in patients with advanced TNBC.

The IMpassion130 phase III study evaluated the combination of atezolizumab and albumin-bound paclitaxel. In the study, the expression of TIL, CD8 and PD-L1 IHC detected by VentanaSP142 was moderately correlated. All immune markers can be determined more likely from the addition of atezolizumab. For the subgroup of women who benefited, the PD-L1 SP142 test appeared to be the “best” in this data set. Although the median TIL cut-off point was 5%, ≥ 10% was used in the exploratory subgroup analysis after the event. The higher the TIL, the greater the benefit of adding atezolizumab, but the most noteworthy is the effect of the combination of PD-L1 positive and TIL high biomarkers: these “immune-enriched” tumors seem to benefit the most.

In the context of neoadjuvant therapy, exploratory analysis also shows that immune variables (including PD-L1) are best evaluated in a continuous manner, as is the TIL recommendation, because both help predict the remission of patients with TNBC and HER2+ disease. Since the substrate for PD-L1 evaluation (regardless of the detection and evaluation method used) is the immune cells in the tumor, it is obvious that if there are no immune cells, the PD-L1 test cannot be positive. Similarly, when the patient’s tumor has a high TIL, it is less likely that the PD-L1 stain will be negative. 30-50% of early TNBC with high TIL and high PD-L1 expression will obtain pCR in classic chemotherapy-these immune biomarkers are positive prognostic factors.

3. The composition and exploration of TIL

In primary breast tumors, TIL is mainly composed of T cells. As the number of TIL increases, the proportion of CD8+ T cells relative to CD4+ also increases, indicating an enhanced cytotoxic T cell response. Can a better definition of specific T cell subpopulations better define who, besides PD-L1, benefits from T cell checkpoint suppression? Studies on the heterogeneity of CD8+ T cells have shown that other markers such as CD103 (ITGAE), CD39 (ENTPD1) and TCF1 may further distinguish specific tumor-reactive T cell populations. However, these seem to only exist on the T cell subsets observed in tumors. A large proportion of “bystander” T cells in tumors may be attracted by the release of cytokines and respond to other antigens such as viruses. It is reasonable that many T cells that are effective against tumor epitopes are inhibited by hostile microenvironment and/or tumor intrinsic factors. More research is still needed in this area.

In low- and middle-income countries, the high cost of PD-L1 testing will bring certain economic pressure to patients. The percentage of TILs that can be clinically interpreted using H&E stained slides can effectively alleviate the economic pressure of patients. A unified interpretation standard is conducive to the mutual recognition of results and deserves wider attention and application. In the field of oncology, biomarkers with clinical prediction and treatment guiding significance still need to be further explored and researched.