How T-DXd becomes a game changer in HER-2+ solid tumor treatment?

Trastuzumab deruxtecan (T-DXd) (DS-8201; ENHERTU®) is a new HER2 targeting ADC jointly developed by Daiichi Sankyo and AstraZeneca. T-DXd has shown significant anti-tumor activity in the treatment of refractory HER2+ metastatic breast cancer patients. Therefore, T-DXd was approved in 2019.

T-DXd has shown potential anti-tumor activity in several HER2-expressing solid tumors, including HER2-low-expressing breast cancer, HER2-positive gastric cancer, HER2-expressing colorectal cancer, and HER2-expressing or mutated NSCLC. At present, a number of clinical trials are underway to explore the activity of T-DXd in tumors that widely express HER2. The existing preliminary results show that T-DXd has the potential to change the treatment model of HER2+ tumors.

HER2 belongs to the four tyrosine kinases of the human epidermal growth factor receptor (HER) family, including EGFR (HER1, erbB1), HER2 (erbB2, HER2/neu), HER3 (erbB3) and HER4 (erbB4). These receptors regulate key cellular processes, including proliferation, movement, and survival. HER2 overexpression has a high transformation potential, and the amplification of the HER2 locus is an early event of breast cancer carcinogenesis.

T-DXd is an antibody-conjugated drug, consisting of anti-HER2 humanized monoclonal antibody (MAAL-9001) and Isartecan derivative MAAA-1181a (DXd). The partial amino acid sequence of the antibody is combined with trastuzumab. Similarly, DXd is a DNA topoisomerase I inhibitor. Compared with the active metabolite SN-38 of irinotecan, its inhibitory potency is 10 times higher.

After binding to HER2, T-DXd disrupts the HER2 signal and mediates antibody-dependent cytotoxicity. In addition, after binding, T-DXd undergoes endocytosis and is lysed in the cell, leading to the release of DXd, which in turn leads to DNA damage and cell apoptosis. 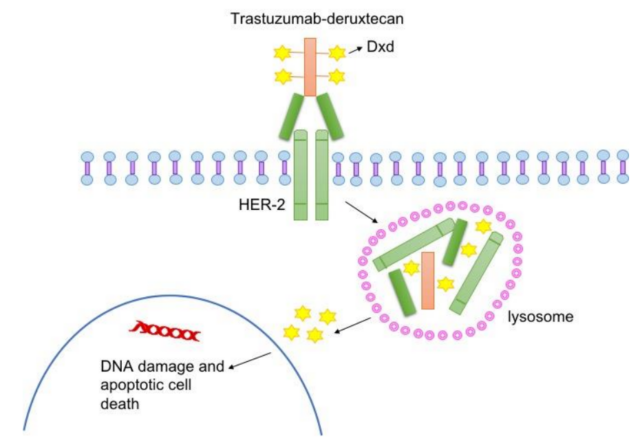 T-DXd is specially designed to improve the characteristics of other anti-HER2 ADCs. Trastuzumab can regulate the expression of topoisomerase I in extracellular vesicles released by HER2-positive cancer cells. The combination of topoisomerase inhibitor DXd and trastuzumab may have the potential to enhance anti-tumor effects effect.

Compared with TDM-1, T-DXd has a higher drug-to-antibody ratio (DAR, about 8:3-4), and is more effectively delivered to tumor cells expressing HER2. The half-life of its cytotoxic payload is short, thus increasing the cytotoxic effect, but minimizing systemic exposure and limiting off-target toxicity to normal cells. In addition, the payload has a high membrane permeability, which allows cytotoxic effects on tumor cells close to the target cell regardless of their HER2 expression level. This cytotoxic bystander effect has been confirmed in vitro and in vivo.

In a dose-escalation phase 1 clinical trial (NCT02564900), the safety, tolerability and efficacy of T-DXd in patients with advanced HER2-expressing breast and gastroesophageal junction tumors were evaluated. In the first part of this trial, 24 patients were included in the study and received T-DXd from 0.8 to 8.0 mg/kg every 3 weeks. In this small, refractory patient population, T-DXd shows good anti-tumor activity with a disease control rate (DCR) of 91%, even in tumors with low HER2 expression. 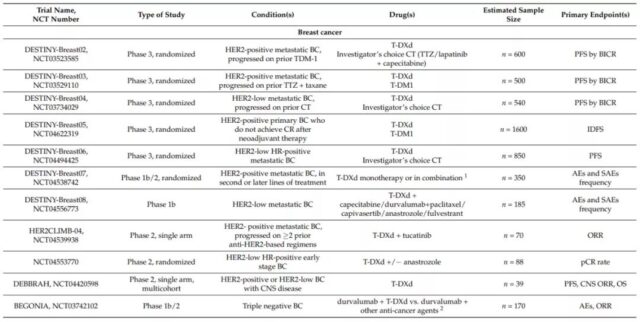 On January 15, 2021, the FDA approved T-DXd for the treatment of adult patients with locally advanced or metastatic HER2-positive gastric cancer or gastroesophageal junction adenocarcinoma. These patients have previously received trastuzumab-based Treatment programs. Currently, there are two phase 2 clinical trials in progress in HER2-positive gastric cancer patients, including the evaluation of T-DXd as monotherapy (DESTINY-Gastric02, NCT04014075) or combination chemotherapy and trastuzumab (DESTINY-Gastric03, NCT04379596) ).

The DESTINY-Lung01 (NCT03505710) phase II clinical trial evaluated T-DXd in non-squamous NSCLC patients with HER2 overexpression or HER2 activating mutations. Preliminary data from this trial confirmed that T-DXd has a high ORR and a durable response in patients with HER2 mutations (n=42). At a median follow-up time of 8.0 months, the ORR was 61.9%, the median DOR was not reached, and the DCR was 90.5%. The estimated median PFS was 14.0 months (95% CI, 6.4-14.0 months). It is worth noting that 45.2% of patients have central nervous system metastases.

At present, there are four phase 2 studies and one phase 1 study for HER2-positive or mutant NSCLC patients: DESTINY-Lung01 (NCT03505710) and DESTINY-Lung02 (NCT04644237) evaluating T-DXd monotherapy, DESTINY-Lung03 ( NCT04686305) and the HUDSON trial (NCT03334617) evaluate the combination of T-DXd with immunotherapy, chemotherapy, and new anticancer drugs.

Colorectal cancer and others

At present, there are still a number of clinical trials evaluating T-DXd monotherapy and combination therapy in different cancers.

9% of patients stopped treatment permanently due to SAEs, and most cases were ILD (6%). 33% and 18% of patients required dose interruption and dose reduction due to treatment-related toxicity. Fatal AEs occurred in 4.3% of patients. ILD was the most common cause (2.6%), followed by acute liver failure and acute kidney injury, deterioration of general health, pneumonia, and hemorrhagic shock (0.4% each).

With the emergence of T-DXd, HER2 may become an important therapeutic target for patients with NSCLC and colorectal cancer. Although T-DM1 has achieved good response rates in different studies, ranging from 20% to 50%, it is still low compared to the response rate observed with T-DXd (ORR 61.9%). Even in patients with HER2-positive colorectal cancer, single-agent T-DXd showed an ORR of more than 50%, while the ORR of trastuzumab combined with lapatinib or pertuzumab was only 30%. In general, preliminary evidence suggests that T-DXd is actively changing the treatment model for HER2-positive tumors.