Preclinical evaluation of TIL therapeutic potential in epithelial ovarian cancer

Preclinical evaluation of TIL therapeutic potential in epithelial ovarian cancer.

Epithelial ovarian cancer (EOC) has a poor prognosis after disease recurrence and resistance to platinum and Taxane chemotherapy.

The median overall survival for patients with stage III-IV disease is 29 to 38 months, depending on the relapse and platinum-free interval, and the 5-year relative overall survival rate is 17% to 36%.

For decades, attempts to improve overall survival through chemotherapy have had limited clinical success.

Therefore, alternative methods are currently being explored, such as immunotherapy.

Recently, the use of anti-PD-1/PD-L1 antibodies to block T cell checkpoints has been shown to induce clinical responses in 10-20% of severely pretreated EOC women, indicating that the mobilization of endogenous T cell pools is achieved through immunotherapy. There is potential in this disease.

Another immunotherapy that can be used to treat EOC is TIL therapy—a strategy in which patients receive large numbers of autologous, isolated, cultured tumor infiltrating lymphocytes (TIL).

As early as the early 1990s, although no follow-up trial data was published, clinical responses were observed in several EOC patients receiving TIL treatment. Importantly, the patients in these trials received extensively cultured T-cell therapy without prior chemotherapy for lymphocytic depletion.

In recent years, the knowledge system about TIL treatment has increased significantly, and our understanding of the requirements for clinically effective autologous T cell products has also increased.

In particular, clinical trial data for melanoma patients treated with TIL show a repeatable response rate of 50% and a long-term cure rate of 10-20%.

The increased effectiveness of this form of T cell therapy obtained in the past decade is believed to depend mainly on two factors:

Considering the lack of these two situations in EOC studies conducted in the 1990s, it seems reasonable to re-examine the TIL treatment of EOC patients.

In order to carry out such studies, we obtained materials from 6 patients with primary EOC, established T cell cultures according to the currently used GMP protocol, and evaluated the reactivity to autologous tumor cells.

Expansion of EOC TIL culture

Responsiveness of EOC TIL cultures to autologous tumors

Next, we assessed whether these EOC TIL cultures can recognize autologous tumor cells in a standardized co-culture assay.

Eight cultures established according to the clinical protocol for melanoma TIL production showed that the reactivity in the CD8+ T cell compartment was similar to EOC TIL (Figure 1F). 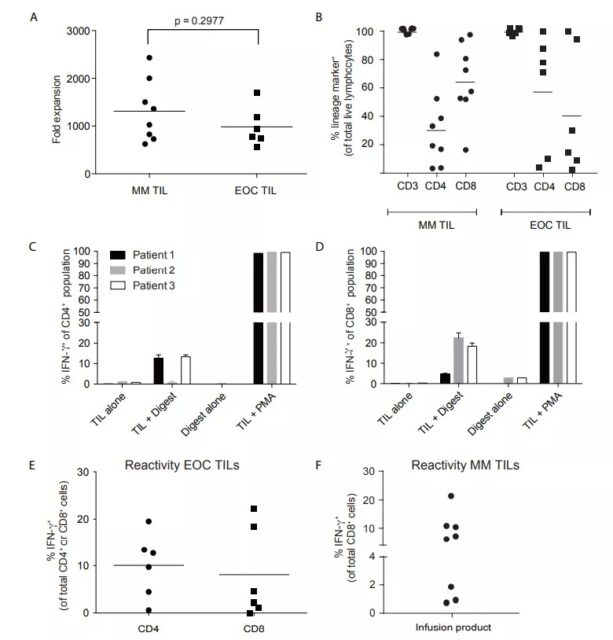 Figure 1. Analysis of EOC TIL culture.

Metastatic EOC has a poor prognosis, and there are few systemic treatment options for patients with chemotherapy-resistant diseases. Cancer immunotherapy may provide new clues for treatment, because in primary EOC, the presence of TIL is positively correlated with survival.

The early TIL trials in the 1990s demonstrated the potential clinical benefits in the treatment and prevention environment, but the treatment regimen has undergone major changes since then, which justifies the reanalysis of the potential of TIL to treat EOC.

Here, we show in six preclinical laboratory-scale expanded TIL cultures that there is tumor reactivity in the CD4+ and CD8+ T cell compartments. In several TIL trials, the presence of CD8+ T cells was found to be a predictive marker of treatment response.

In this regard, the bias against CD4+ T cells observed in EOC TIL cultures may cause some concern17,18 . However, recent data suggests that CD4+ tumor-reactive T cells also have a related role.

In particular, a case study showed that a patient with cholangiocarcinoma treated with a TIL product had a clinical response, which was highly enriched (>95%) of CD4+ T cells, which responded to MHC class II restricted neoantigens sex.

In addition, a study by our group showed that reactivity to neoantigens is usually observed in the CD4+ T cell compartment of melanoma patients (including those who respond to TIL treatment).

Therefore, the high frequency of CD4+ T cells in our EOC TIL culture may have clinical significance.

Our current approach has two considerations that need to be considered when planning a clinical trial.

Second, we observed tumor reactivity in TIL cultures from untreated patients with newly diagnosed EOC.

Whether these findings can be extrapolated to a metastatic environment where patients have received a lot of pretreatment still needs to be evaluated.

Nevertheless, the current data are encouraging in terms of the feasibility of establishing tumor-reactive TIL cultures in EOC.

Therefore, we plan to conduct phase I/II trials in 10 patients with III/IV EOC who have failed at least two lines of treatment.

These patients are expected to progress rapidly and have few treatment options.

The primary endpoints will be feasibility and safety and clinical efficacy. As far as we know, the other two centers are currently conducting similar trials (NCT01883297 and NCT02482090) with slightly different trial protocols.

The comprehensive data from these studies is expected to work synergistically, revealing the potential of TIL therapy in EOC patients.

Informed consent was obtained before the operation, and the research protocol (N12-INT for EOC TIL, N03-LAM for preclinical MM TIL and N10-TIL for clinical MM TIL) has been approved by the local medical ethics committee.

Enzymatic digestion of the tumor sample is performed to obtain a single cell suspension containing lymphocytes and tumor cells.

Start TIL culture with frozen and fresh single-cell digests. The cells were seeded at 1×10 6 cells/well in a 24-well plate in complete medium (RPMI, 10% human AB serum) and supplemented with IL-2 (6000IU/ml, Novartis). In the next few weeks, the TIL density was maintained at 0.5e5-075×105 cells/ml medium.

Finally, each TIL culture was subjected to a 14-day rapid expansion protocol (REP) in the presence of allogeneic irradiated feeder cells (Sanquin, Netherlands), anti-CD3, and IL-218.

After the REP is completed, the T cell culture is exposed to autologous tumor cells in a porous format at a ratio of 1:1. Add Brefeldin A and monensin to allow intracellular cytokine accumulation.

After overnight co-cultivation, the samples were fixed and permeabilized, and stained for IFN-γ (clone B27, BD Biosciences).

Preclinical evaluation of TIL therapeutic potential in epithelial ovarian cancer