According to NBC News on the 22nd, police found the remains of 17 COVID-19 patients in a nursing home in New Jersey, USA in 2020.

They were accused of inadequate epidemic prevention. However, this nursing home changed its name after the incident, and continues to operate, and is supported by government medical subsidies.

American woman Farrell said that she took a flight to this nursing home in New Jersey in December 2019 to visit her brother.

However, she found the environment there “disgusting”. “I told the caregivers to call the state government. I pay $9,000 a month, and I won’t even let my dog ​​live in this environment.” Since then, the COVID-19 epidemic has continued to spread.

Four months later, Farrell Called to ask about the situation of relatives in the nursing home, and was told that everything was fine, but a few days later, her brother passed away.

US media said that at the time of the initial outbreak of the COVID-19 epidemic, the New York and New Jersey nursing homes, including this nursing home, were “the first batch of outbreak.”

In the first four months after the outbreak, 83 of the 539 residents in the nursing home (almost 1 in 6) died of the COVID-19, including Farrell’s brother. A maintenance worker in the nursing home said, “The situation is terrible. Sometimes we have 10 to 12 people die every night.” 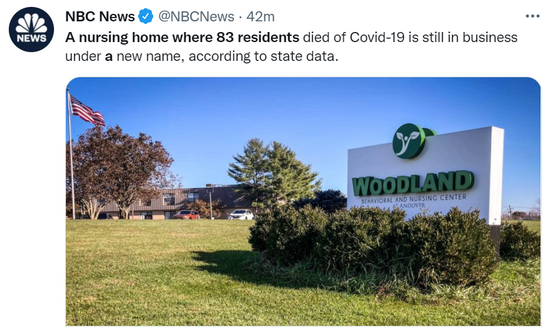 In April 2020, 17 bodies were found in this nursing home. In the past 19 months, the nursing home is still open.

David Grabowski, a professor of health care policy at Harvard Medical School, pointed out: “Different names, same practices. Nursing homes cannot simply put a new name on the building and continue to operate as it is.”

The family of the deceased in this nursing home Said that they are very sad, and some people are preparing to take nursing homes to court, claiming that they lack preparations to deal with the COVID-19, and they have mixed the COVID-19-infected people with healthy people.