Overseas Network, May 28. On the 26th local time, the Japanese Ministry of Health, Labour and Welfare announced that 57 people died after being vaccinated with Pfizer’s COVID-19 vaccine between May 3 and 21, and the cumulative death toll increased to 85.

The Ministry of Health, Labour and Welfare has assessed the death cases and stated that there is no need to worry too much about vaccination.

According to a report by Japan’s Yomiuri Shimbun on the 27th, 57 new deaths were reported in their 20s to 90s. The causes of death were mostly stroke and heart failure. More than 80% of the deaths were aged 65. Over the age of. Talking about the causal relationship between vaccination and death, the Ministry of Health, Labour and Welfare stated that 27 of the cases were “unassessable” and the other 30 were “under evaluation.”

The Ministry of Health, Labour and Welfare said that a female medical worker in her 60s with no underlying disease was vaccinated with Pfizer on February 26 and died three days later. The cause of death was subarachnoid hemorrhage, but it was impossible to determine whether her death was related to vaccination. 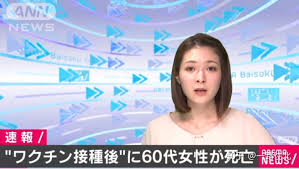 According to statistics from the Japan Broadcasting Association TV station, Japan added 888 new confirmed cases of COVID-19 on the 2nd, with a total of 434,304 confirmed cases; 65 new deaths and a total of 8013 deaths. Data show that the number of new cases in a single day in Japan was less than 1,000 on the second day for the third consecutive day. There were 232 new confirmed cases in Tokyo that day.

The average number of new cases in a single day was about 263 in the last 7 days. The state of emergency in Tokyo and the surrounding 3 counties was originally scheduled to expire on March 7. Prime Minister Yoshihide Suga said that he would listen to the opinions of the governors and experts before determining whether the state of emergency was lifted as scheduled.

Kyodo News reported on the 3rd that Tokyo and the surrounding 3 counties may request an extension of the state of emergency.

Japan launched the COVID-19 vaccination program on February 17, and the first batch will be vaccinated for 40,000 medical staff. As of the 2nd, a total of 34,772 people were vaccinated. There have been two reports of suspected side effects before.

The Ministry of Health, Labour and Welfare hopes to ensure that about 3.7 million other medical staff will be vaccinated against COVID-19 by mid-March, and about 36 million people over 65 years old will be vaccinated after April, followed by those with underlying diseases and ordinary people.