A 15-year-old boy died of heart failure only 2 days after receiving Pfizer vaccine.

A 15-year-old boy died only 2 days after receiving Pfizer vaccine.  In the United States, a “report” about Pfizer vaccine is causing people’s concern and concern.

According to Fox News, VAERS, a national vaccine adverse event reporting system jointly managed by the US Centers for Disease Control (CDC) and the US Food and Drug Administration (FDA), has recently received a report of a child’s death after being injected with Pfizer vaccine. 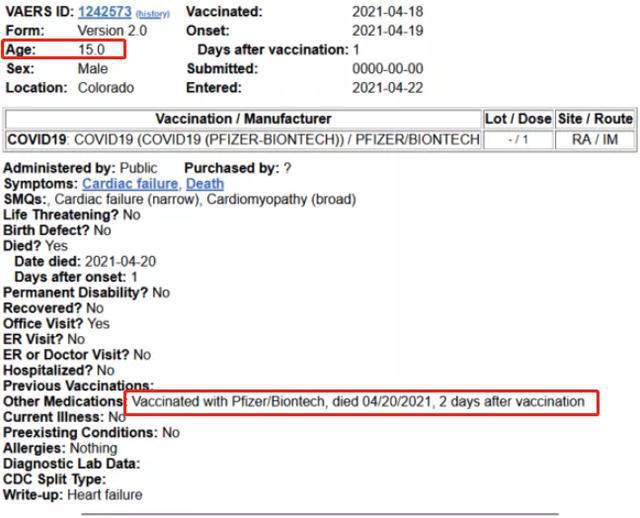 One of the reports showed that a 15-year-old boy from Colorado died of heart failure only 2 days after being vaccinated with Pfizer.

The report stated that the boy was healthy and had no history of underlying diseases or allergies.

He was vaccinated with Pfizer’s COVID-10 vaccine on April 18 and died of heart failure and cardiomyopathy on April 20. During this period, he did not even have time to see the emergency department or be hospitalized.

Currently, the United States only allows residents over the age of 16 to vaccinate Pfizer. It is unclear under what circumstances the 15-year-old boy was vaccinated.

What needs to be understood is that VAERS allows anyone to upload reports of adverse vaccine reactions without providing proof, but if the severity of the adverse reactions is listed as “serious” in the report, the CDC will follow up and obtain medical records.

Fox News contacted the CDC and the Colorado Department of Public Health. Both agencies said they were unable to provide additional information about the case.

It must be mentioned that the “cardiomyopathy” in this 15-year-old boy’s death report may be familiar to many people who are concerned about the news of the COVID-19 vaccine.

Just last month, the Israeli Ministry of Health just stated that they are studying cases of myocarditis after being vaccinated with Pfizer’s COVID-19 vaccine.

A study by the Israeli Ministry of Health showed that 62 of more than 5 million vaccinated people developed myocarditis, most of which occurred after the second dose, and 2 of them died.

The report shows that most cases of myocarditis occur in men under 30 years of age.

Two patients who died of myocarditis after being vaccinated with Pfizer were a 22-year-old female and a 35-year-old male.

The report also showed that this response to myocarditis has been submitted to Pfizer, and Pfizer’s response is that they have no similar reports elsewhere in the world.

At the same time, the report has also been sent to the US CDC and FDA, and the CDC and FDA are also under investigation.

The author of this report, a senior official from the Israeli Ministry of Health, and the head of the local hospital’s COVID-19 department, Dr. Meorach speculated: “One reason for the lack of similar reports in other countries may be that the vaccination rate among local young people is still very low.”

Although the report has not established a direct link between Pfizer vaccine and myocarditis, the authors pointed out that the frequency of myocarditis in men under 30 years old within a few days of receiving the second dose of Pfizer is “extraordinarily worrying.”

The report warns in particular: “It must be noted that we may see the same results during the vaccination process between 12 and 15 years old.”

In any case, people hope that the US CDC and FDA can make an official statement on the report of the death of a 15-year-old boy and the Israeli study as soon as possible. If it has nothing to do with the vaccine, it will let everyone relax.

A 15-year-old boy died of heart failure only 2 days after receiving Pfizer vaccine.