90 Canadian seniors still infected and 10 died even full COVID-19 vaccinated. According CBC news on Oct 15,  One of COVID-19 most significant outbreak occurred in Willingdon Care center in BC Canada.

10 deaths due to outbreak in Burnaby nursing home

The ongoing COVID-19 outbreak at the Willingdon Long-Term Care Home near Metrotown in Burnaby was called a “tragedy” by the head of the BC Care Providers Association because the introduction of the booster needle was too slow across the province, causing the number of cases to continue to increase. . 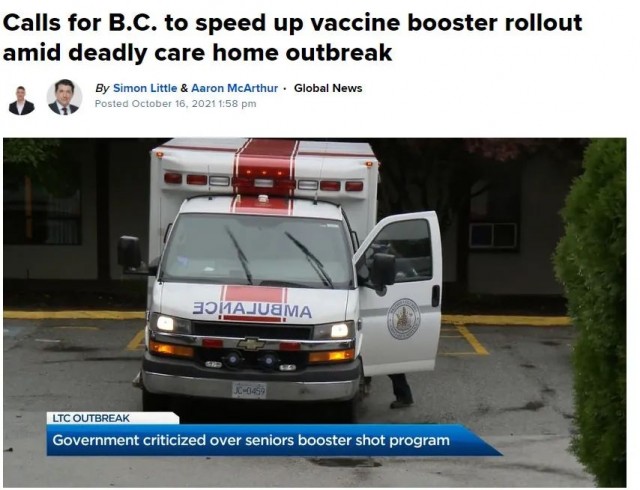 As of October 15 , Burnaby’s Willingdon Care Centre had more than 100 infections and 10 residents had died in the epidemic. 78 of these cases were residents living in the center, accounting for 82% of the elderly living in the facility.

“This is a heartbreaking situation, and if the booster needle is rolled out sooner, I think it might be avoidable,” said Terry Lake, CEO of the BC Care Providers Association. 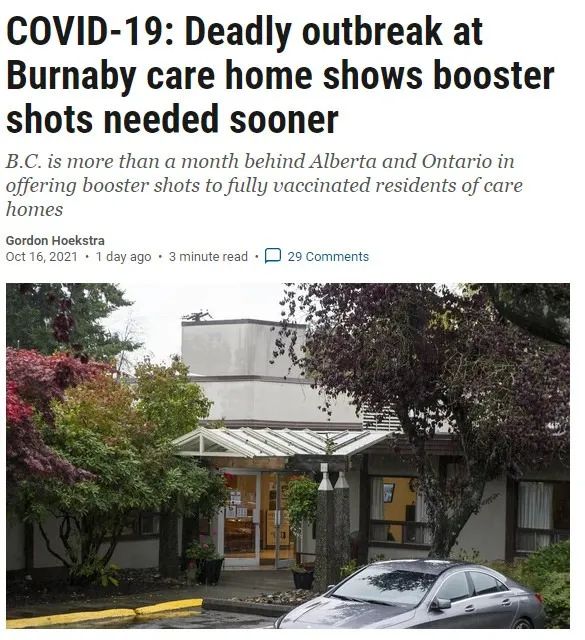 According to The Sun, so far, the British Columbia government has reported 10 deaths in the 95-bed Willingdon Nursing Center. Twelve people died. 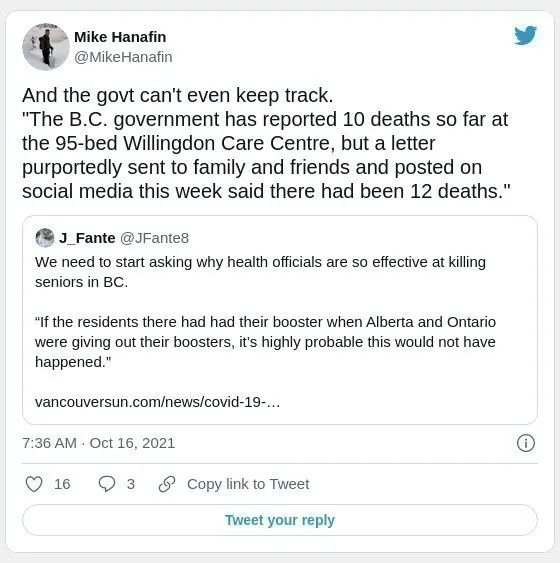 The letter stated that as many as 82 residents and 30 employees have tested positive for COVID-19. As of Friday, Fraser Health’s official figures were 78 among residents and 22 among staff.

Studies have shown that the third booster is now seen as an important protection for extremely vulnerable people who have a weaker immune response to the vaccine.

British Columbia is more than a month behind Alberta and Ontario in providing booster injections for residents of nursing homes who are fully vaccinated.

In Alberta, the third booster shot started in a nursing home on September 1, which is one month before British Columbia’s decision.

The National Vaccination Advisory Committee (NACI) officially recommended booster injections to residents of long-term care institutions and people with severe immune function on September 28. BC’s own promotion plan has been carried out for about two weeks.

So far, BC has distributed about 42,000 third doses, but only a small percentage of them are for people living in long-term care homes, mainly in the Lower Mainland.

B.C.’s chief health officer, Bonnie Henry, defended this week by saying that the province is relying on global data on the effectiveness of vaccines waning approximately six months after vaccination, and following NACI guidelines.

But Lake pointed out that B.C. does not always wait for NACI’s guidance. When the decision to postpone the second dose of vaccine this spring, B.C. took action before NACI issued the guidance, and the booster plan has already been counted in the provinces of Alberta and Ontario. The booster injection was started a week ago.

He said that the current progress in BC will require elderly people to wait until mid-November before receiving the third dose, which is 10 months after the second dose.

“We know it is too late and unless we speed up, we will see more outbreaks and more deaths,” Lake said.

Lake said that he knew that this week the Fraser Health Department had begun to introduce booster injections, and on Thursday, residents of the Wellingdon Care Center received their third injection.

The Liberal Party of BC is also calling for speeding up the third dose of action. Interim leader Shirley Bond said that the province also ignored other protective measures to protect hospitalized nursing staff.

“The concern we have heard is that progress in other jurisdictions is much faster than in our province,” she said.

Although BC has managed to keep the daily new COVID-19 cases stable in the past month, the number of deaths has risen sharply in recent weeks.

Although BC has not released the latest data on the number of deaths by age, as of October 2, the vast majority of deaths are still people over 70 years old.

With the weakening of vaccine immunity and about 30% of new cases in the dual vaccinated population, this means that hundreds of thousands of elderly people living in the community may also face a higher risk.

It is expected that BC will provide detailed information on boosters for the elderly in nursing homes next week.