In fact, in late July, some people started research on the MU variant. The Miami laboratory looked through the samples of COVID-19 they had sequenced before and found that 10% of the cases were MU variants last month.

They were infected with B.1.621, which was later renamed MU. 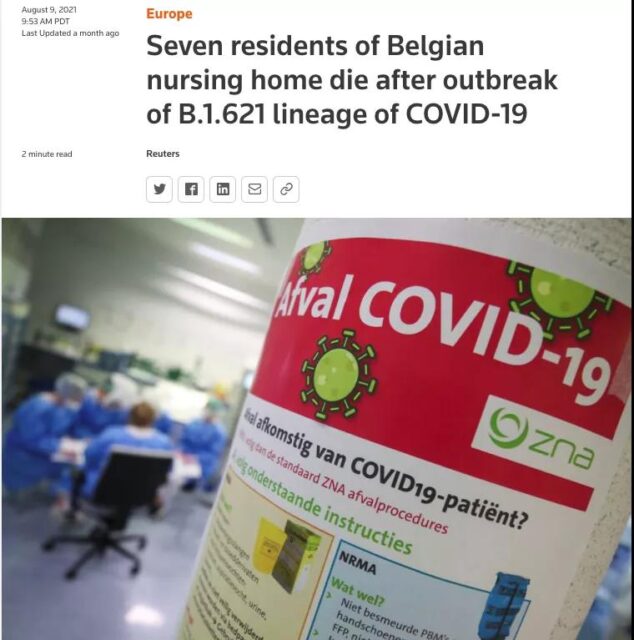 On August 6, MU had not been officially named, nor was it listed as a variant of concern.

At that time, the COVID-19 epidemic broke out in a nursing home in a small town in Belgium. All the elderly had been vaccinated. People thought they could successfully avoid hospitalization or death.

However, this wave of viruses is coming so fiercely that people feel very wrong.

It was too late to react. Seven fully vaccinated residents in their 80s died of COVID-19 one after another. At that time, scientists only found out that the virus sequence in their bodies was B.1.621, and did not know whether this variant was easier to spread.

At that time, the popular variant in Belgium was Delta, which accounted for 95%, followed by Alpha, and Kappa, which had just raised its head.

Therefore, the seven fully vaccinated dead were classified as Kappa (B.1.617.1) variants with similar sequences. They did not expect that a new deadly variant of horror would spread quietly.

MU has the P681H mutation, which is similar to the Alpha variant and is responsible for faster spread.

MU also has E484K and K417N mutations, similar to Beta, which can invalidate certain antibodies!

This is a mutation that humans have not seen so far, so it is not known what kind of function it has.

Scientists all over the world move very quickly at this time.

A Roman laboratory successfully extracted the MU virus from a traveler. At the same time, they extracted antibody-containing serum from 37 people who had been vaccinated by Pfizer.

Pfizer antibody serum vs MU virus, the result is worrying.

They found that the antibodies produced by Pfizer vaccine were not as effective as other variants on MU variants.

Although the Pfizer vaccine still protects MU, it is not yet known whether MU will aggravate the disease or mortality.

The emergence of MU makes more people alert, more and more variants, stronger and stronger. This is like a gamble. The COVID-19 virus is constantly throwing dice, and the next variant that may appear is the big boss.