7 died in Belgium: Much more powerful COVID-19 variant is coming?

7 died in Belgium: Much more powerful COVID-19 variant is coming? 21 people were infected with the new mutant and 7 people died. Will the new coronavirus become stronger?

Delta hasn’t settled yet, yet another “virulence and immune escape” mutant strain has arrived.

According to Reuters, a cluster of infections broke out in a nursing home in Belgium. All its households and staff have completed the full dose vaccination. But as of August 9, the agency has confirmed a total of 21 people infected, of which 7 people died.

Virologist Mark Van Lanster of Ku Leuven University in Belgium said that this may have something to do with the infected person themselves. “The people who died from the epidemic were all 80 or 90-year-olds, and some of them had poor basic conditions.”

“Another worrying issue is that the sequencing of the viral genome showed that the nursing home was invaded by the mutant strain B.1.621.” Mark Van Lanster explained.

The World Health Organization (WHO) has stated that B.1.621 needs “further monitoring”, but it has not been named after the Greek letter, nor has it been classified as “Variants to be Observed (VOI)” and “Variants requiring attention (VOC)”. This shows that it has not caused a surge in local or multinational cases; there is no evidence to support it, and it has significantly reduced the effectiveness of vaccines and other preventive measures.

However, “Forbes” magazine analyzed that B.1.621 may be upgraded to VOI in the near future, and may even be included in the more threatening VOC. The mutant strain Delta belongs to VOC.

“At the time of writing, Delta is the main epidemic strain in the UK, with a detection rate of over 99% in some areas, and other strains have almost no room for transmission. However, B.1.621 is spreading in the community. This shows that it has adaptive advantages and Certain immune escape potential.” On August 13, “The Lancet-Infectious Diseases” magazine published a British study saying.

The mutant strain B.1.621 first appeared in Colombia in January this year.

The pre-printed platform medRxiv recently published a study showing that the mutant strain has multiple mutations in the spike protein, including E484K, N501Y, and D614G mutations that are widely present in VOC mutant strains.

Studies have shown that the E484K variant can reduce the activity of neutralizing antibodies. In other words, whether it is a vaccine or an antibody produced by a natural infection, B.1.621 may have a way to avoid it. The scientific name is “immune escape.”

N501Y enhances the affinity of the viral spike protein with human cell receptors, which makes it easier for the virus to enter cells. Data supports that this mutation will increase the infectivity of the virus by 70%.

The strain carrying the D614G mutation first appeared in the spring of 2020, and has since soared all the way to become a major global epidemic strain, which has multiplied generation after generation. In February 2021, “Nature” published a document stating that on the one hand, the D614G mutation will enhance the ability of the virus to bind, making it easier to attach to human cells. On the other hand, the mouse model confirmed that its replication speed was accelerated. The two effects are superimposed, and the D614G mutant strain has a stronger and more effective transmission power.

In addition, B.1.621 also has some “strong-strong alliances” mutations. For example, the mutation of P681H will assist D614G and increase the transmission power; mutation of P323L and NSP6, or enhance the efficiency of virus replication; and the mutation of C241U, which has a “function” similar to N501Y, and may also strengthen the binding force between the virus and human cells.

“A careful analysis of the B.1.621 mutation will reveal that it is very worthy of close observation.” According to the analysis of Forbes, it may become another immune escape and infectious “double high” strain after Delta.

Will the new strain be more powerful than Delta?

“Forbes” compiled data from WHO and the Global Influenza Data Sharing Initiative (GISAID), saying that 30 countries and regions around the world have notified B.1.621-related cases.

The UK is an important transit point for this strain. Some countries reported “imported” cases in the UK in June and July, and the number is increasing. As of the second week of July, the B.1.621 detection rate at the Jackson Memorial Hospital in Miami, Florida, has reached 9%. The B.1.621.1 of the same pedigree was first reported in April this year and has now spread to 20 countries and regions around the world.

In early August, Europe listed B.1.621 as a key focus. Subsequently, the Public Health Agency of England (PHE) issued a “risk assessment report”, listing several sets of data of B.1.621 in a laboratory environment. The result is not optimistic:

First, compared with the original strain and the VOC mutant Alpha, the serum of the vaccinee was more obvious “immune escape” to B.1.621.

Second, the serum of recovered patients who have recently been infected with the delta variant strain has no strong neutralizing effect on B.1.621.

Third, people who have been vaccinated and infected with delta variants have a high level of neutralization ability against all tested variants (including B.1.621) in their serum.

PHE also uses the alpha of the VOC variant strain as the base to compare the spreading power of different strains. The results showed that B.1.621 left other strains behind, and its virulence might be second only to Delta. 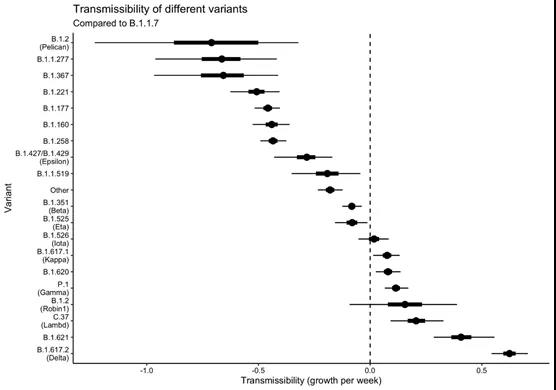 PHE stated in the risk assessment that research on B.1.621 is still relatively limited. Whether it will cause more serious diseases, whether it will invalidate the vaccine, be “stronger” than delta, and cause a new wave of peaks, these questions need to be further studied and answered.

“Forbes” reminded “the need to pay attention to cluster infections in nursing homes in Belgium”. “All 21 infected people were vaccinated. At first glance, the breakthrough infection rate of B.1.621 seems to be more deadly.”