More dangerous COVID-19 variant: Lambda has widely spread.  The most dangerous mutant strain Lambda appeared? Infectiousness and immune resistance have been strengthened at the same time, and it has been widely spread in dozens of countries

Since its first outbreak at the end of 2019, the new coronavirus (SARS-CoV-2) is still raging around the world. As of August 3, 2021, it has infected more than 200 million people worldwide and killed more than 4.25 million.

With the large-scale epidemic of the new coronavirus, new virus mutant strains continue to appear, Alpha, Beta, Gamma, Delta, etc., some of which have stronger infection ability or stronger immune escape ability, so they have been approved by the World Health Organization ( WHO) is listed as a key concern.

The most concerned about the world at present is undoubtedly the Delta mutant strain. Since the Delta mutant strain was discovered in India at the end of last year, it has rapidly swept the world and became the main epidemic strain in most parts of the world. And many studies have shown that its infectious ability has greatly increased, and the protective effect of vaccines has also been significantly reduced.

However, recently, a new mutant strain, Lambda mutant strain, first discovered in Peru, South America, has begun to attract attention, and the World Health Organization (WHO) has listed it as a mutant strain to be seen (VOI).

Chile has a high vaccination rate. About 60% of the population has received at least one dose of the COVID-19 vaccine. However, since the spring of 2021, the number of COVID-19 infections in Chile has increased rapidly, mainly due to the infection of the Lambda mutant strain. Therefore, the researchers believe The mutant strain can evade the immune response induced by the vaccine.

On July 28, 2021, researchers from the University of Tokyo published a paper titled: SARS-CoV-2 Lambda variant exhibits higher infectivity and immune resistance in the preprint bioRxiv. The study used molecular phylogenetic analysis to reveal the Lambda mutant strain. Evolutionary characteristics, and pointed out that the Lambda mutant strain has stronger infectiousness and immune resistance. 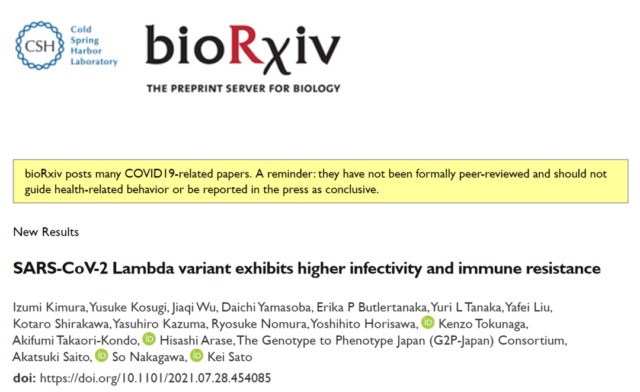 In this study, the researchers found that the RSYLTPGD246-253N mutation inserted in the N-terminal domain (NTD) of the S protein of the Lambda mutant strain is associated with increased virus virulence. This mutation is responsible for the rapid spread of Lambda mutant strains in South American countries. 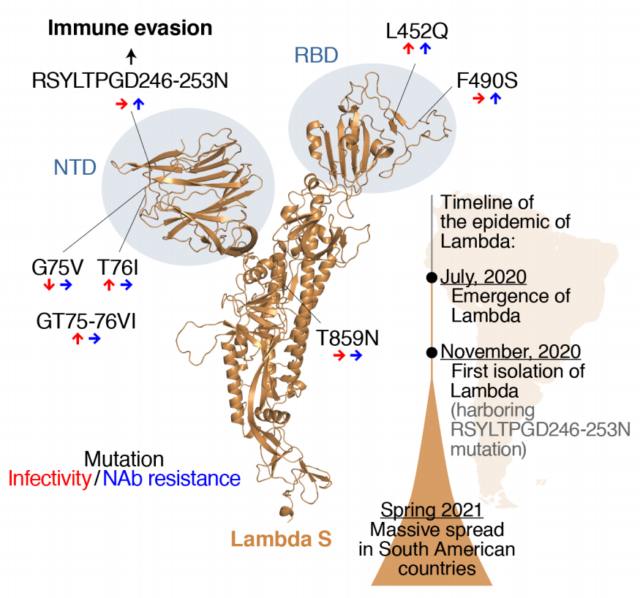 The RSYLTPGD246-253N mutation overlaps with a component of the “supersite” of the N-terminal domain (NTD), indicating that this is its immunodominant site. Therefore, the mutation at this site allows the Lambda mutant strain to escape the immune response triggered by the COVID-19 vaccine. 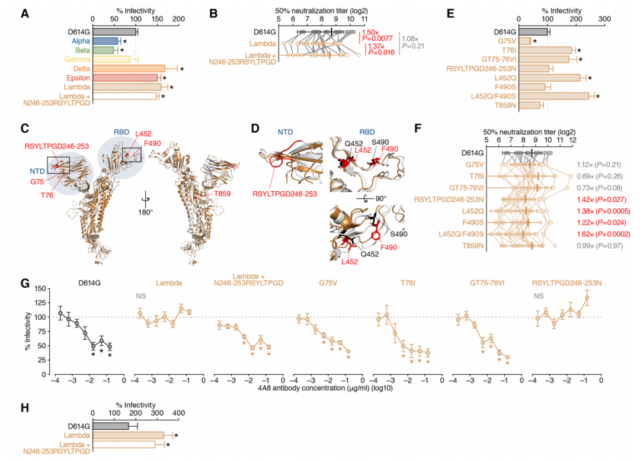 Therefore, in order to achieve large-scale infection, it must have two characteristics: increased infectivity and increased immune escape ability. And this study shows that the Lambda mutant strain possesses these two abilities.

This study clarified the evolutionary trend of Lambda mutant strains through molecular phylogenetic analysis and virological experiments. Although the WHO currently only classifies it as a mutant strain under observation (VOI), the author of the paper emphasized that the Lambda mutant strain has a strong potential to trigger a new large-scale epidemic in the future and should be prepared for it.