BBC host died after being vaccinated with AstraZeneca COVID-19 vaccine

BBC host died after being vaccinated with AstraZeneca COVID-19 vaccine.

According to a report by “Central News Agency” on August 28th,  Lisa Shaw, the female host of BBC Radio Newcastle (BBC Radio Newcastle), suffered from cerebral hemorrhage after receiving the first dose of AstraZeneca’s COVID-19 vaccine and died.  The coroner confirmed that she died of a rare vaccine complication. 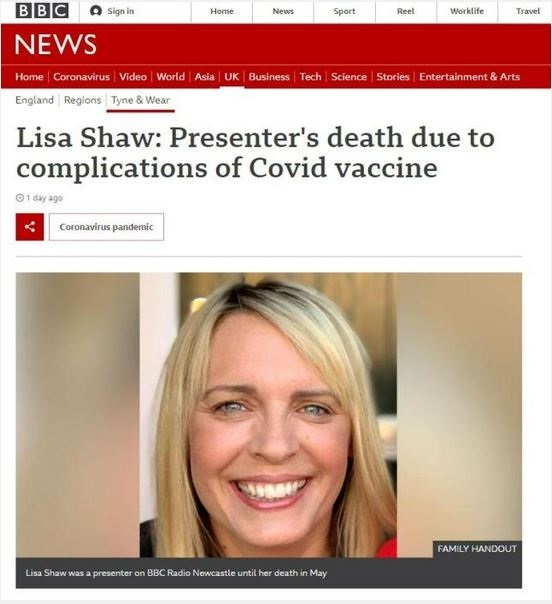 According to reports, after receiving the first dose of AstraZeneca vaccine on April 29, the hostess Lisa Shaw was sent to the hospital on May 13 due to a severe headache. The test results showed a blood clot in the brain. A few days later, Lisa Xiao’s headache symptoms worsened and she had difficulty speaking. The scan showed brain hemorrhage. In order to relieve the pressure on her head, doctors removed part of her skull, but she was still unable to recover. Xiao Ao died of illness on May 21 .

Newcastle coroner Karen Dilks confirmed that Lisa Shaw died of a very rare “vaccine-induced thrombotic thrombocytopenia,” a condition that causes swelling and bleeding in the brain.

Neuropathologist Tuomo Polvikoski examined Lisa Shaw after her death. He stated that given Lisa Shaw’s good health and no medical problems, she died of blood clots and cerebral hemorrhage, which was “a cause for concern. surprise”.

Concerns about rare blood clots after the vaccine has been administered have prompted some countries to stop or restrict the administration of the AstraZeneca vaccine. The United Kingdom currently recommends that healthy people under the age of 40 be vaccinated with other brands of vaccines. After administering the first dose of 24.8 million and the second dose of 23.9 million of AstraZeneca vaccines across the UK, 417 cases of thrombosis and 72 deaths were reported.

A study published in the British Medical Journal (BMJ) found that shortly after the first dose of AstraZeneca and Pfizer vaccines, there was a slight increase in the risk of blood clots that could lead to hospitalization or death. The study pointed out that for every 10 million people vaccinated with AstraZeneca, scientists estimate that 66 venous thrombosis (VTE) cases will increase.

The first author of the research report and Professor of Clinical Epidemiology at the University of Oxford, Julia Hippisley-Cox said that Lisa Shaw’s death was “very regrettable”, but “those are extremely rare cases.” These vaccines are absolutely no problem for most people.”