“At least in Singapore, we are confident that we can start to return to normal without suffering the same huge impact as other countries at the epicenter of the epidemic.”

On November 29, Singapore, Woodland temporary bus interchange. Both Singapore and Malaysia completed the vaccinated land passage and the previously announced air passage started at the same time on the 29th.

On December 9, Singapore’s first local case of Omicron strain was reported. A 24-year-old worker in the airport transit area was diagnosed during regular tests and was an asymptomatic infected person.

Just two days ago, the Singaporean government just stopped issuing epidemic notices every night. The reason given by the Ministry of Health is that “this wave of delta virus epidemic is slowing down.”

However, the epidemic data will still be updated online every night. According to Singapore’s “ Oriental Daily News ”, on December 7, 715 new confirmed cases were confirmed in Singapore, and the number of newly confirmed cases in a single day remained at three digits for 5 consecutive days.

The weekly infection growth rate dropped from 0.64 the previous day to 0.63, 25 consecutively. The day is below 1.

Since August 10, Singapore began to implement the “coexistence with the COVID-19” policy.

According to data from the Ministry of Health, 54 new confirmed cases were recorded that day.

However, since mid-to-late August, the number of new cases has risen sharply, from a double-digit daily increase in early August to a four-digit single-day increase.

The peak of this wave was reached on October 27, with 5,324 new cases added in a single day.

At the beginning of 2020, many countries were deeply mired in the epidemic.

The positive prevention strategy of Singapore , which is located in the tropics and has a total population of 5.686 million, surprised the world. The WHO twice praised it as a “epidemic prevention model”.

At that time, Singapore adopted a fast and flexible customs policy externally to eliminate imported cases, internally used police to track and treat cases, and carpet-like search and close contact, which effectively contained the epidemic within one month.

Four months ago, Singapore announced its “coexistence with the COVID-19.”

After the former “model student” changed the epidemic prevention strategy, the epidemic was almost lost. After a three-month surge, the epidemic has now eased again, and the dawn seems to be right before our eyes.

After the ups and downs, has Singapore found the right way to fight the epidemic?

In the face of the new variant Omicron that may replace Delta, how will Singapore’s epidemic prevention policies be affected? 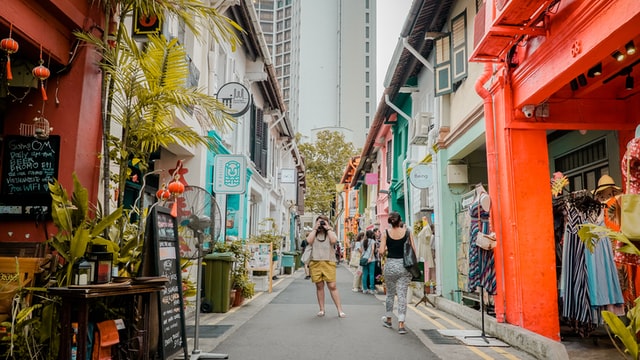 At 7:30 in the morning on November 29, a short-distance bus with 5 passengers departed from Johor Bahru Malaysia Bus Terminal to Singapore.

This marks the official opening of the Land Vaccination Tourist Corridor (VTL) between Malaysia and Singapore.

As the only country with land access to Singapore, Malaysia is Singapore’s main source of fresh vegetables and meat. The people-to-people ties between the two countries are close, with more than 300,000 people moving across the border by land every day.

The opening of VTL is obviously an important step to restore bilateral and regional connections.

According to Malaysia’s Sin Chew Daily , according to the VTL program, people who have completed vaccination can travel between Malaysia’s Kuala Lumpur Airport and Singapore’s Changi Airport without quarantine.

They will no longer be quarantined at home or at home, but they still need to be tested for the virus.

The VTL program is not limited to Malaysia.

At present, the plan has covered more than 20 countries around the world, including Cambodia, Fiji, Maldives, Sri Lanka, Thailand and Turkey.

Alex R COOK, an associate professor at the Suriford School of Public Health at the National University of Singapore, told Jiemian News, “As an open small economy, Singapore needs to open its borders to allow people and trade to flow. This is no longer a “zero-clearing” policy. One of the reasons it applies to Singapore.”

In fact, Singapore’s attempt to “open the country” can be traced back to the first half of this year.

After the nucleic acid test, you need to take a taxi to a hotel with isolation facilities. Once the test result comes out and proves to be negative, you can move around freely.

“But when you enter the mall, you also need to scan the QR code, which is similar to checking the health treasure when entering the mall in Beijing. However, their focus is on whether they are vaccinated and whether it is a close connection.”

The high coverage of vaccines among the people is one of Singapore’s “assuming” to keep the country open.

According to data from the Ministry of Health of Singapore, as of December 8, the proportion of people in Singapore who had completed vaccination remained at 87%.

Gu Alie of the National University of Singapore revealed to Jiemian News: “The first wave of large infections in the general community has gradually decreased. This is probably because about 40% of the population has been infected or vaccinated with booster shots.

Among people over 12 years old. Only 4% of people have not been vaccinated, so we already have a broad base of protection to prevent serious cases.”

And so far, the low fatality rate seems to be one of the reasons for optimism. “In Singapore, only 0.2% of people who have been infected recently died.

Taking into account the possible undetected cases, the true death rate of infection will definitely be lower.” Guarlie said.

However, Omicron, who has not fully lifted the veil, brings uncertainty to the world. On November 24, Omicron was first discovered in South Africa.

Up to now, 57 countries around the world have reported the discovery of Omicron mutants.

On December 8, local time, World Health Organization Director-General Tedros Adhanom Ghebreyesus said that some preliminary evidence from South Africa showed that the disease caused by the Omicron variant was lighter than that caused by the Delta variant, but it is still unclear if the conclusion is made now. It’s too early.

However, many countries have introduced targeted measures. The Singapore government has also tightened anti-epidemic measures.

On November 30, Minister of Health Wang Yikang stated at a press conference that in order to prevent the infiltration of Omicron strain, he decided to suspend the expansion of the VTL plan.

The original VTL program with Qatar, Saudi Arabia and the UAE was delayed on December 6th. The specific start time is unknown.

Passengers entering Singapore from China are also required to add a nucleic acid test before departure. According to the Ministry of Health of Singapore, from 23:59 on December 2nd, all incoming air passengers must be tested for the COVID-19 virus within 2 days before departure, and the result will be negative before they can board the plane.

This tightening measure will last for one month, and the measure may be extended if necessary.

“At present, it is not fully understood the impact of Omicron’s new variant on Singapore’s epidemic prevention policy, but as long as Omicron does not cause more serious diseases to individuals who have been vaccinated, we can face it with confidence to a certain extent. It’s coming.” Gu Alie said frankly.

Late at night on December 9, the Ministry of Health of Singapore issued an announcement stating that two cases of Omicron strain infection were initially confirmed that day.

One was a frontline worker working at the airport, and the other was an imported case. On December 6th, they arrived in Singapore via the VTL program from France via Germany.

Both cases have been vaccinated and have been given booster shots.

According to BBC reports, at the first Asian Healthcare Summit on November 24, Singapore’s Minister of Health, Ong Yikang, mentioned “lives or life” when talking about the government’s consideration of formulating anti-epidemic policies.

Wang Yikang said that in order to fight the epidemic, maintaining social distancing is feasible in the short term, but cannot be implemented in the long term, because people always have to live, and Singapore is a small country that is highly dependent on external logistics and the flow of people, and the long-term blockade is too costly.

In the long run, only by increasing the vaccination rate can we get out of the epidemic.

At this stage, we were basically very successful in maintaining a low infection rate.

However, after relaxing the social restrictions, cases reappeared because even with high vaccine coverage Among populations with high rates of transmission, the delta variant also has a high transmission capacity.

Although most of these cases are mild, if a large number of sudden infections with mild symptoms flood into the hospital, the medical system will also be overwhelmed and unsustainable. “

In 2021, the focus of many Singaporean companies has transitioned from survival to recovery.

Although they are optimistic about the recovery and growth in the coming year, there are still uncertainties and imbalances in the industry as a whole.

According to the report, in 2021, corporate sentiment in Singapore rebounded.

32% of companies said they felt the negative impact of the epidemic, compared with 63% a year ago.

However, among the people who have been negatively affected by the epidemic, nearly 70% said that it will take more than a year to fully recover, and only a quarter of companies believe that they can rebound in the next 6 to 12 months.

“As the emergence of Omicron has shown, we have not gotten rid of the epidemic in any way.

However, at least in Singapore, we are confident that we can start to return to normal without suffering the same way other countries that are at the epicenter of the epidemic.

A huge impact. Thanks to Singapore’s high vaccine coverage, the overall severity of the harm caused by the epidemic has dropped significantly.

Compared with the situation of the COVID-19 epidemic in 2020, it now looks more like a flu to us.” Gua Lie said.