Compared to other countries’ “coexistence with the virus”, “Fortune” described Singapore’s four-stage unblocking strategy as “emphasizing the virus carefully.”

Singapore originally planned to enter the second phase of “transition A” in early September. At this time, 80% of the population must have received two doses of the vaccine. Moreover, after the gradual opening up before, the number of confirmed cases requiring oxygen support or intensive care in the country has not increased significantly, and medical facilities have not been under tremendous pressure.

As of September 4, local time, the above goals were basically achieved. However, Singapore chose to stop at the first stage of the “preparatory period”, neither tightening nor relaxing the epidemic prevention.

In response to a reporter’s question, “The critical illness data is very good, why are you hesitant to unblock it”, Singapore’s Anti-epidemic Inter-agency Working Group (hereinafter referred to as the Anti-epidemic Team) and Finance Minister Huang Xuncai pointed out that the number of confirmed cases in the country has increased significantly in the past two weeks, which is more recovery. Caused by social activities. Considering that there is a one to two week lag from infection to emergence of severe illness, Singapore will continue to observe the situation, and the main concern is the number of people in need of assisted oxygen support or intensive care.

In addition, Singapore will launch two reforms of epidemic prevention measures from now on, including the promotion of “third dose vaccination” and “home rehabilitation of confirmed cases.” The purpose is to further reduce medical pressure.

“Since the decision has been made to adopt the strategy of ‘co-existence with COVID-19’, epidemic prevention measures are the last resort to avoid overloading the medical system.” Lianhe Zaobao said.

Two types of people need to be vaccinated “third shot”

Singapore has made it clear that starting this month, two types of people need to be vaccinated with the “third shot.”

According to the relevant documents of the Ministry of Health of the country, people aged 60 years and above and those who live in nursing care institutions need to intensify the third dose of the same vaccine 6-9 months after the second dose of the new mRNA vaccine. “Lianhe Zaobao” reported that some people over the age of 60 who had completed two doses of vaccinations in March this year have successively received “intensified injections” notices.

Prior to this, the United States, Britain, Israel, Germany, etc. also proposed “strengthening needle” plans for these two types of people. The difference is that Europe and the United States require people with impaired immune function to be re-fed 6 months after vaccination. Singapore stated that the third injection should be completed 2 months after the two doses of mRNA vaccination, with a shorter vaccination cycle.

The Ministry of Health of Singapore stated that the above two types of people are more likely to induce a strong immune response after being vaccinated with 3 doses, which can significantly reduce the risk of hospitalization, severe illness or death after the infection. 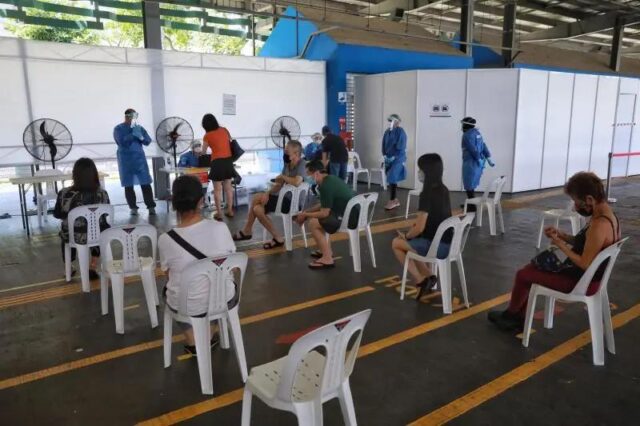 Photo caption: From October 1st, Singaporeans will be able to go to 20 rapid testing centers across the island to do COVID-19 testing at their own expense. /The Straits Times

“Singapore’s fight against the epidemic is divided into two distinct stages.” According to Fortune’s analysis, the first wave of migrant workers occurred in Singapore. They were isolated in small dormitories with poor sanitary conditions, and it was almost impossible to stop the virus. spread.

Xu Liyang, an associate professor at the Suriford School of Public Health at the National University of Singapore, said that Singapore is “very lucky” in this wave of epidemics. “A series of strict measures isolate immigrants and laborers in dormitories. Therefore, for most of 2020, the daily number of new cases in the community has remained in the single digits. In addition, most of the immigrant laborers are young and healthy, so the rate of severe illness is low. “

The second wave of outbreaks in Singapore occurred in community populations due to the release of delta mutant strains and epidemic prevention.

As of September 5, local time, Singapore has newly confirmed 1,233 local cases, doubling the number of infections from the previous week. During the same period, Singapore had 653 hospitalized patients with COVID-19. Among them, 24 needed supplemental oxygen support, and 5 others were admitted to the intensive care unit. These 5 people are all over 60 years old, 4 of them have not been vaccinated, and 1 only received 1 dose.

Associate Professor Mai Xiwei, Director of Medical Services of the Ministry of Health of Singapore, said that since August 21, no confirmed cases have been transferred to the intensive care unit. In the past 28 days (as of September 3), the rate of severe illness or death among unvaccinated people was 9.2%, and 1.3% of those who completed the vaccination. “The risk of severe illness for those who have completed the vaccination is reduced to 1/7 of that of those who have not been vaccinated.”

Picture description: As of September 5, local time, the situation of assisted oxygen support (above) and intensive care (below) for confirmed patients in Singapore. Black is “inoculated with two doses”; blue is “inoculated with one dose”; pink is “unvaccinated”. /Ministry of Health Singapore

“In the future, the severe illness rate and death rate of those who have not been vaccinated may reach the peak since the outbreak.” Professor Zhang Yiying, Dean of the Suriford School of Public Health, National University of Singapore, pointed out in a recent article in The Straits Times.

As of September 4, 81% of Singapore’s population had completed two doses of vaccination, and 83% had at least one dose of vaccination. Singapore’s Ministry of Health estimates that the local vaccination rate will reach 85% of the population within September. However, children under 12 did not receive a dose. At the same time, nearly 100,000 people over 60 have not been vaccinated. 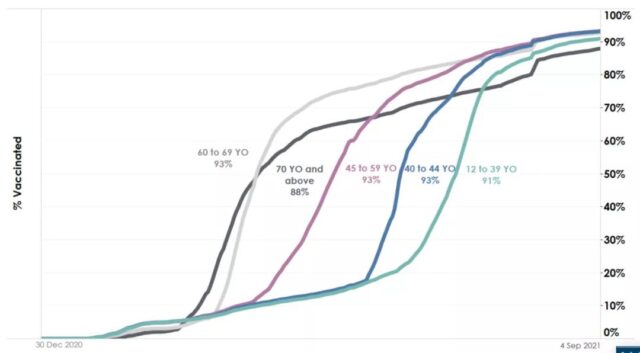 Picture description: As of September 4, local time, all ages in Singapore have not reached 100% vaccination. /Ministry of Health Singapore

A mathematical model study by Saw Swee Hock School of Public Health at the National University of Singapore shows that in 2022, 2100 people over 60 will be transferred to the intensive care unit due to COVID-19. Among them, 480 may die, and most of them will not be vaccinated. “The vaccination rate for people over 60 will increase by 5%, and the mortality rate will be drastically reduced by 60%. Simply put, vaccination is a life-and-death issue for the elderly.”

Singapore’s Health Minister Wang Yikang said that the panel of experts will continue to evaluate the vaccination data of each group, and focus on the rare and serious side effects that occur more frequently in young people, as well as the effectiveness of mixed vaccination. Currently, Singapore is still evaluating the data and is expected to approve the COVID-19 vaccine for people under 12 years of age in early 2022.

“Entering the’transitional period A’means that the COVID-19 pneumonia will be regarded as an endemic epidemic. Once this stage is entered, people must do a good job of psychological construction, and sooner or later there will be the first case of infection and death of a person who has been vaccinated.” Zhang Yiying The professor said.