The Japan Ministry of Health, Labor and Welfare explained in a special group on the 21st that there were 147 alleged adverse reactions reported by medical institutions based on the Japanese Vaccination Law in the third vaccination of the COVID-19 vaccine made by Pfizer in the United States.

It was almost the same as 0.02% for the first and second times.

There were 9 serious side reactions. Of these, 3 cases were anaphylaxis and 1 case was thrombosis, both of which were recovering or improving.

There was a report of the death of a female (57), but the causal relationship is unknown, saying that “there is only a report that she died from her family.”

In addition, there was a report of the death of a male (70) after the third vaccination with the US Moderna vaccine. The causal relationship is “cannot be evaluated due to lack of information.”

The expert group also explained that the antibody titers of 252 people one month after the third inoculation of the Pfizer vaccine increased by an average of 49.6 times. 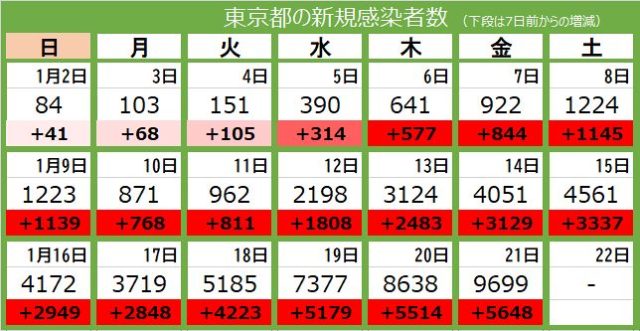 The Tokyo Metropolitan Government announced on the 21st that it has confirmed 9699 newly infected people with the new coronavirus.

The number of newly infected people on the 1st exceeded the highest number of 8638 on the 20th, reaching the 9000 level for the first time. It is the third consecutive day to update the record high.

Currently, there are 11 seriously ill patients hospitalized according to Tokyo standards.