It is well known that de novo mutations play an important role in the development of sporadic disorders of reduced fitness.

Recently, an article was published in the international journal Nature Communications entitled “A de novo paradigm for male …. It is well known that de novo mutations play an important role in the development of sporadic disorders of reduced fitness.

Recently, in a research report titled “A de novo paradigm for male infertility” published in the international journal Nature Communications, scientists from Newcastle University and other institutions have identified a serious form of male infertility through research. Novel genetic mechanisms.

This is an important breakthrough in understanding the root cause of male infertility, or provides new ideas and hope for the later development of new targeted therapies. 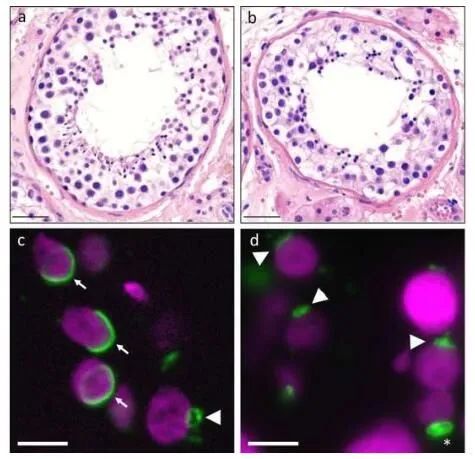 Testicular histology and aberrant acrosome formation are described in controls and TOPAZ1 probands.

De novo mutations that are not inherited from the father’s or mother’s body may play a key role in male infertility, the researchers say.

The researchers found that mutations occur when the DNA of both parents’ bodies is replicated during fertility, leading to male infertility later in life.

The researchers hope that this latest study may, in the future, shed light on the causes of infertility in couples and help develop the best treatments.

“This is a real paradigm shift in our understanding of the causes of male infertility,” said researcher Professor Joris Veltman.

Most genetic research has looked at recessive genetic causes of infertility, meaning that both parents may carry specific genetic mutations, and when offspring males inherit copies of these mutations, infertility occurs, leading to later fertility There is a problem with the ability.

However, this study found that mutations that occur when the parents’ DNA replicates during fertility may play an important role in the fertility of their offspring males.

However, researchers do not currently understand the reasons behind most male infertility, and this study may provide relevant clues.

In the article, the researchers collected and studied DNA samples from 185 infertile men and their parents’ bodies and identified 145 rare protein-altering mutations that are likely to negatively affect male fertility.

Up to 29 of these mutations affect the function of genes directly involved in spermatogenesis (the process of spermatogenesis), or other cellular processes associated with fertility.

What’s more, the researchers identified mutations in the RBM5 gene in multiple infertile men, and previous studies in mice showed that the gene plays a key role in male infertility.

Importantly, most of these mutations cause the major form of infertility, a gene that requires only one mutation.

Therefore, there is a 50% chance that infertility caused by these mutations will be passed on to male offspring (if assisted reproductive technology is used), which can lead to infertility, especially in sons.

Millions of children are currently born through assisted reproductive technology because of infertility couples, and the findings of this paper suggest that a significant proportion of these children may inherit infertility from their fathers.

Professor Veltman said that if we could make a genetic diagnosis, we could better understand the problem of male infertility and why some infertile men are still able to produce the sperm needed for successful assisted reproductive technology.

Armed with this information and research by other scientists, the researchers hope that clinicians can improve counseling on couples-related issues and suggest the best strategies for getting a wife pregnant, or excluding appropriate medically assisted procedures.

It is estimated that up to 7% of men are affected by infertility, and 50% of infertility problems in heterosexual couples are related to men, and in about half of male infertility cases, research on the reasons behind it People are not clear.

In the future, the researchers hope to expand their research by analyzing more infertile men; the researchers will also further study these newly identified mutated genes, which are related to sperm production and overall human fertility. very critical.

Taken together, the results of this study suggest that de novo mutations may play a key role in severe male infertility and are also novel candidate genes affecting human fertility.