Lung Cancer:  ADC will play the strong role In the post PD-L1 era.

Antibody-drug conjugate (ADC) is an anti-tumor therapy that can directly deliver cytotoxic drugs to tumor cells, so it has both “targeted” and “cytotoxic chemotherapy”.

This article retrospectively analyzes the design, mode of action and drug resistance mechanism of ADC drugs in the field of NSCLC.

ADCs started clinical trials as early as the 1980s, and in 2000 Gemtuzumab-ozogamicin, an ADC for the treatment of acute myeloid leukemia, was granted Fast Track by the FDA.

At the same time, the efficacy of first-generation ADC drugs is more complicated due to the low efficacy of the payload, the instability of the ADC linker due to non-cleavable/acid-intolerant, and excessive losses in the systemic circulation.

Third-generation ADCs are improved by increasing the heterogeneity of ADC molecules with a high drug-to-antibody ratio (DAR).

At present, the efficacy of the new generation of ADCs has been clinically verified in the form of single drug/combination drug.

Mechanism of action and drug design of ADCs

The main mechanism of ADC is antibody binding to target antigen, linker cleavage after internalization, and release of cytotoxic payload.

The ultimate meaning of ADC is to maximize tumor killing and minimize systemic toxicity. In hematological malignancies, the target antigen should ideally have little or no shedding into the circulation.

The antibody is linked to the cytotoxic payload through a molecular linker that has a major impact on the overall potency, efficacy, safety, and eventual success of the ADC.

The linker molecule itself is composed of linker, spacer, and release (or “trigger”) components (Figure 2), which must be considered separately in their design, where the attachment site in general plays an important role in overall ADC effectiveness and the most important role in toxicity.

To release the payload, the former requires biochemical signals, such as the presence of certain enzymes, while the latter requires spontaneous degradation of the linker.

If the linker is cleavable, it needs to be effectively cleaved in all tumor cells to avoid occurrence in healthy tissues. Ideally, the payload capable of efficiently killing tumor tissue would be released from the antigen-ADC complex in tumor cells.

If ADC transport to tumor cells is blocked, high surface expression of antigen on tumor cells alone may not guarantee efficient payload delivery.

This may be influenced by factors such as larger ADC molecules, poorer extravascular matrix distribution of the drug, and poor antigen docking due to local TME effects such as low pH.

Regardless, high antigen affinity tends to correlate with more efficient overall ADC transport in the molecule.

Ideally, the payload should remain stable in the circulation after release from the ADC complex to exert a local antitumor (or “bystander effect”) effect in the surrounding TME (even if independent of the internalization of the ADC receptor complex). , can also exert drug efficacy).

The average value of chemotherapeutic molecules attached to each antibody molecule, known as the drug-to-antibody ratio (DAR), is one of the important properties of ADCs.

ADCs have a broad spectrum of dose-limiting toxicities, including hepatic, neurological, and ocular-related events.

These toxicities arise primarily from off-target effects caused by the premature release of ADC payloads in circulation, but may also result from ADC binding to noncancerous expressors of target antigens.

Most of the payloads used in ADCs are highly potent and have cytotoxicity in the picomolar range, which is fundamental to the efficacy of ADCs, and only <1% of injected ADCs localize to tumor tissue in the systemic circulation. In addition, antibody binding activity as part of ADC transport may also lead to adverse ADC reactions.

In the field of non-small cell lung cancer, a variety of ADC drugs are currently under development, and this article summarizes ADCs currently being evaluated in phase II/III clinical trials.

These trials explored emerging oncogenic targets (eg, HER2, TROP2) in advanced NSCLC. There are currently no registration trials evaluating the efficacy and safety of early-stage NSCLC ADCs.

T-DM1 is an ADC composed of a humanized, monoclonal, anti-HER2-targeting drug, trastuzumab, and a cytotoxic payload, the microtubule inhibitor maytansine (DM1), linked by a thioether linker. HER2 gene overexpression (with or without amplification) is a biomarker for targeted therapy in advanced breast cancer.

T-DM1 is the first ADC drug approved for the treatment of breast cancer, and its pivotal phase III EMILIA clinical trial recruited a total of 991 patients with HER2-positive advanced breast cancer and were randomly assigned to the T-DM1 group and the lapatinib + capecitabine group , the results showed that the median progression-free survival (mPFS) and median overall survival (mOS) in the T-DM1 group were longer than those in the lapatinib + capecitabine group (mPFS: 9.6 months vs 6.4 months) , HR=0.65, P<0.001; mOS: 30.9 months vs 25.1 months, HR=0.68, P<0.001).

In a phase 2 basket trial, patients with HER2-mutant lung cancer achieved a clinical benefit of 44% ORR, with an mPFS of 5 months.

After enrolling additional patients with HER-mutated and/or amplified lung cancer, the updated ORR and mPFS were 51% and 5 months.

Based on the KAMILLA Phase 3 study, in 2013, the FDA approved T-DM1 for the treatment of HER2-positive metastatic breast cancer who had previously received taxane and trastuzumab (TH regimen), and this indication was approved in China in June 2021.

New research data now suggest that TDM1 may have additional antitumor effects in addition to its cytotoxic payload.

This led the researchers to hypothesize that overcoming such resistance mechanisms might resensitize cancers to TDM1 and other ADCs and improve efficacy.

For example, the upregulation of EGFR by tumor cells after TDM1 treatment led directly to the initiation of a phase 2 trial (TRAEMOS) evaluating the efficacy and safety of TDM1 in combination with osimertinib in advanced EGFR-mutant NSCLC.

Trastuzumab Deruxtecan is an emerging, HER2-targeting ADC inhibitor composed of a humanized anti-HER2 IgG1 mAb (trastuzumab) linked to the topoisomerase I inhibitor DXd via a cleavable tetrapeptide linker made.

The Phase 2 DESTINY-Breast01 trial has demonstrated its efficacy as a third-line systemic treatment for patients with advanced HER2-overexpressing or HER2-amplified breast cancer.

Trastuzumab Deruxtecan showed activity even in low-to-moderate HER-overexpressing breast cancer with an immunohistochemical score of 1+ to 2+.

However, it is worth noting that about 45% of patients had central nervous system (CNS) metastases at enrollment, and this subgroup was consistent with the overall population in terms of final ORR, PFS, and DOR results.

Based on this data, both TDM1 and TDXd were granted Breakthrough Therapy Designation by the FDA for HER2-mutant advanced NSCLC.

Another point of concern is the safety issue, the significant dose-limiting toxicity of TDXd treatment – interstitial lung disease (ILD).

The incidence in these patients enrolled was 10% (any grade). Up to 10% of patients permanently discontinue treatment due to ILD.

In fact, HER3 expression is upregulated in advanced EGFR-mutant NSCLC cells (especially when they become resistant to EGFR-TKIs), which is considered to be one of the factors of EGFR/HER2-mediated resistance.

And this part of patients is often in a difficult situation after the failure of EGFR TKI and platinum-based chemotherapy.

Patritumab Deruxtecan is a novel ADC targeting HER3, which is composed of monoclonal antibody Patritumab, a tetrapeptide linker, and the topoisomerase I inhibitor Deruxtecan (Dxd).

Although Patritumab uses the same linker-payload system as T-DXd, Patritumab has a higher DAR than anti-HER2 mAbs.

Its first-in-class formulation is currently in a Phase I/II study in repeatedly-treated EGFR 19 deletion/L858R-mutant NSCLC patients who developed a HER3 mutation during disease progression (HERTHENA-Lung01 study). ).

Likewise, this benefit was seen after resistance to other different EGFR TKIs, including C797S, MET, HER2 amplification, and BRAF mutations.

Datopotamab-Deruxtecan is a ‘first in class’ ADC targeting trophoblast cell surface antigen 2 (TROP2). TROP2 is a ubiquitously expressed transmembrane glycoprotein and is overexpressed in many tumors (eg breast cancer, lung cancer, …) and is of great concern as a poor prognostic feature.

Dato-DXd consists of a humanized anti-TROP2 mAb linked to the cytotoxic drug Deruxtecan payload via a cleavable tetrapeptide linker.

Based on these results, 6 mg/kg was selected as the registration randomized Phase 3 TROPION-Lung01 study dose.

In addition, in the TROPION-PanTumor01 study, antitumor activity was also observed with Dato-DXd treatment, with an ORR of 35% and a mDOR of 9.5 months.

IMMU-132 is a novel ADC formed by combining a TROP2-targeting mAb with the hinge of SN-38, the active metabolite of irinotecan.

Another single-arm, multicenter study of previously treated NSCLC patients treated with SG 8 or 10 mg/kg resulted in an ORR of 19% in the efficacy-evaluable population, mDOR 6 months, mOS 9.5 months, and mPFS 5.2 months. >90% of evaluable tumor specimens were highly positive for TROP2 (IHC2+/3+), suggesting that TROP2 cannot be used as a predictive biomarker for efficacy.

Other early-stage trials of novel targeted ADCs in NSCLC 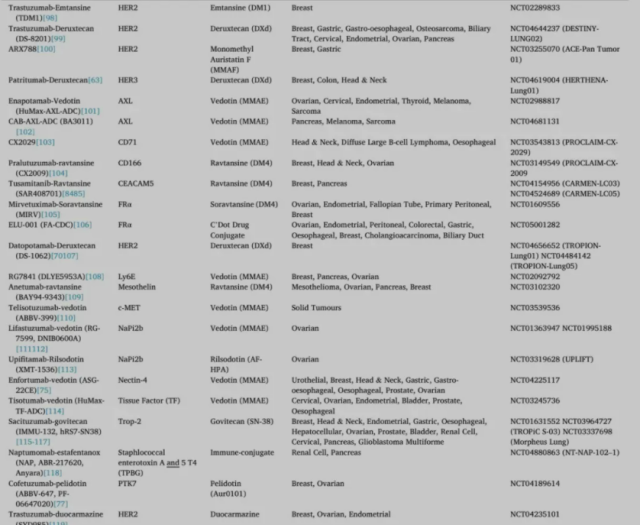