On February 8, clinical-stage biotech company Arcellx announced the completion of an IPO with gross proceeds of $142.3 million.

According to the prospectus, it is currently expected that the net proceeds of this offering and the main purposes of the company’s existing funds are as follows:

1) About 75 million to 85 million US dollars are used to advance the development of the company’s flagship CAR-T cell therapy CART-ddBCMA, including the Phase II pivotal clinical trial iMMagine planned to be launched at the end of 2022. If successful, it intends to submit a BLA to the US FDA. CART-ddBCMA is Arcellx’s first product candidate based on the ddCAR platform for the treatment of relapsed/refractory multiple myeloma (r/r MM). In addition, proceeds will fund research into cell therapy as a front-line therapy for MM in a separate clinical trial, iMMagine-2.

2) Approximately $10 million to $20 million to support the development of its “controllable” CAR-T product candidates developed under the ARC-SparX platform, including the planned ACLX-001 for the treatment of r/r MM and for the treatment of relapsed/refractory Phase I clinical trial of ACLX-002 in patients with acute myeloid leukemia (r/r AML) and high-risk myelodysplastic syndromes (MDS). 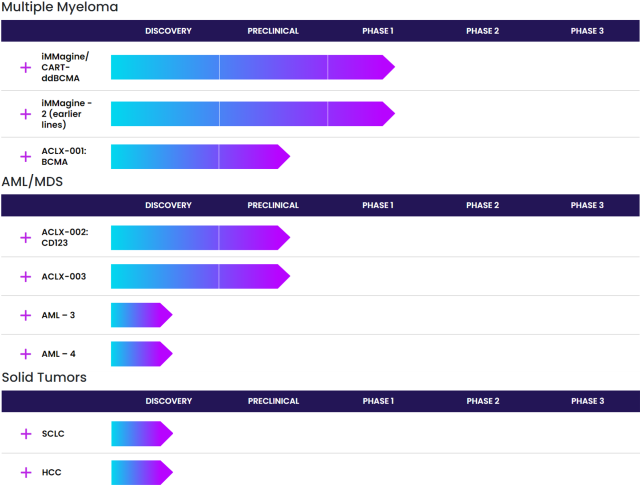 Maryland-based Arcellx is committed to developing safer, more effective and broader innovative immunotherapies to treat cancer and other incurable diseases. The company has previously closed an $85 million Series B (2019) and $115 million Series C (2021).

Given that most existing cell therapy regimens use biologically-based single-chain variable fragment (scFv) binding domains, they often benefit only a limited subset of patients, often result in high toxicity, and have narrow applicability in treatable indications.

D-Domain is a small, stable, fully synthetic binder with a hydrophobic core. When used in CARs, their unique structures may enable higher transduction efficiency, higher cell surface expression, and lower tonic signaling, which are designed to improve target specificity while enhancing binding affinity. The uniqueness of D-Domain allows the generation of diverse libraries of proprietary target-binding domains and serves as the basis for Arcellx’s proprietary ddCAR and ARC-SparX platforms. (Source: Arcellx prospectus and official website)

ARC-SparX consists of SparX protein and ARC-T cells, and is a controllable version based on ddCARs, which replaces the antigen-recognition domain of ddCAR T cells to recognize only SparX protein.

Arcellx’s lead product candidate, CART-ddBCMA, is undergoing Phase I clinical studies for the treatment of r/r MM, and the candidate therapy has been granted Fast Track designation, Advanced Regenerative Medicine Therapy designation and Orphan Drug designation by the US FDA.

Eighty-four percent (16/19) of patients had sustained responses, with a longest response time of more than 21 months.

In terms of safety, there was only one grade 3 CRS or ICANS event at dose level 1 (DL1), accounting for approximately 6% of evaluable cases. All CRS and ICNS events can be resolved using standard interventions. No off-target toxicity was observed.