Drug-resistance mutations in Mycobacterium tuberculosis can affect the development of effective therapies. 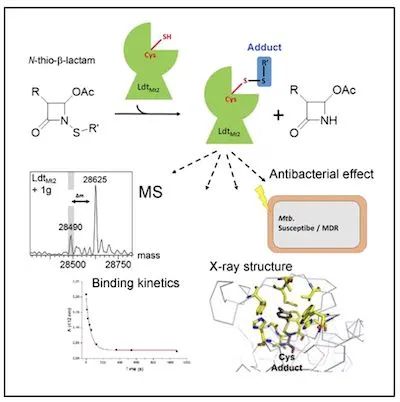 By designing against LD-transpeptidase-2, a potent target of M. tuberculosis, LdtMt2, the authors synthesized and characterized a series of novel N-thio-β-lactams.

Biochemical analysis evaluated these drug candidates and identified five compounds with target-specific kinetic constants equal to or higher than meropenem.

Mass spectrometry combined with crystallographic structures suggest that the five N-thio-β-lactams described above act in an unconventional manner by transferring a sulfur residue from the lactam ring to the active-site cysteine ​​of LdtMt2, This in turn leads to long-term inactivation of the target protein.

Finally, the drug candidates were evaluated in vitro against drug-susceptible and multidrug-resistant clinical isolates of M. tuberculosis, thereby confirming the mycobacterial effect of these novel compounds. 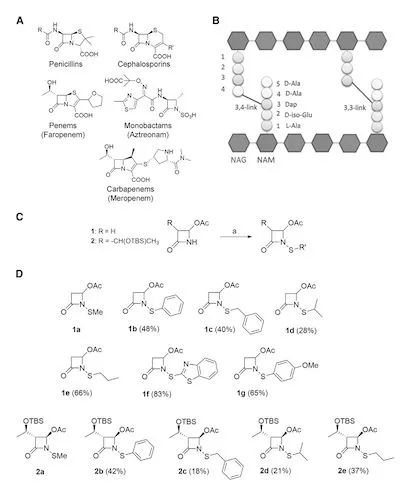 Faropenem is by far the most potent β-lactam inhibitor targeting LdtMt2, which forms a small covalent adduct on the active site cysteine, thus suggesting other similar mechanisms or leading to the formation of small adducts.

Compound β-lactam compounds may be effective candidates. In this study, the authors designed and synthesized 12 N-alkylthio and N-arylthio azetidinones.

To evaluate the target specificity of the aforementioned drugs, the authors employed a spectrophotometric dithionitrobenzoate (DTNB)-based assay.

The BC domain of LdtMt2 contains a cysteine ​​residue, the active site Cys354, which can form covalent adducts with β-lactam compounds.

The structures of this two-domain fragment (BC module) comprising the immunoglobulin-like domain (B) and catalytic domain (C) did not show significant differences compared with the complete fragment of the enzyme comprising the three domains.

Since the mass spectrometry data indicated that LdtMt2 forms novel adducts with potent N-thio-β-lactam compounds, the authors initiated further studies to obtain structural information on the adduct-blocked state of LdtMt2.

The crystal belongs to the P21 crystal form with two polypeptide chains in the crystal asymmetric unit (ASU) with essentially the same configuration, with ordered residues in the active site cleft and the active lid domain covering the active site.

The only disordered region observed was in the structure of the derived adduct at the tip of the lid module, including a three-residue-long fragment (residues 308–310).

The LdtMt2 catalytic site is located on a β-sheet platform where catalytic dyads (Cys354, His336) exist below the active lid module containing residues 303–323. 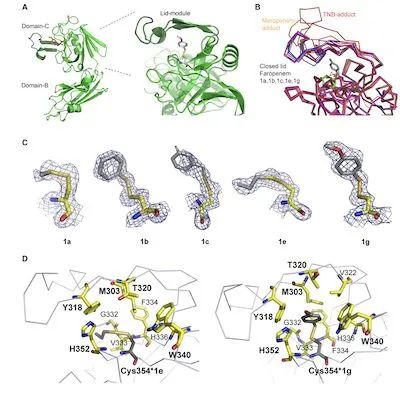 The cysteine ​​SH nucleophile at the active site can attack N-thio-β-lactams at three positions.

Attack on the carbonyl group leads to a ring-opening reaction leading to the formation of thioester adducts, representing a classical inhibitory pathway for bacterial transpeptidases by β-lactam antibiotics.

The effect of this mechanism of action on LdtMt2 has also been observed in the case of several beta-lactams including meropenem and faropenem.

Attack of the methyl group by the Cys354-SH nucleophile results in an alkylation reaction; however, it is limited to more oxidized sulfur derivatives such as dimethyl sulfate. Additionally, the Cys354-SH nucleophile attacks the sulfur atom, resulting in mixed disulfide adducts; compared with C–N (184 kcal/mol, route A) or C–S (167 kcal/mol, route B) , this pathway involves disruption of the weakest N–S bond (111 kcal/mol).

Furthermore, following the concept of hard and soft, more favorable interactions can be obtained between soft-SH nucleophiles such as cysteine-dependent enzymes and electrophiles such as methyl sulfide.

Consistency of results from structural analysis and mass spectrometry indicated a specific catalytic reaction and the resulting mixed disulfide formation.

Another class of compounds, isothiazolones, has been reported to have a similar mechanism in inhibiting the cysteine ​​protease cathepsin B and histone acetyltransferase P300/CBP-related factors.

The LdtMt2-catalyzed transpeptidation reaction begins with a nucleophilic attack on the Dap carbonyl residue of the cell wall peptide stem, releasing the D-Ala residue.

Docking of the N-thio-β-lactam might place its S group in a favorable position to prevent nucleophilic attack by Cys354 at the active site.

The resulting mixed disulfide bonds are stable modifications that lead to irreversible inactivation of the enzyme by blocking the catalytic mechanism and blocking the substrate-binding cavity.

Finally, the authors selected N-thio-β-lactam compounds 1a, 1b, 1e, 1g and 2a for preliminary testing of growth inhibition against drug-susceptible clinical isolates of M. tuberculosis.

The results showed that compounds 1e, 1b and 1g inhibited the growth of drug-susceptible clinical isolates of Mycobacterium tuberculosis at a concentration of 20 μg/mL.

It has long been thought that the limited application of β-lactam antimicrobials in M. tuberculosis is due to the rapid hydrolysis of broad-spectrum mycobacterial class A β-lactamases (BlaC).

In the presence of clavulanic acid, susceptibility testing for ampicillin, amoxicillin and cephalosporins showed MIC values ​​>16 μg/mL, still below the achievable concentrations in serum.

In contrast, the meropenem-clavulanate combination was also highly active against sensitive and extensively drug-resistant strains (MIC < 1 μg/mL) in anaerobic culture.

The present study showed that the MIC of meropenem in the presence of clavulanic acid resulted in a H37Rv of 32 μg/mL, a drug-susceptible isolate of 8 μg/mL, and two MDR isolates, MDR-1 and MDR-2, at 8 μg/mL. These data are consistent with the literature Data is consistent.

The in vitro bactericidal activity of clavulanate-meropenem has been well established, showing that the susceptibility of M. tuberculosis to this combination (MIC range of 0.125–32 μg/mL) is independent of the level of resistance to first- or second-line antituberculosis drugs.

However, the difficulty of administering meropenem-clavulanate is a major obstacle to its use as an alternative therapy for tuberculosis.

In contrast, faropenem, a stable and orally available β-lactam, effectively kills M. tuberculosis even in the absence of clavulanate with an MIC of 1.3 μg/mL.

The N-thio-beta-lactam compounds characterized herein have a defined mechanism of action against the validated beta-lactam target, LdtMt2.

One of the most potent compounds, 1e, exhibited drug-sensitive activity as well as activity against MDR isolates of Mycobacterium tuberculosis with a MIC of 20 μg/mL, suggesting that N-thio-β-lactams may represent established targets for the future. Target-specific effects and mechanisms of action for antibiotic development in multidrug-resistant tuberculosis.