Organoid study: HPV is not the only culprit of cervical cancer?

Organoid study: HPV is not the only culprit of cervical cancer? Chlamydia trachomatis is also an accomplice.

The cervical mucosa is a protective barrier against pathogens invading the female upper reproductive tract and is often challenged by invading pathogens and dysbiosis.

Cervical cancer is a common gynecological malignancy and the second largest “cancer killer” after breast cancer that threatens women’s health.

Cervical cancer is a serious threat to the health of women in our country.

It is well known that HPV is an important pathogen that promotes the occurrence and development of cervical cancer.

But studies show that while more than 80 percent of women will get HPV in their lifetime, fewer than 2 percent will develop cervical cancer .

Chlamydia trachomatis is associated with an increased incidence of HPV infection in patients with invasive cervical and ovarian cancer.

Some researchers believe that chlamydia infection may change the immunity of patients, making them susceptible to HPV, and thus prone to progress to cervical cancer, but the kinetics and underlying mechanisms of co-infection remain unclear.

After the Hans Clevers team developed the first cervical cancer organoid (Organoids) model [1] , the research of organoids in cervical cancer has received further attention and promotion.

Organoids can well simulate the three-dimensional structure and function of in vivo organs in vitro.

Compared with two-dimensional cell lines and pure mouse models, organoids have unique advantages and have been widely used in functional tissue induction, disease model construction, Drug screening and other research.

On February 24, 2022, the Cindrilla Chumduri team from Germany developed a cervical cancer organoid model that mimics HPV and Chlamydia trachomatis co-infection and elucidated the unique transcriptional and The mechanism of post-translational reprogramming of host cells reveals the mechanism of occurrence and development of cervical cancer . 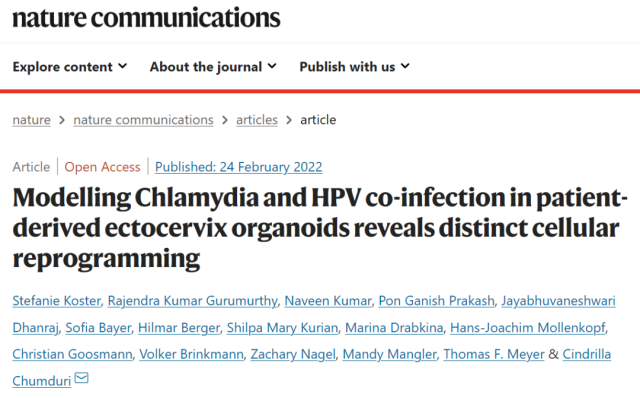 HPV E6E7 refers to the two genes E6 and E7 of human papillomavirus, both of which are early transcription genes, and are often used to detect whether there is HPV infection and the severity of the infection.

The HPV E6E7 gene is positive, which means that the HPV virus is infected, and the viral DNA has been integrated into the cellular DNA, and the protein is expressed at the same time .

To systematically assess the impact of hpv16 E6E7 integration and subsequent co-infection with C. trachomatis on host regulation, extracervical stem cells were isolated from healthy volunteers, embedded in Matrigel to culture 3D organoids, and tested from various The E6E7 gene of HPV types.

External cervical organs from three donors tested negative for the E6E7 oncogene of HPV. These HPV E6E7-negative organoids from healthy donors were used to study the effect of HPV integration on healthy cervical tissue. 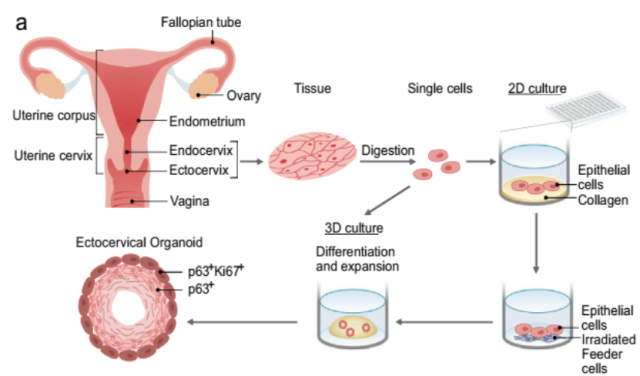 It was found that integration of HPV16 E6E7 into ectocervical organoids induces a phenotype characteristic of cervical dysplasia (CIN, considered a precancerous lesion) . 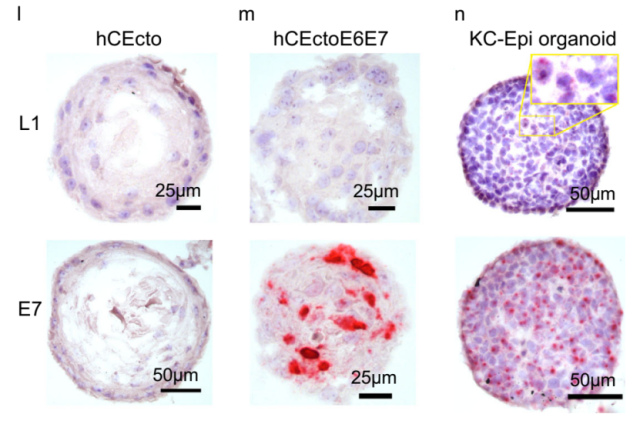 Therefore, the construction of this cervical organoid model opens up an avenue to study the biology of HPV and co-infection. 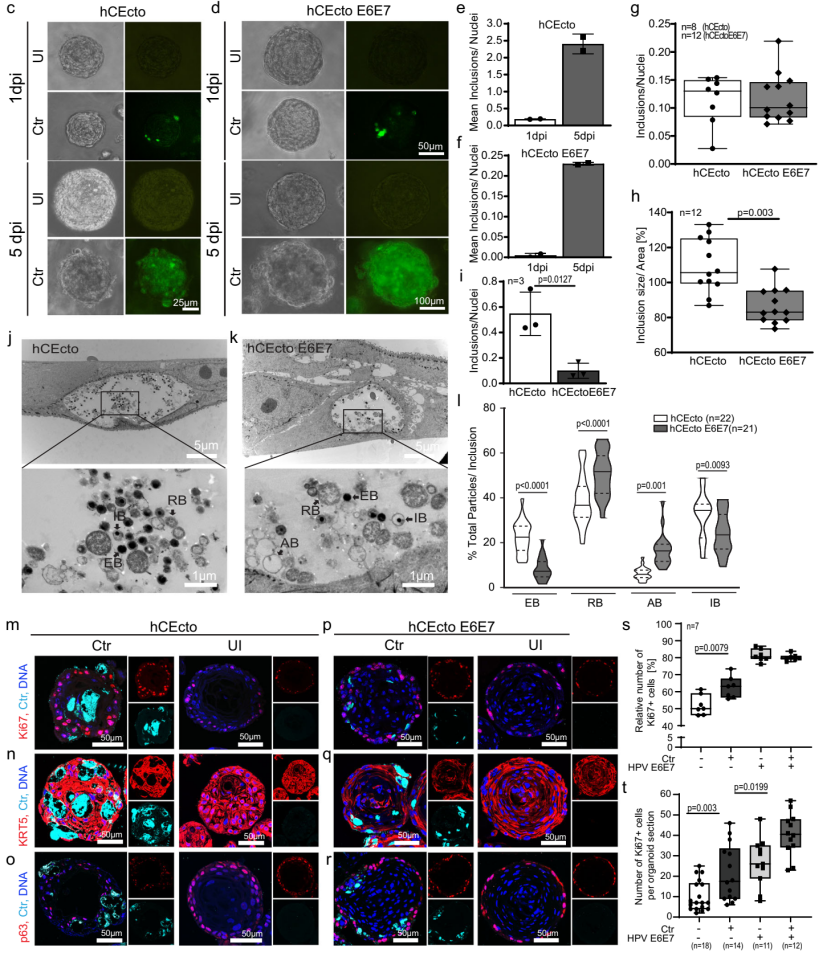 Next, the researchers performed transcriptome analysis to determine the effect of C. trachomatis, HPV E6E7 mono-infection, and co-infection on cell signaling. It was found that co-infection of hCEcto E6E7 cells with C. trachomatis exhibited unique gene expression changes.

Strikingly, of the genes up-regulated by HPV E6E7, 28% were restored to expression levels similar to controls when co-infected with C. trachomatis, or were strongly down-regulated .

Among them, members of the E2F family are the most prominent counter-regulatory transcription factors .

E2F target genes were significantly up-regulated by HPV E6E7, but down-regulated after C. trachomatis infection. It is unclear what effects this C. trachomatis-mediated inhibition of HPV E6E7-induced E2F targets will have on host cells and pathogens.

To investigate the regulation of the Rb-E2F1 pathway by both pathogens, we infected hCEcto organoids and hCEcto E6E7 organoids with C. trachomatis and performed qRT-PCR and immunoblot analysis.

The results showed that in the absence of HPV E6E7 expression, Chlamydia trachomatis significantly inhibited E2F1 and the tumor suppressor p53, whereas co-infection resulted in a significant reduction in TP53 , but not E2F1 and RB1 transcripts.

Therefore, the above results suggest that HPV induces E2F1 activation, while Chlamydia inhibits it . p53 was up-regulated at the transcriptional level after HPV infection and down-regulated after chlamydia infection. Co-infection with HPV and Chlamydia results in the degradation of p53 protein . 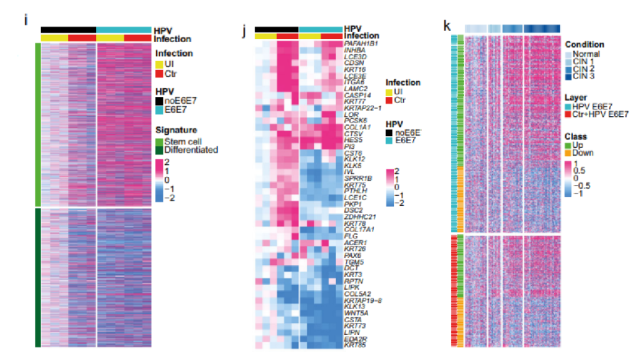 Loss of cell cycle checkpoint gene expression disrupts DREAM complex-mediated regulation, thereby disrupting the balance of the cell cycle, switching from quiescence to proliferation, which is frequently observed in cancer.

Our analysis shows that many DREAM complex target genes are downregulated by Chlamydia, preventing quiescence and promoting cell proliferation in co-infection .

In conclusion, Chlamydia inhibits MMR at the transcriptional and post-translational levels, and it can further inhibit HPV-activated MMR. 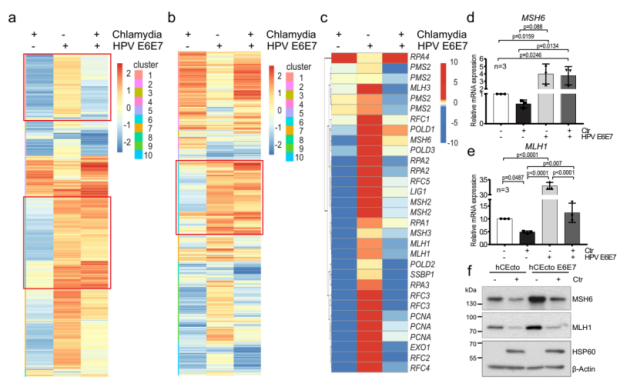 Mechanisms by which Chlamydia and HPV modulate the MMR pathway

Finally, the researchers sought to mechanistically elucidate how Chlamydia and HPV regulate the MMR pathway.

According to literature reports, MMR genes are regulated by E2F transcription factors.

Extensive crosstalk between the Rb-E2F and MDM2-p53 pathways, and both are defective in most human tumors, underscores the critical role of these pathways in regulating important cellular decisions.

The researchers used the protease inhibitors MG-132 and Lactacystin to inhibit the cellular and chlamydial protease CPAF32, and Nutlin-3a to inhibit the interaction between MDM2 and p53 to examine the effect of p53 stabilization on MMR gene expression and protein levels.

The results showed that Nutlin-3a and MG-132 treatments restored MMR gene expression after C. trachomatis infection and could inhibit C. trachomatis-induced p53 degradation, whereas E2F1 degradation was reduced under all treatment conditions .

Notably, the MMR proteins MLH1 and MSH6 were only restored by inhibition of proteasome activity by MG-132.

This result suggests that Chlamydia is involved in p53-independent proteasomal degradation to reduce E2F1 and MMR proteins, and that restoration of E2F1 and p53 proteins can rescue transcriptional repression of MMR genes .

To further investigate how C. trachomatis modulates the MMR pathway in HPV E6E7 co-infection, hCEcto E6E7 stem cells were treated with Nutlin-3a, MG-132 and Lactacystin in the presence or absence of C. trachomatis infection.

The results showed that all treatment conditions reduced the infectivity of C. trachomatis .

These results suggest that proteasomal degradation is an important mechanism that significantly modulates E2F-mediated MMR gene transcription and reduces p53, E2F and MMR proteins in co-infection. 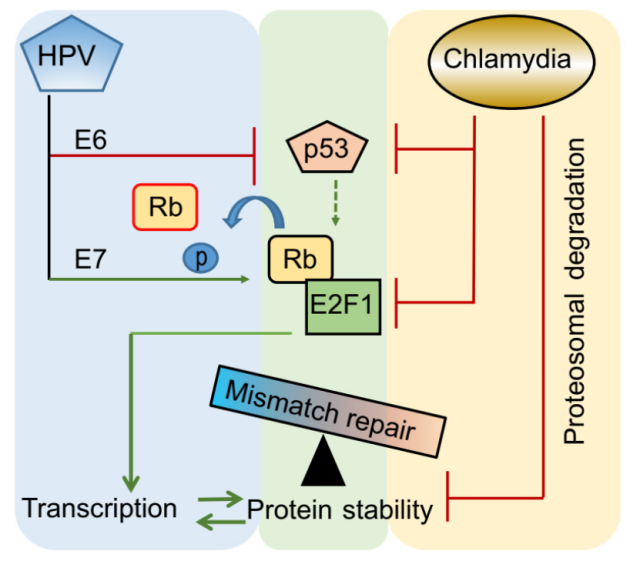 More than 80% of women will be infected with HPV in their lifetime, but less than 2% will develop cervical cancer. Cervical cancer patients are often infected with human papillomavirus (HPV) and Chlamydia trachomatis at the same time , so scientists speculate that the co-infection of Chlamydia trachomatis and HPV is an important , but the underlying mechanism is still unknown.

Viruses can leave detectable DNA fragments in tumors, and viral DNA fragments can be detected in more than 90% of cervical cancers. But unlike viruses, chlamydia leaves few detectable elements in cancer cells, so the exact mechanism by which it induces carcinogenesis is difficult to elucidate.

After infection by HPV and Chlamydia, multiple genes are up-regulated or down-regulated in different ways, affecting the host’s immune response and DNA damage repair.

1) We introduced a cervical organoid model to study the interaction of the stratified epithelial tissue barrier with the individual and co-infection dynamics of HPV16 E6E7 and Chlamydia. The cervical organoids developed and used in this study proved to be excellent in vitro models for studying the complex interactions between epithelial tissue and pathogens and for analyzing the molecular sequelae of early onset events.

2) The researchers systematically revealed the effects of HPV16 E6E7 and Chlamydia trachomatis on host cells, demonstrated the harm caused by multiple or continuous infection and the molecular mechanism of carcinogenesis , and clarified the mechanism of cervical cancer occurrence and development.

Organoid study: HPV is not the only culprit of cervical cancer?