Among cancers, the incidence rate is the second, and the mortality rate is the fourth. On average, one person is diagnosed every minute… This is the current situation of colorectal cancer in some countries [1].

To change this situation, the best way is to conduct colorectal cancer screening comprehensively and early, so as to truly achieve early detection, early diagnosis and treatment.

The 5-year survival rate of patients diagnosed early can reach 80-90%. Less than 15% of patients in the sexual stage can be said to be worlds apart [2].

If you find traditional colonoscopy screening unacceptable, there are other methods available.

The highest risk of death can be reduced by more than 50% in patients with early-stage bowel cancer (HR=0.48) [3].

The study was jointly completed by scientists from the Korea National Cancer Center and the Cancer Prevention and Control Institute.

KCCR collects more than 95% of cancer incidence information in Korea, which greatly reduces the randomness of sampling.

KNCSP has launched early colorectal cancer screening for people aged 50 years and older as early as 2004.

Enrolled patients were diagnosed with colorectal cancer between January 1, 2008, and December 31, 2009, and were 50 to 79 years of age (the FIT screening program targets people aged 50 to 79 years).

The FIT screening history of these patients was obtained through the KNCSP and the time frame was from 2004 to 2009. 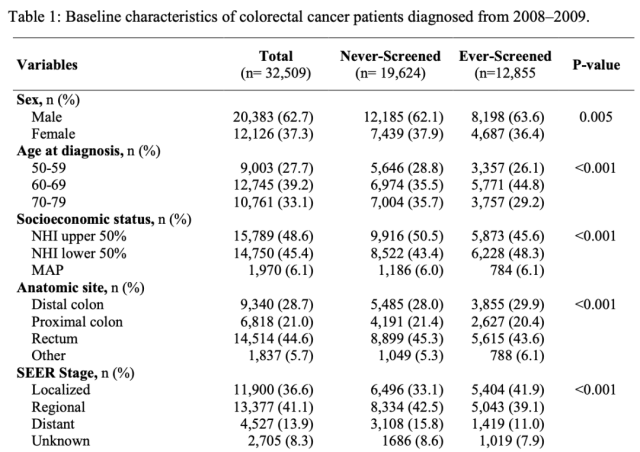 The researchers followed the enrolled patients for 10.5 years and found that compared with patients who had never undergone colorectal cancer screening, patients with a history of FIT screening had a 32% lower risk of death (HR=0.68; 95% CI: 0.65- 0.70) .

Death of a patient is easy to judge, but the cause of death may be either colorectal cancer or other factors.

There was a 25% relative reduction in the risk of colorectal cancer-related death.

Lifestyle also has a significant impact on the survival rate of colorectal cancer.

Although the study did not obtain information on the living habits of patients without screening history, it cannot be directly evaluated, but there is no difference between males and females, which indirectly indicates that lifestyle may affect the survival rate of patients with colorectal cancer.

The long-term benefits of screening are of little consequence.

The 10-year survival rate of colorectal cancer patients in this Korean study is as high as 62%, which is also significantly higher than the recent study data in the United States (54.3%) [7], which may be related to the high rate of early diagnosis of colorectal cancer in South Korea, after all From 2002 to 2013, the number of colonoscopy examinations in Korea increased from 260,000 to 2 million.

However, the study did not include the treatment information of patients, and could not evaluate the relationship between long-term survival and cancer treatment. In addition, the SEER system was used for cancer staging [8], which is inconsistent with the current popular TNM staging system [9].

Despite these shortcomings, this study is the first to evaluate the long-term survival benefit of colorectal cancer screening by FIT in an Asian population. The information was collected from national centers with high reliability.

Compared with European and American populations, South Korea is more similar to some countries in terms of economic foundation, cultural structure, living habits and genetic background, and has greater reference value.

With the aging of the population in some countries, the number of people at high risk of colorectal cancer will increase, and it is more necessary to detect and treat cancer early.

However, only 14% of people at high risk of colon cancer in China have compliance with colonoscopy [10], so it is necessary to use simpler and more reliable technologies to promote early screening and diagnosis of colorectal cancer.

Many domestic units have been developing new early screening methods, including the detection of host DNA in feces [11-13] and the detection of intestinal flora DNA [14-16]. These methods sample similarly to FIT, but perform more reliably than FIT.

Excitingly, large-scale colorectal cancer screenings of hundreds of thousands of people have been carried out in cities [17], which has greatly promoted the prevention and control of colorectal cancer.

It is hoped that the advancement of technology will allow early screening to spread to more colorectal cancers. high-risk groups.