Nature: The inflammatory response in critically ill patients with the COVID-19 turned out to be caused by the use of antibodies to infect immune cells

From the early days of the COVID-19 pandemic, doctors noticed that the lung damage in severe cases of COVID-19 was not caused directly by the virus itself, but by a strong immune response in the patient’s body.

This exaggerated immune response, also known as cytokine storm, is a major cause of acute respiratory distress syndrome and multiple organ failure, although it is designed to fight viral infections. Scientists have long wondered why and how SARS-CoV-2 causes such a severe inflammatory response, which in turn has serious consequences in some infected patients?

Recently, the journal Nature published a new study that revealed the mechanism by which SARS-CoV-2 caused a severe immune response in some patients: The study found that SARS-CoV-2 can infect monocytes and macrophages, and once infected Infection, both types of immune cells release large amounts of cytokines, the warning signs of subsequent severe inflammation.

Surprisingly, the study also found that antibodies produced in patients infected with SARS-CoV-2 sometimes led to more inflammation. Specifically, the entrance of SARS-CoV-2 to infect immune cells is not the well-known ACE2 receptor, but with the help of “antibodies”, with the help of antibodies, infection through another receptor surface protein called Fcγ Immune Cells. 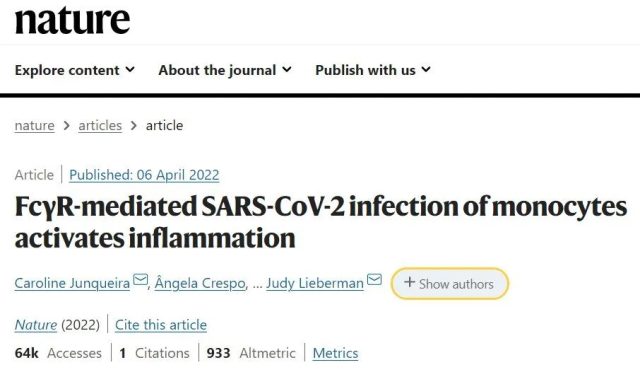 Why cause an excessive inflammatory response

“We wanted to understand the difference between mild and severe COVID-19 patients,” said Judy Lieberman, MD, professor of pediatrics at Harvard Medical School. “We know that patients with severe symptoms after infection have elevated many markers of inflammation, and inflammation is a measure of disease severity. , but we don’t know what triggers the inflammation.”

To do this, the researchers analyzed fresh blood samples from COVID-19 patients in the Massachusetts General Hospital emergency department. They compared the samples with samples from healthy people and patients with other respiratory diseases, and they also looked at autopsy tissue from the lungs of patients who had died from COVID-19.

It turned out that SARS-CoV-2 can infect monocytes in the blood and macrophages in the lungs, both of which are sentinel cells of our body’s immune system, capable of sensing invasive infections in a timely manner and Formation of inflammasomes that activate caspase-1 and gasdermin D. On the one hand, the sentinel cells of these immune cells, after being infected by the virus, will recruit more immune cells to join the fight, resulting in a protective effect, but on the other hand, after the death of the infected monocytes and macrophages, they will release a large amount of of cytokines, leading to an excessive inflammatory response, which, in populations such as the elderly, triggers an out-of-control cytokine storm. 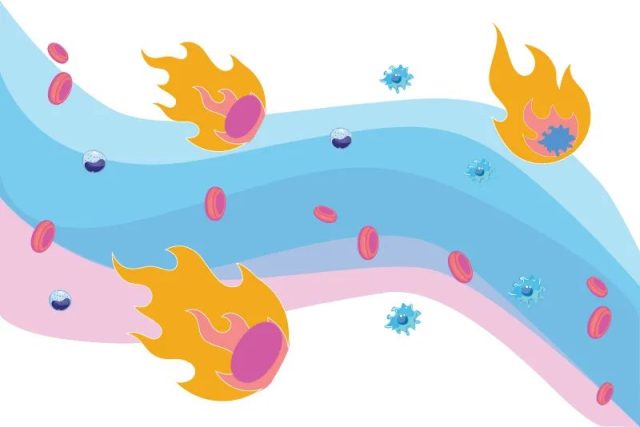 This also explains why after the SARS-CoV-2 virus enters the human body, it is easy to cause an excessive immune response in patients with severe symptoms, and aggravate the disease and even lead to death.

The hidden phenomenon that SARS-CoV-2 can infect monocytes has been overlooked in previous studies, in part because researchers routinely study frozen blood samples, which did not show monocytes that died from infection.

The studies provide a plausible explanation for the severity of COVID-19, says Malik Peiris, a virologist at the University of Hong Kong. “I don’t think it’s the only or most important route, but it’s definitely fun.”

How immune cells are infected?

While the cause of the severe inflammatory response in critically ill patients with COVID-19 was found, another problem arose. Since monocytes do not carry ACE2 receptors, and macrophages have very low ACE2 levels, and it is known that ACE2 receptors are the classic entry point for SARS-CoV-2-infected cells, how does SARS-CoV-2 infect monocytes And what about macrophages?

In experiments with human and mouse cells, the researchers found that SARS-CoV-2 can enter lung macrophages through the presence of a limited number of ACE2 receptors.

But SARS-CoV-2 can also infect cells with the help of antibodies through another surface protein called Fcγ receptors.

When the virus encounters antibodies attached to Fcγ receptors, the virus is “scooped” into the cell.

And this is how SARS-CoV-2 enters monocytes, and the researchers also found that only monocytes with Fcγ receptors can be infected. The researchers further noticed that all infected monocytes carried a receptor called CD16 (FcγRIII) .

While cells with CD16 typically make up only about 10 percent of all monocytes, in COVID-19 patients the number of monocytes with the CD16 receptor is increased, and about half of them are infected. 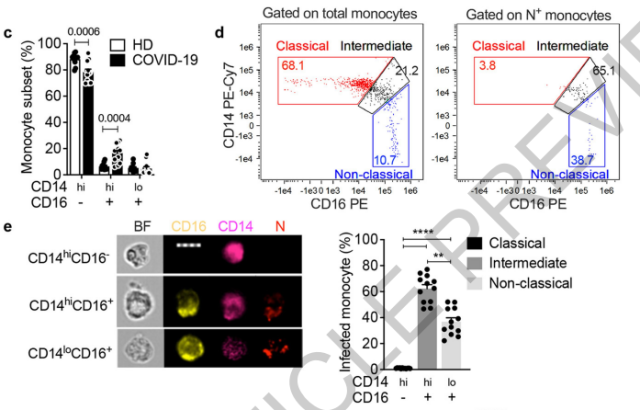 The researchers then found that antibodies produced by the body against the viral spike protein attach to the CD16 receptor. It may seem a bit paradoxical, after all antibodies are used to fight viruses, but in fact antibodies help the virus enter blood mononuclear cells.

Lieberman believes the findings could have implications for the use of monoclonal antibodies to treat COVID-19, helping to explain why the treatment is only effective when given early.

So in theory, this suggests that the antibodies we make to fight COVID-19 actually exacerbate inflammation. However, not all antibodies facilitate the virus to infect immune cells.

Even more reassuringly, the researchers found that the antibodies produced by people who received the mRNA vaccine did not help the virus infect monocytes.

But the researchers also said more research is needed to understand which types of antibodies help monocytes absorb the virus and whether vaccines using other techniques elicit different responses.

With Covid-19 infection, we’ve always wondered if there might be some kind of antibody-dependent boosting effect , which is when the body When encountering pathogen infection, the original neutralizing antibody can not only prevent the virus from invading human cells, but will enhance the replication of the virus in the body, causing serious pathological reactions of the body) . Like dengue fever, the more times a person is infected with the dengue virus, the sicker they get with each subsequent episode.

“I think what’s interesting about this is that it could provide a clue, maybe even some drug targets, as to why some of the inflammation seen in severely ill Covid-19 patients might start the wrong way or get out of control. “Wherry said.