With at least 500 million people infected with Covid-19 worldwide, the ensuing “Long Covid” has become another pandemic.

The U.S. Centers for Disease Control and Prevention (CDC) defines “coronavirus” as a variety of new, recurring, or persistent health problems that may occur in people four weeks or more after they were first infected with the new coronavirus.

The latest research from Stanford University, Yale University and other teams from top universities in the United States has found that these neurological symptoms of “long COVID-19” patients are similar to the cognitive impairment (“chemo brain”) that occurs in cancer treatment.

The microglial reactivity in the white matter of the COVID-19 infection and the consequent neurological dysregulation are the core of the syndrome.

The study focused on the neurobiological effects of respiratory tract infection with SARS-CoV-2 and identified white matter-selective microglial reactivity in mice and humans.

Following the onset of mild respiratory COVID in mice, their hippocampal neurogenesis was persistently impaired, with reduced oligodendrocytes and loss of myelin and markedly elevated CSF cytokines/chemokines, including CCL11.

Research institutions also include New York University, the National Institute of Neurological Disorders and Stroke, and the National Cancer Institute.

The research was published in the top international academic journal CELL on June 12, local time.

Persistent cognitive impairment affects about one in four people with Covid-19, according to previous research.

The latest research shows that this cognitive impairment syndrome greatly increases the incidence of “long COVID-19” along with increased rates of anxiety, depression, sleep disturbance and fatigue, and makes it difficult for infected people to return to their previous occupational levels.

Neuroinflammation is at the core of the pathophysiology of cognitive impairment associated with cancer therapy, suggesting that there may be similar pathophysiological mechanisms in SARS-CoV-2 infection. 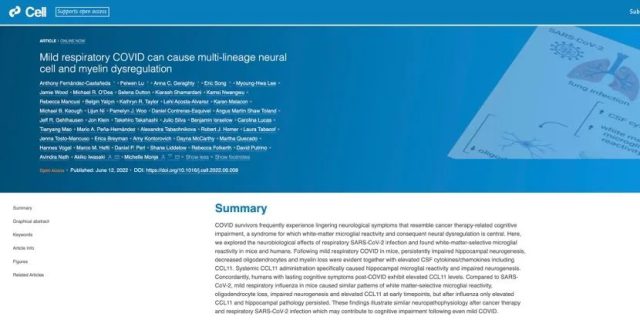 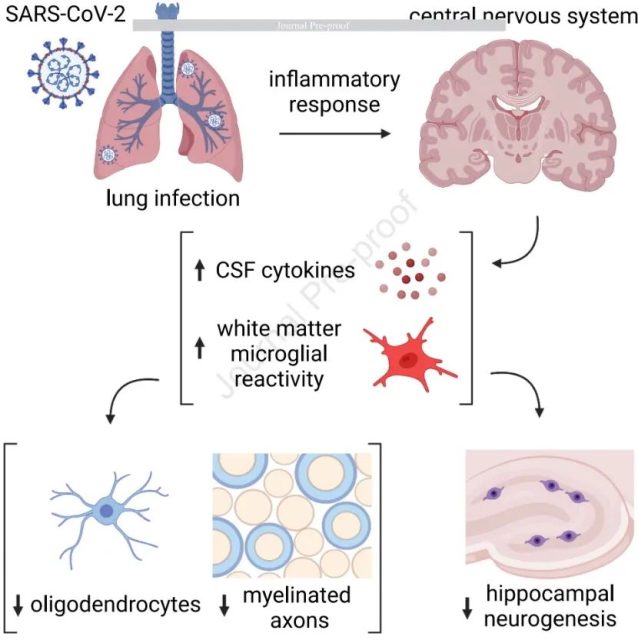 Important findings of the study

• CCL11 factor activates microglia in the hippocampus and impairs neurogenesis

• Respiratory infection with influenza virus can cause a similar reaction, but with a shorter duration

Smaller than astrocytes, its cytoplasm is short and few, the nucleus is round, small and dense, and the cytoplasm has a high electron density under electron microscope, mainly containing mitochondria, ribosomes and microtubules.

In gray matter, oligodendrocytes are mainly located near the perinuclear body; in white matter, they exist side by side between myelinated nerve fibers and form the myelin sheath.

Active movement of oligodendrocytes can be seen in tissue culture.

The main function of oligodendrocytes is to wrap axons in the central nervous system, form insulating myelin structures, assist in the efficient transmission of bioelectrical signals, and maintain and protect the normal function of neurons.

Its abnormality will not only lead to demyelinating lesions of the central nervous system, but also cause neuronal damage or psychiatric diseases, and even brain tumors.

It is selectively recruited by inducing chemotaxis of eosinophils and thus involved in allergic reactions. Elevated expression of CCL11 in human and mouse plasma is associated with aging.

Hippocampus: A key memory center in the brain that is involved in short-term memory formation and is often the focus of research on age-related cognitive decline.

Myelin sheath: A membrane that wraps around the axon of a nerve cell.

Its function is to insulate, similar to the sheath of a wire, preventing nerve electrical impulses from being transmitted from a neuron axon to another neuron axon, avoiding interference.

White matter: It is the place where nerve fibers gather in the brain. Because its area is lighter in color than the surface layer of the brain where the cell bodies gather, it is named white matter.

The researchers demonstrated through a series of experiments that even mild respiratory infections with SARS-CoV-2 can lead to persistent neuroinflammatory changes that lead to dysregulation of nerve cell types important for healthy cognitive function.

Similarly, we found here that even mild respiratory COVID induces marked elevations of multiple cytokines and chemokines, as well as persistent reactivity of white matter microglia in subcortical and hippocampal regions. In contrast, H1N1 influenza caused a partially overlapping but distinct CSF cytokine/chemokine profile and a more restricted pattern of persistent cellular changes.

Systemic inflammation-induced neuroinflammation with consequent glial dysregulation and impaired neurological function is beyond the usual symptoms of COVID. Other viral syndromes such as influenza can also cause microglial reactivity, elevated levels of central nervous system cytokines, and impair cognitive function, even in the absence of neural invasion.

However, the oligodendrocyte deficits observed in the present study after the acute infection phase of SARS-CoV-2 were more persistent than those of H1N1 influenza, and were more consistent with persistent changes after methotrexate chemotherapy.

The specific immunogenicity of SARS-CoV-2 and the persistence of the neuroinflammatory changes observed here, given the size of the infected population globally during this pandemic, have contributed to the crisis of persistent cognitive impairment associated with COVID.

But this finding means that the hippocampus is particularly vulnerable to the neuroinflammation of respiratory infections, consistent with recent reports of structural changes in the limbic nervous system in COVID survivors: This region/circuit-specific role of CCL11 highlights distinct cytokines Potential for the /chemokine profile to exert disease-specific effects on the nervous system, resulting in variable prevalence of certain cognitive or neuropsychiatric symptoms.

Consistent with the clinical similarities of the “COVID-19 brain fog” and “chemo brain” syndromes of cognitive impairment, the findings here illustrate many pathophysiological similarities, including depletion of myelinating oligodendrocytes and loss of myelin sheath .

These include microvascular thrombosis, neuronal loss, cortical inflammation, and in some cases outright brain infection. Consequently, the neurological sequelae of SARS-CoV-2 infection have proven to be common and debilitating.

While the inflammation-induced multicellular dysregulation described here may be reversed by therapeutic interventions, these more severe complications of COVID, such as stroke, may cause irreversible damage to the brain.