Antitumor T cell responses are a major mediator of cancer immunotherapy. However, many other components of the immune system may be required to generate an effective T- cell response.

In a recent study published in Nature , researchers at Dana- Farber Cancer Institute have developed a cancer vaccine that targets both T cells and natural killer (NK) cells simultaneously. 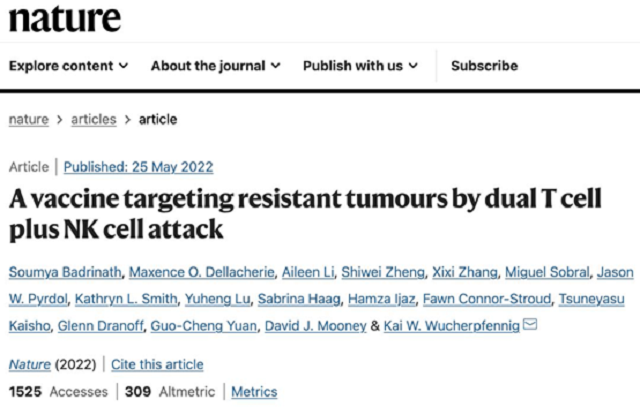 But tumor cells can develop various mechanisms to interfere with the presentation of antigens to T cells, thereby hiding themselves from the immune system.

What’s more, each person’s tumor antigens can be different, making it difficult to design a cancer vaccine that can treat many patients.

The cancer vaccine developed by Dana-Farber Cancer Institute scientists led by Kai Wucherpfennig , MD, targets two surface proteins: MICA and MICB . The expression of these proteins may increase under stressful conditions such as DNA damage.

Problem cells are then eliminated by binding and activating T cells and NK cells. But tumor cells can evade this immune response by cleaving MICA and MICB and shedding them.

In a mouse model of aggressive melanoma, the MICB vaccine significantly shrank tumors, and in some cases even eradicated them, while control mice suffered major tumor growth.

The team also tested the vaccine in mice with melanoma that were resistant to current immunotherapies. Likewise, 50 to 75 percent of the mice remained tumor -free 100 days after vaccination .

Further analysis showed that both T cells and NK cells are required for effective tumor control .

Based on the positive efficacy in mice and some immunogenicity and safety results in monkeys, scientists at Dana-Farber Cancer Institute say they are now planning a first-in-human study of the vaccine.

The vaccine “may also be used in combination with localized radiation therapy, as DNA damage enhances MICA/B expression in cancer cells ,” the researchers wrote in the Nature study .

In another study published recently in Science Immunology, a team from Stanford University found that adding Dynavax ‘s vaccine adjuvant to Dragonfly Therapeutics ‘ interleukin 12 (IL-12) drug and Direct injection into tumors can mobilize B cells and induce systemic antitumor responses . 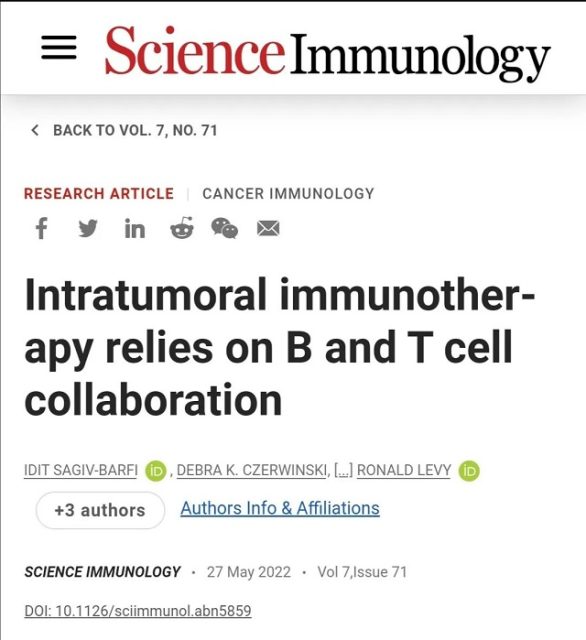 In their study, a Stanford University team led by Ronald Levy , MD, found that B cells unexpectedly contributed to the shrinking of distant tumors after treatment with localized immunotherapy .

By activating immune cells, the cytokine IL-12 is known as a potent antitumor agent. But systemic toxicity is a major obstacle to its adoption as a treatment.

The Stanford team attempted to inject a low-dose regimen of Dragonfly Therapeutics ‘ modified IL-12 drug locally into tumors to reduce toxicity while harnessing its therapeutic potential.

While the treatment was designed to enhance T cell-mediated responses, the scientists were surprised to find that B cells were also essential in this systemic response.

The team found that depletion of B cells with anti- CD20 antibodies before and during combination therapy eliminated systemic effects.

After further studying the B cells, the team found that the B cells produce tumor-specific antibodies.

As the first tumor in the lymph nodes, they present tumor antigens to T cells. Those experienced T cells then travel to distant tumors and kill them.

“Our data suggest that, in the future, the role of B cells in other forms of tumor immunotherapy should be investigated, and possibly with the addition of drugs that provide B cell stimulation, a T cell stimulation approach that enhances ,” the Stanford team wrote in the study. Efficacy and specificity of immunotherapy regimens.”