Eventually, the tumor will create an immunosuppressive environment to inactivate T cells, which is the so-called “T cell exhaustion” phenomenon, thereby helping the tumor grow uninhibited.

Neoantigens can drive effective anti-tumor T cell responses. In the past ten years, scientists have been exploring ways to help fight cancer through vaccination.

These experimental vaccines are designed to stimulate the body’s own immune system to destroy tumors by injecting cancerous protein fragments found in tumors.

However, in most cancers, the reactivity of T cells to neoantigens is significantly limited, and these cancer vaccines have not yet been approved for marketing.

The study found that vaccination against certain tumor neoantigens can enhance the overall T cell response and help shrink tumors in mice. This study helps determine which proteins should be included in cancer vaccines, targeting the proteins found in the study Vaccination can help awaken the dormant T cell population that targets these proteins, thereby strengthening the overall immune response.

The research team previously constructed a KRAS/p53-driven (KP) orthotopic lung adenocarcinoma mouse model to express tumor-specific neoantigens. CD8 T cell neoantigens from both SIIN and SIY models are expressed in tumor cells in the form of fusion with luciferase, also known as LucOS. In the LucOS model, SIIN and SIY are expressed simultaneously, which provides an experimental model for studying the interaction of different neoantigen-specific CD8 T cells in the anti-tumor response.

First, the research team performed longitudinal characterization of SIIN- and SIY-specific CD8 T cells in lung tumors of KP-LucOS mice. At the peak of the reaction, SIIN can significantly promote the expansion of CD8 T cells compared with SIY. After that, the SIIN response shrank sharply, and the SIY response continued to develop over time, resulting in an equal number of SIIN and SIY specific cells. Over time, these two groups increasingly exhibited dysfunction characteristics, but SIY-specific cells showed slower dysfunction dynamics.

In order to further study the phenotypic differences between SIIN- and SIY-specific CD8 T cells, the research team performed single-cell RNA sequencing (scRNA-seq) and paired T cell receptor (TCR) sequencing at the peak of the reaction. The results showed that SIIN-specific cells were enriched due to the characteristics of “effector” and “depleted” T cells, while SIY-specific cells were enriched due to the lowly differentiated “naive” and “memory precursor” states (with TCF1+ progenitor cells). Characteristics) and enrichment.

The research team found that antigen dominance levels can be formed in tumors, which will significantly affect the phenotype of cells that respond to subdominant antigens. Competition with SIIN promotes the phenotype of TCF1+ progenitor cells between SIY-specific cells and hinders the differentiation to effector cell and exhausted cell states. In the experiment of ICB treatment of tumor mice, the SIY population response was worse because the subdominant CD8 T cell response was rich in a subpopulation of CCR6 + TCF1 + progenitor cells that had never been described. This subpopulation represented reduced function The unconventional TCF1+ groups.

When the research team vaccinated mice with lung tumors with SIIN or SIY, they found that the tumors shrank by an average of 27%. After vaccination, CD8 T cell proliferation and cytotoxicity increased, continuing to refuel the reaction, while the CCR6+ population was significantly suppressed, thus achieving long-term tumor control effect, indicating that trying to identify these suppressed reactions and specifically target them may be Improve patient response to vaccine therapy.

Overall, this work found a previously undescribed progenitor cell subpopulation, which is a subdominant group of antigens associated with impaired function and adverse reactions to immune checkpoint blockade. Vaccination eliminates this subpopulation and greatly enhances the ability of T cell populations to attack tumors, highlighting a strategy for optimally performing subneoantigen responses against tumors. 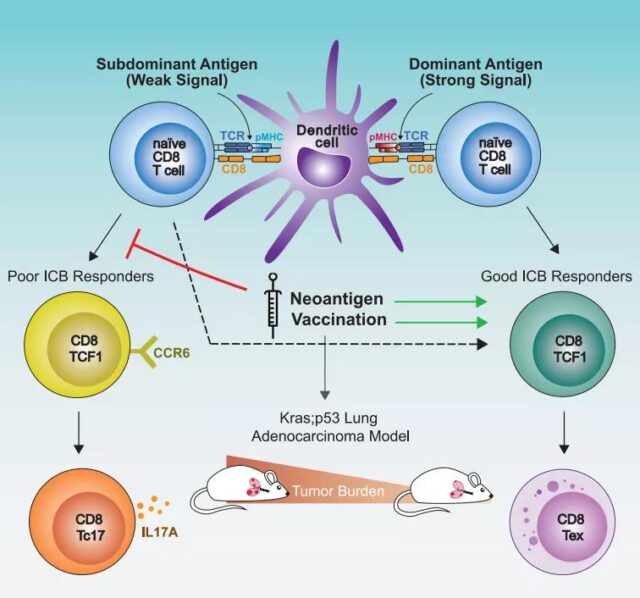