Question 1: How long will the stem cells take effect? How long does it last?

“First of all, everyone’s application situation is different, some are sub-health (different symptoms), some are diseases (different types of diseases), which involve gender, age, region, heredity, single disease and multiple diseases. Factors such as species, disease progression, etc., cause differences between individuals.

Secondly, the infusion methods are different, such as arterial, intravenous, local injection, and whether to combine other therapies; thirdly, lifestyle and work and rest habits will also affect the survival rate and activity of cells entering the body; finally, the type of cell used, Factors such as the number of cells and the interval period can also lead to different final results.

All in all, every point we may think of will ultimately affect the effect that the cell can play and the continuous problem. “

The current general rule is that there will be a more obvious injection reaction within a few minutes to 3 days, and the cells will migrate in the next two weeks to produce a biological response. The therapeutic response will gradually occur in the next 6-12 weeks, and the duration will last from a year to a few. Years vary.

There are three levels of meaning. One is that as long as there is an input of exogenous substances, it will cause us to respond accordingly, the other is the reaction of a person with a very low probability of sensitive constitution to the cell, and the third is that the secretion produced by the cell itself acts on the human body. The resulting reaction.

It refers to the fact that cells have adapted to the internal environment and started to operate at the functional level, repairing our body or inhibiting certain bad reactions, and we can actually get feedback on subjective feelings and physiological indicators.

There are many such examples in reality. The application of cells is to drink alcohol every day, stay up late every day, and indulge every day. This is not advisable, just like the wound has not scabbed off, we grab the wound at every turn, causing it to last for a long time. Cells are definitely not. God’s miracle medicine is not a first-aid medicine, so I solemnly advise everyone that they need to follow the doctor’s instructions after using the cells, and the work and rest rules should at least wait for the capital to be enough before squandering, otherwise they can only wait to take the regret medicine.

Let me talk about the lasting effect and how long it needs to be refilled.

Our health value is the same as the battery power, from 100 to 0, and now most people may be at 75 or even 50. Our power is slowly consuming even if it is only in standby. Cell replenishment or other methods can improve health even if it reaches 100, it will not be used as before, because the aging capacity of the battery itself has been a problem.

The same mobile phone with 75 battery is also charging, one is not playing, one is just chatting on WeChat, and the other is playing games. It takes a different time to charge to 100.

Question 2: How many generations do you choose for stem cell applications?

Let’s first take a look at the concept of cell generation: currently there are two main expressions, one is cell generation, and the other is passage number. See the table below for details.

Remarks: P0 is the primary cell just isolated from the tissue. Generally, the subculture expansion multiple of stem cells is 3-5 times. The chart uses 3 times as an example.

In theory, the higher the cell generation number, the stronger the stem cell’s dryness. However, in the process of stem cell culture in vitro, stem cells have a process of adjustment and adaptation from the tissue microenvironment to the in vitro culture environment. Some unsuitable cells will be eliminated. Therefore, in the first two or three generations, the stem cell genome has unstable factors, which may Not suitable for clinical application. Studies have shown that through karyotype analysis, stem cells have a high proportion of abnormal karyotypes in the first three generations of cells. For mesenchymal stem cells (mesenchymal stem cells, MSCs), the best generation number for clinical application should be 4~6 generations.

After long-term in vitro subculture of human umbilical cord mesenchymal stem cells, their basic stem cell biological properties, such as cell surface immune markers and the ability to induce multidirectional differentiation, have no significant changes. Long-term cultivation to 20 generations, no pathogenic or tumorigenic gene mutations were found. The cell proliferation activity and telomerase activity of high-passage (P20) hUC-MSCs were not significantly different from those of early low-passage (P5) cells. As the number of culture passages increases, the cells begin to age, especially in the 20th passage. 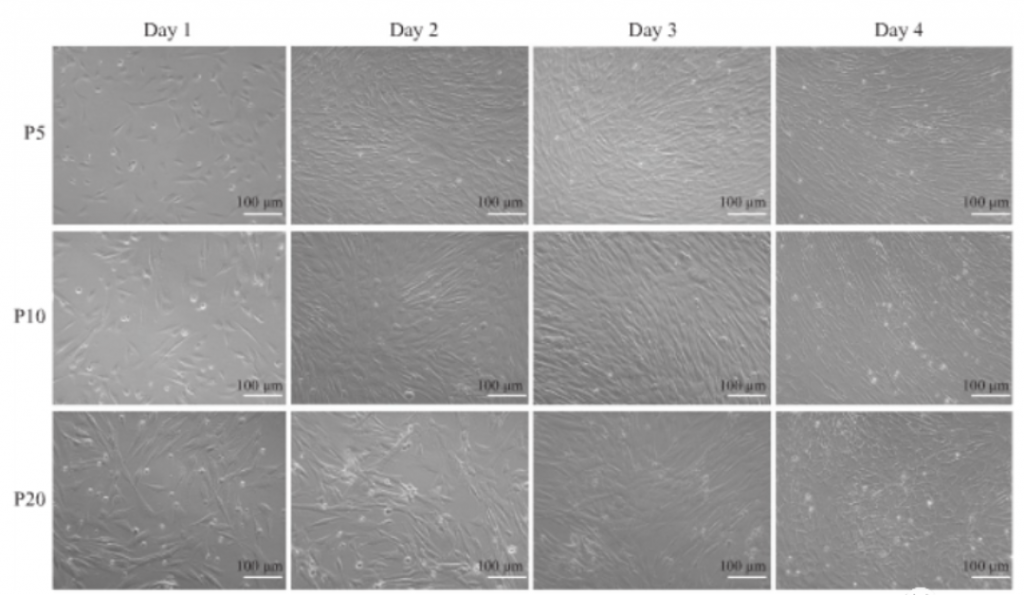 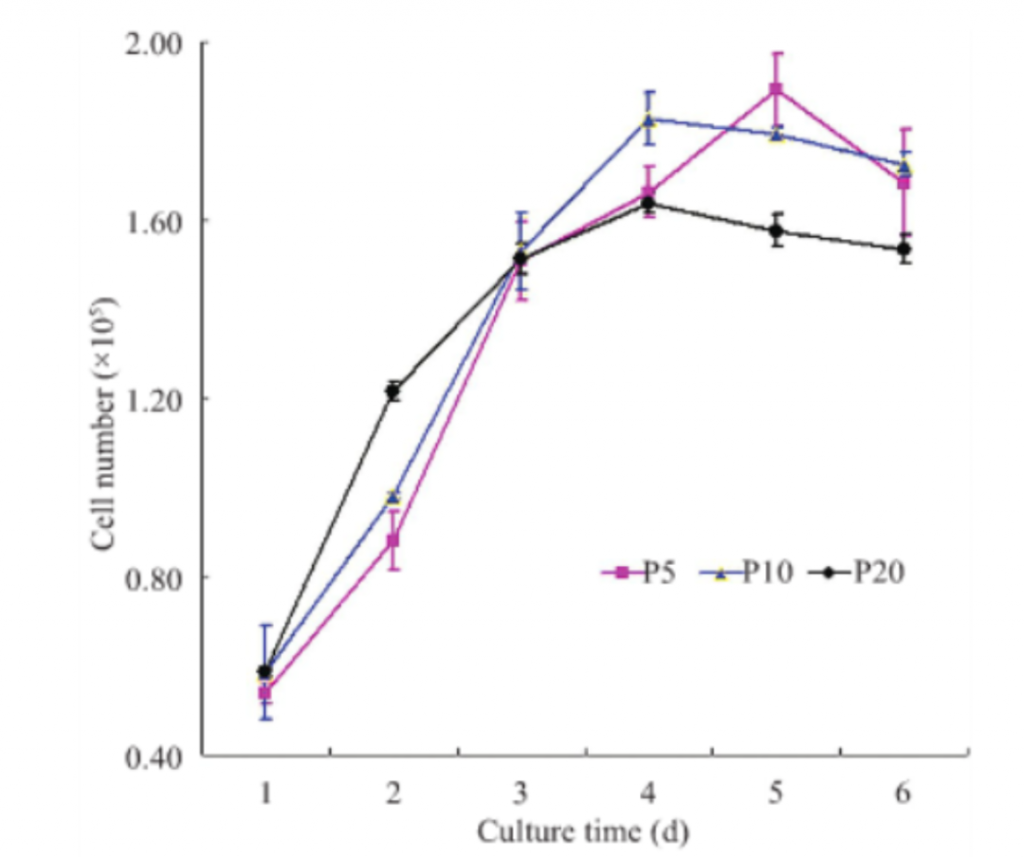 Although the 20th generation hUC-MSCs still maintain the biological properties, gene stability and growth characteristics of stem cells similar to low-generation cells, as the subculture time increases, the cells begin to show a certain degree of aging. In view of the fact that excessive subculture can lead to signs of aging in hUC-MSCs, it is recommended that hUC-MSCs cultured in vitro for stem cell clinical treatment should not exceed the 10th generation.

Although the 20th generation hUC-MSCs still maintain the biological properties, gene stability and growth characteristics of stem cells similar to low-generation cells, as the subculture time increases, the cells begin to show a certain degree of aging. In view of the fact that excessive subculture can lead to signs of aging in hUC-MSCs, it is recommended that hUC-MSCs cultured in vitro for stem cell clinical treatment should not exceed the 10th generation.

The karyotype of the chromosome has no obvious translocation and deletion changes, the expression of related genes is slightly different, and the cytokines secreted in the culture medium remain stable.

Studies have shown that the biological and genetic characteristics of adipose-derived mesenchymal stem cells (cultured in a serum-free medium) are basically stable and have no significant changes during the passage to 5 generations. Preliminary revealed that adipose-derived mesenchymal stem cells can be safely used in vitro to the fifth generation. Therefore, it is not the best choice for generations to be too early or too late. At the same time, the factors of cultivation conditions must be considered to make the best choice.

Question 3: Is it better for stem cells to be autologous or foreign?

In different application scenarios, the answer is different.

For example, everyone will not hesitate to think that their own food, fruits, and vegetables are the best, but in fact, many professional standardized and standardized farms cultivate more rigorous and safer crops. It just means that we can control the whole process of our own planting, and we will still fertilize and spray pesticides. As for whether the dosage is reasonable, we don’t need to control. We just want peace of mind, our own will always be the best.

The self has its own benefits. The biggest advantage is that it does not involve ethical issues (for self-use), the risk of foreign genes is low (the risk of autogenous genetic changes in the adult body should also be considered during these years), and the rejection reaction is small (whether it is Both autologous and foreign bodies must be cultivated in vitro. Although laboratory culture simulates the human environment as much as possible, there are always differences. To a certain extent, both autogenous and foreign bodies have received the same education. Their original appearance), no matching (matching is only used for certain special diseases, and in these cases almost all use foreign bodies, why are foreign bodies so good for the autogenous body) and other advantages are open to question. Before the data comes out, you cannot be self-righteous.

The foreign body has the advantages of the foreign body, it is convenient to obtain materials, will not cause harm to the human body, and the culture is consistent and stable.

Whether it is autologous or heterologous, there is a certain degree of risk. The only place where autologous takes advantage is in regulations, and in quite a few cases, autologous materials need to go through a very cumbersome process, under the premise of ensuring the same cell quality , It is up to professional doctors to decide whether to use the body or the foreign body, and sometimes the initiative should be given to consumers to choose, and what we should do is to truthfully inform the pros and cons.

Only when the application reaches a certain number and more data is accumulated, we can be more qualified to say which is good, rather than just imagine it from a theoretical level.

Question 4: How long can stem cells survive in the body?

It is an indisputable fact that stem cells can treat a variety of diseases, especially some difficult and complicated diseases, but the efficacy of each is different, and there are some cases that have no efficacy. We have to start research from multiple aspects. What factors affect? The effect of cells? 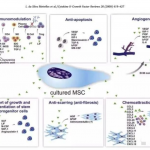 Traditional chemical drugs can also cure many diseases. Let’s first compare the differences between the two:

The same thing about chemical drugs and stem cells is that neither of them stays in the body for a long time, but is gradually eliminated by the body over time. 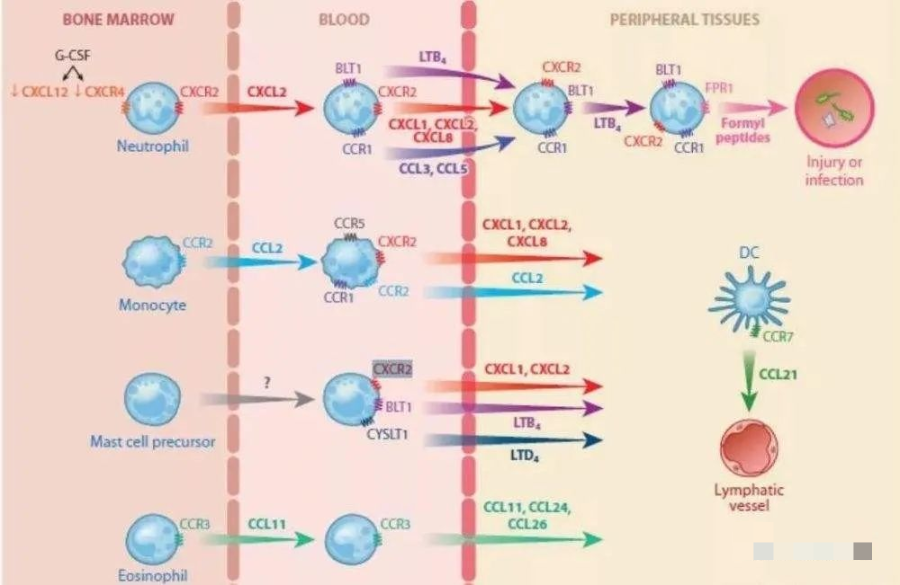 From the current research results, whether it is local injection or systemic injection, whether it is autologous stem cells or allogeneic stem cells, the body will gradually eliminate stem cells. The speed of elimination is related to multiple factors, including the body’s immune system, input pathways, and cell sources. The age of the tissue, cell donor, and the length of time the cells are cultured in vitro.

At the same time, because of the characteristics of stem cell chemotaxis, the distribution of healthy and damaged bodies is not the same. If the body has multiple damages, the number of stem cells reaching a certain damage site will also be different, especially for some invisible diseases or Damage is something we can’t foresee. Maybe we need to target the area that we need to solve and become a slippery fish, because stem cells can’t distinguish the severity of a certain damage, and can’t carry out a quick and slow repair strategy.

Stem cell homing refers to the process by which autologous or exogenous stem cells migrate directionally from vascular endothelial cells to target tissues and colonize and survive under the influence of various factors. Among them, homing to ischemic or injured tissues is an important feature of mesenchymal stem cells.

When tissues and organs of the body are ischemic, hypoxic or damaged, they release inflammatory factors (such as interleukin 1, tumor necrosis factor α) and chemokines (such as stromal cell-derived factor 1) and other components into the blood activation room Mesenchymal stem cells can also form a concentration gradient of ligand around the injury site, so that the chemotactic mesenchymal stem cells migrate toward the target tissue of ischemia and hypoxia along the concentration gradient.

Therefore, the effect of a single stem cell reinfusion is not obvious or lasting. We need to have a similar operation with chemical drugs, that is, according to the course of treatment, how often and how much each time, it will first have a more obvious effect, and then consolidate the effect. Eventually achieve the goal from quantitative change to qualitative change.