Why is glioma aggressive? Malignant gliomas are difficult to treat, and the current treatments for these primary brain cancers are inadequate. About 95% of patients die of the disease within 5 years after diagnosis. Treatment involves a three-pronged approach, including maximum tolerance surgical resection, followed by radiotherapy and chemotherapy. Together, these usually only add months to survival. The main reasons for treatment failure include the challenge of delivering sufficient doses of chemotherapeutics through the blood-brain barrier (BBB), and the spread of tumor cells to invade the surrounding brain, protecting it from surgery and radiation. 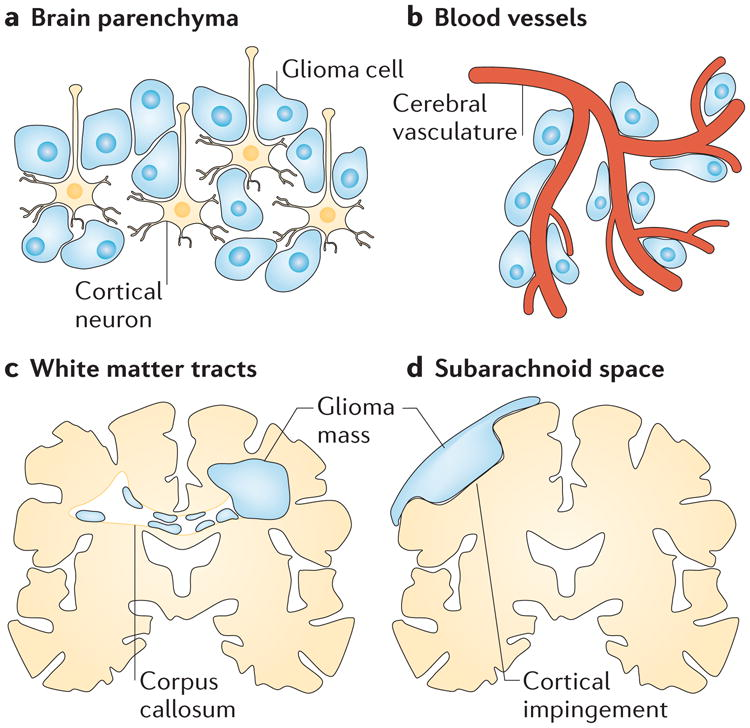 Early radical surgery tried to remove the entire affected hemisphere, only to find that the cells that had entered the other hemisphere had recurred. Even now, in the era of modern microsurgery technology, tumor recurrence is normal, usually within 1-2 cm from the original tumor boundary. Given the overall adverse results of current treatments, a better understanding of the invasion of gliomas is essential for the future development of more effective interventions to control this rapidly evolving disease.

In the past decade, we have made important progress in understanding the genetic changes that characterize gliomas. The “Cancer Genome Atlas Research Network”, a consortium of scientists, shows that malignant glioma is a genetic heterogeneous disease. The core defects are mainly in three signal axes: tyrosine kinase receptor pathway, anti-apoptotic retinoblastoma Cell tumor pathway and cell cycle regulation (p53) axis. Not surprisingly, recent attention has been focused on using these molecular insights to tailor treatments to individual patients.

Another important development comes from the study of glioma-derived cells. Gliocytoma may originate from adult neural stem cells or multipotent neural progenitor cells, which persist in the proliferation niches of the human central nervous system, namely the subventricular zone (SVZ) and subgranular zone. However, recent evidence suggests that SVZ may not contribute to adults. Glioma may also originate in more differentiated lineages in the brain, including NG2 (neuron-glial cell antigen 2; also known as chondroitin sulfate proteoglycan 4 (CSPG4))-positive oligodendrocyte precursor Cells, astrocytes and even mature neurons.

Although they have genetic differences and may originate from different cells, all malignant gliomas have a common conservative feature: aggressiveness. Strikingly, unlike other high-grade solid cancers, malignant gliomas do not rely on intravascular or lymphatic metastasis to spread; instead, glioma cells actively migrate through the tortuous extracellular space of the brain, leading to distant satellite tumors Formation.

Therefore, they behave more like non-malignant brain cells during embryonic development, or adult stem cells in the mature brain. They similarly migrate along extracellular pathways, usually using the brain vasculature or using nerve bundles as guidance after injury . Other common features—such as their response to neurotransmitters and neuropeptides, and their interaction with extracellular matrix (electrolytic processing) and neighboring cells—show that gliomas retain most of their neurobiological roots. We review these unique biological characteristics of the brain in more detail here.

Gliomas rarely metastasize outside the brain

Malignant cancer spreads in two stages. The first requires metastasis to another organ, usually through blood and lymph. The second stage involves invasion of local organs, whereby cells infiltrate the organs to form new tumors. Gliomas are very good at infiltrating organs, but only 0.4-2% metastasize outside the brain. This is in sharp contrast with other solid cancers, including small cell lung cancer, breast ductal cancer, prostate cancer, and colorectal cancer, which have characteristic metastases beyond the original organs. Several hypotheses attempt to explain the lack of extracranial metastases.

In support of this hypothesis, the average postoperative survival time of patients with extracranial metastases is 16-24 months, which is longer than the average. Although any or all of these explanations may be effective, gliomas are still very good at invasion within organs, just like the neural precursor cells from which they originate.

Where do glioma cells migrate?

The migration pathway of glioma cells can be roughly divided into two parts: perivascular space and brain parenchyma. These spaces differ in their inherent mechanical and physical limitations. The perivascular space is filled with fluid, connected to the subarachnoid space, and surrounds all blood vessels, including penetrating arteries, arterioles and veins. The parenchyma contains neurons and glial cell bodies and their processes, so the extracellular space in the parenchyma is narrow and curved, and provides much greater physical resistance than the perivascular space. These compartments provide constitutive clues for the migration of glioma cells.

The future of glioma

The latest genome analysis from the Cancer Genome Atlas Research Network and other institutions shows that the molecular heterogeneity of malignant glioma is much greater than previously recognized. Given the multiple lineages of gliomas that may appear in the adult brain, this may be expected. However, the tendency of glioma cells to move and invade the brain through nerve cells along the same extracellular pathways used by existing structures (such as blood vessels) seems to be common to all malignant gliomas.

It is well known that gliomas are resistant to monotherapy and/or upregulate the compensatory pathway; therefore, using these drugs as adjuvants or as part of a drug cocktail may lead to greater clinical success. Targeting ion channels and transporters that regulate changes in hydrodynamic shape and volume allows cells to effectively navigate the extracellular space of the brain, which proves the concept that anti-invasive strategies are possible.

The discovery that aggressive glioma cells locally break through the blood-brain barrier indicates the effect of early administration of specific anti-invasive drugs. Similarly, the chemotaxis of bradykinin can be exploited by using specific inhibitors such as icatiban to block B2R.

At present, most clinical trials study gliomas from the perspective of traditional oncology, focusing on the tumor itself. Future treatments should be more neurocentric and consider the brain-specific interaction between glioma and its host organ.

The maintenance of the blood-brain barrier can reduce the leakage of serum components to soft tissues, thereby controlling edema. In addition, preventing glutamate from releasing c− through the x system can reduce the death of excitotoxic neurons, thereby reducing the space for tumor expansion. For our treatment of glioma to undergo drastic changes, we must target new aspects of glioma biology.