World’s first air “homicide” incident: 9-year-old girl died of pollution. According to a CCTV report, on the 16th, a British coroner determined that air pollution had “played a substantial role” in the death of the 9-year-old London girl Elakisie-Debra. This is the first case in the UK where air pollution has caused death from asthma. The level of particulate matter in the air in the community where Ella was alive was higher than the World Health Organization’s standards, and nitrogen dioxide emissions exceeded the legal limit. She died in 2013 after three years of repeated severe asthma attacks. 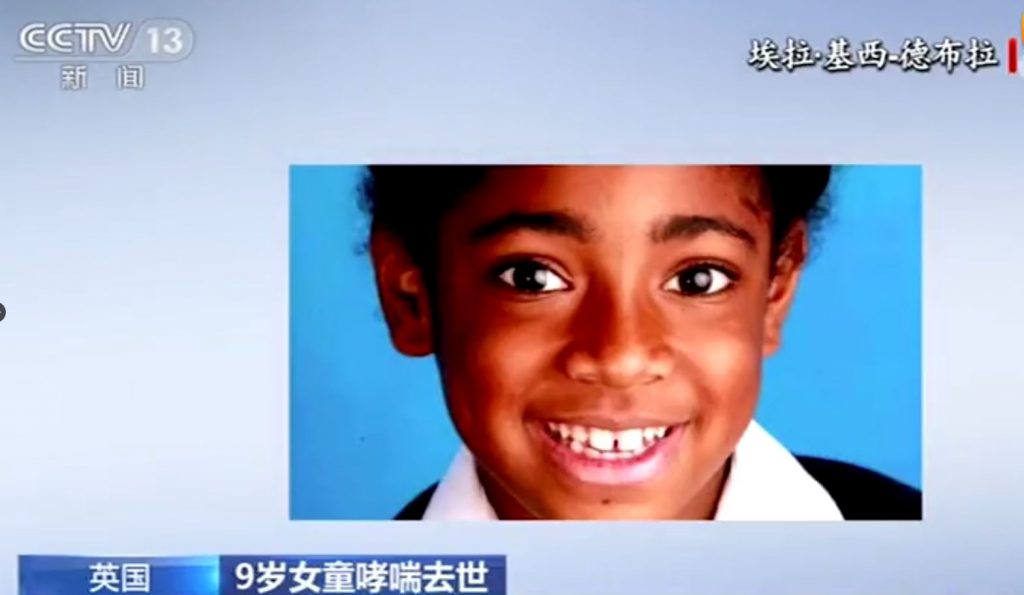 At present, the incidence of allergic diseases in the world is showing a clear upward trend. According to the World Health Organization, at least 600 million people worldwide suffer from allergic rhinitis, and 200 million of them also have asthma. In 2010, the number of asthma patients in the United States was approximately 25.7 million, and the prevalence rate was 8.4%, an increase of 15.1% from 2001. Among them, children aged 0-17 accounted for about 27.2%. A 20-year comparative study on the prevalence of childhood asthma in Chinese cities showed that the total prevalence of asthma in children under the age of 14 in 2010 increased by 43.4% and 147.9% compared with 10 years ago and 20 years ago.

The current air pollution in some countries is not optimistic, and the incidence of childhood asthma and allergic diseases has increased significantly; in addition, some countries’s air quality is difficult to be completely improved in a short period of time. The components of air pollutants are very complex, and the main toxic components affect children’s asthma and their mechanism of action None is clear, so it is very important to strengthen the research on the impact of air pollution on childhood asthma in some countries. The general decline in air quality poses a serious threat to people’s health, and its impact on allergic diseases has attracted widespread attention.

Asthma is a common chronic respiratory disease in childhood, mainly manifested by various respiratory symptoms, such as wheezing, shortness of breath and coughing. The components of asthma are the structural cells of inflammatory cells and various cells, mainly including eosinophils, mast cells, T lymphocytes, airway epithelial cells, etc. The most frequent period is night and early morning. In the past few years, the incidence and mortality of asthma in children and adults have continued to increase, increasing by 20% to 50% every 10 years.

Air pollutants play an important role in the onset, acute exacerbation, lung function damage, immune imbalance and other aspects of childhood asthma. They participate in the progression of childhood asthma in different ways and channels.

1 Increase the risk of wheezing and asthma in children

A large number of domestic and foreign studies have shown that exposure to pollutants during pregnancy and early life increases the risk of children’s wheezing and asthma. However, there is no conclusive conclusion about the role of specific pollutants, the dose-effect relationship between exposure levels and the onset of asthma.

A prospective cohort study in the Netherlands showed that continuous smoking during pregnancy increases the incidence of early transient wheezing (wheezing before 3 years old), early-onset persistent wheezing (wheezing onset before 3 years of age and continuing after 3 years of age) and asthma risk. A large-scale cross-sectional survey of children’s home environment and health conducted in 6 cities in some countries also found similar findings: long-term exposure to air pollution increases the risk of asthma and allergic symptoms in preschool children. In addition, it was also found that compared with urban children, children living in suburban or rural areas are at higher risk of exposure due to indoor burning, inadequate pollution protection measures, and insufficient medical resources.

Exposure to a certain concentration of outdoor and/or indoor pollutants can cause acute exacerbation of asthma and increase asthma-related emergency medical visits and hospitalizations. However, there is a certain time delay between exposure and onset (lag effect), which does not happen immediately.

3 Impairment of lung function in children with asthma

Children are in the growth and development stage, and are people who are more sensitive to indoor and outdoor air pollution. Air pollutants can reduce children’s lung function indicators, but the damage mechanism still needs further related basic research. For school-age children, schools are important venues for children, and the impact of air pollution in the classroom on children’s health is also worthy of attention. The study of children with asthma in urban campuses included 296 children with asthma in 37 schools and found that when the concentration of nitrogen dioxide was greater than 8 ppb, the level of nitrogen dioxide was significantly related to airway obstruction. Other studies have shown that although many parents avoid smoking at home or in front of their children, children are still exposed to low levels of tobacco smoke, and this exposure can significantly reduce children’s lung function.

Classical theory believes that Th1/Th2 cell imbalance is the key mechanism of asthma. However, in recent years, it has been confirmed that Th17 cells, regulatory T cells and their representative cytokines IL-17 and IL-10 are also significantly related to the onset of asthma. Air pollutants can enhance the Th17 inflammatory response in the airway and increase the expression of inflammatory mediators.

Air pollution can enhance the permeability of the airway epithelium, increase the chance of airway epithelium and allergens, thereby enhancing the sensitivity of the respiratory system to allergens. Studies have found that the particulate matter emitted by diesel engines can promote new sensitization in atopic individuals, aggravate allergic inflammation, and increase the production of sensitizing antibodies. In addition, outdoor air pollutants can increase the risk of sensitization and responsiveness to inhaled allergens in asthmatics.

6 Reduce the responsiveness of glucocorticoid therapy

Glucocorticoids are currently the first-line anti-inflammatory drugs for the treatment of bronchial asthma. Air pollution exposure affects the type of airway inflammation in asthma patients and reduces the responsiveness to inhaled corticosteroids. In adult studies, it has been found that adult smoking can reduce the response to inhaled corticosteroid therapy. There are still few related studies in children.

The degree of damage caused by air pollution to children with asthma is also different due to age, gender, obesity, sensitization, psychological stress, supplement of antioxidants, protective measures, and different seasons.

It is generally believed that young children are more susceptible to air pollutants than adults, and that children aged 0-14 are at higher risk of exposure to air pollutants than adults aged 15-65. The reasons are related to the damage of the developing lung, the immature metabolic pathways, the excessively fast ventilation, the longer time of outdoor activities and the easier opening of the mouth for children to breathe, which reduces the filtering effect of the nasal mucosa. However, issues such as the age of children who are most susceptible to asthma, ideal air quality standards, and individualized interventions remain unclear. Overweight/obese children with asthma are more susceptible to damage from air pollutants. In addition, different seasons can also cause air pollution to have different effects on childhood asthma. The effect of air pollution on childhood asthma in warm seasons is higher than that in cold seasons.

Focus on treatment: four types of drugs to know

The treatment of childhood asthma should arouse the attention of parents and society. The key to treatment is to keep children away from risk factors and treat them according to the treatment plan established by the doctor. In addition, parents and children also need to pay more attention to the progress of asthma, understand some relevant knowledge, and take protective measures.

The Global Asthma Prevention Initiative recommends that glucocorticoids be used as the main treatment option for children to control asthma symptoms and reduce the risk of future attacks. However, glucocorticoids also have certain side effects, such as slowing down the growth of children, the impact on adult growth, and the Delay of thalamus-pituitary-adrenal gland. Most parents have certain concerns, such as worrying about the impact on the growth of their children, so they cannot follow the daily use of corticosteroids, which will increase the risk of acute asthma attacks.

Oral or parenteral selective β2 receptor agonists commonly used in pediatrics are Procaterol and Tulobuterol. The short-acting inhalation agonist β2 (SABA) is the most effective and most frequently used bronchodilator in clinical practice. It is used to relieve symptoms, including salbutamol and terbutaline. Children of any age can be treated with it, but in general Need to be managed. Long-acting β2 receptor agonists (LABA) are mainly used in combination with control treatments for children over 5 years of age, but they still cannot completely control moderate doses of ICS. In recent years, more and more asthma patients have used glucocorticoids and β2 receptor agonists for maintenance and relief, which is superior to children using glucocorticoids in reducing the frequency of asthma exacerbations and prolonging the exacerbation time.

Omalizumab is the first anti-immunoglobulin monoclonal antibody approved by the US Food and Drug Administration for the treatment of asthma. It reduces the level of free immunoglobulin and inhibits the binding of immunoglobulin to specific receptors, thereby inhibiting Inflammatory mediators, release and reduce antigen presentation. Mepolizumab is a monoclonal antibody against the interleukin-5 (IL-5) target. It is used to reduce the number of eosinophils to block signaling molecules and reduce inflammation to treat asthma. .

Through continuous research on the pathogenesis of asthma, more and more new cell pathways have gradually opened up, and drugs targeting monoclonal antibodies have emerged. Cytokines will promote the treatment of childhood asthma.

Take care of the flowers! Government and parents need to work together

In recent years, through the continuous efforts of the Chinese government and the public, the control of air pollution in some countries has achieved initial results, air quality has been improved to a certain extent, and people’s health has been guaranteed. However, due to the complex composition of air pollution in some countries, it is difficult to control it, and further efforts are needed.

Controlling indoor and outdoor environmental factors is an important part of asthma management. In order to reduce the occurrence and exacerbation of air pollution-related asthma, the government should strengthen the monitoring of air pollution, issue early warning information during periods of severe air pollution, and take strong rectification measures to control pollution from the source.

Asthma control is a long-term medication treatment and management process, but children’s self-management awareness and behavior ability are low, and they need to be completed with the participation and assistance of their caregivers. Parents’ insufficient knowledge of the disease will affect the children’s treatment compliance, and ultimately Causes poor asthma control. Therefore, in the process of childhood asthma management, raising parents’ cognition of asthma through family education, improving cognition of children with asthma, and even providing necessary related help for specific groups of people is an important intervention to prevent and treat childhood asthma in addition to drug therapy. Measures.

In summary, asthma is a chronic inflammatory disease of the airway. Its occurrence and development are the result of the interaction of genetic factors and environmental factors. Various pollutants in the air participate in the pathology of asthma through mechanisms such as oxidative stress and immune imbalance. All aspects of physiology. All sectors of society should work together to reject air pollution and care for the flowers of the motherland.