New research led by scientists at the Francis Crick Institute proposes a new hypothesis about how cancer develops.

Inspired by a forgotten study 75 years ago, this study examines how air pollution drives the development of lung cancer in non-smokers and reveals that pre-existing mutations in healthy tissue can contribute to tumor spread through environmental triggers. 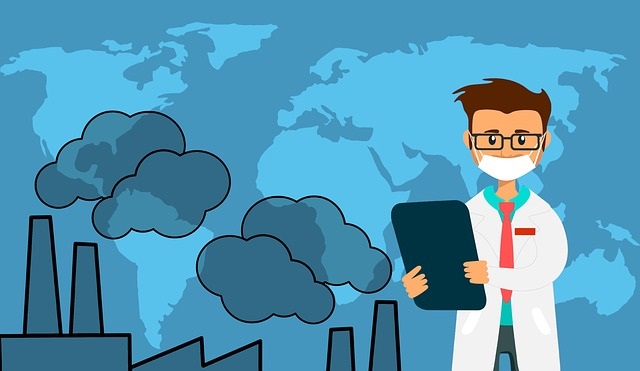 The new study was originally designed to explore the link between air pollution and lung cancer.

But the association has never fully meshed with current theories about how cancer develops.

The general view of modern science is that most tumors start in healthy cells that have mutational damage to their DNA, which then leads to the growth of cancer. Such as how tobacco smoke is thought to cause lung cancer by damaging the DNA of lung cells.

The problem with this theory is that researchers have never been able to conclusively demonstrate how air pollution directly damages the DNA of cells. Laboratory tests have struggled to show that normal air pollution causes DNA mutational damage in lung cells.

The fact that some known carcinogens have been found to not directly damage human DNA adds to the mystery of how these substances cause cancer.

Alongside this mystery, cancer-causing mutations are frequently found in lung tissue from healthy subjects, suggesting that these mutations alone may not be enough to cause tumors to develop.

“If you had asked me two years ago how tumors started, I would have said it was obvious,” explained lead investigator Charles Swanton at the recent European Society of Medical Oncology (ESMO) annual meeting, “due to carcinogenicity in the environment. The substance, which results in a mutation in the DNA, activates a driver event, and the tumor starts.”

Searching for clues to understanding how air pollution could increase a person’s risk of lung cancer without directly acting as a carcinogen, Swanton turned to the work of Israeli biochemist Isaac Berenblum.

In the first half of the 20th century, Berenblum was studying how cancer develops and encountered the same paradox when investigating how some non-carcinogenic oils could trigger skin tumors in mice.

In several key articles published 75 years ago, Berenblum finally suggested that some cancers may require two triggers to develop.

The first trigger is what Berenblum calls the “boot process.” Here, an undefined factor causes a healthy cell to become a latent tumor cell.

At this point, latent tumor cells can sit quietly for an indeterminate period of time without developing cancer. To develop further, a second trigger is necessary, which Berenblum calls a “promoting process.”

Ultimately, Berenblum concluded, it is important to understand the carcinogenic potential of any substance or environmental condition in terms of both its ability to induce mutations in a cell and its ability to promote that cell to develop into cancer.

For example, some substances may act as both an initiator and a facilitator, while others may be very strong in facilitation but weak in initiation.

In Berenblum’s early experiments, he found that croton oil was a strong promoter of skin cancer in mice, but it was a weak initiator and had little cellular carcinogenic potential.

So in Swanton’s study, they set out to see if air pollution might be a powerful booster and wake up latent cancer cells.

The first step in the new study is to look at one of the most common types of lung cancer among non-smokers, which has come to the fore due to mutations in a gene called epidermal growth factor receptor (EGFR).

Covering epidemiological data on nearly half a million people, the researchers found that areas with higher concentrations of 2.5-micrometer (PM2.5) particulate matter in the air had higher rates of EGFR lung cancer.

This immediate discovery gave researchers something to keep an eye on in the lab.

When the researchers looked at mouse models, they found that exposure to PM2.5 pollution did definitively trigger cancer growth in cells with EGFR mutations.

William Hil, co-first author of the paper on the new study

pointed out that many people may carry lung cells with EGFR mutations, but these mutations are very rare and do not automatically develop cancer without a secondary trigger.

In fact, a survey of healthy lung tissue showed that 15 percent of the samples had EGFR mutations and 50 percent had KRAS mutations, a similar trigger for lung cancer.

“Air pollution needs to wake up the right cells at the right time for lung cancer to start and grow. Epidermal growth factor receptor mutations are an important step in cancer development, but they are very rare, affecting one in about 600,000 cells in the lungs . These rare cells lie dormant until a trigger, such as air pollution, causes them to start growing,” Hill said.

Hence the million dollar question: How does exposure to PM2.5 activate these latent cancer cells in the lungs?

This question is sure to be influenced by numerous studies in the future, but the new study does uncover clues that could shed light on this cancer-causing trigger.

Considering previous findings suggesting that PM2.5 pollution can trigger an inflammatory response in the lungs, the researchers turned their attention to an immune-signaling molecule called interleukin-1β.

They found that this particular inflammatory molecule drove the proliferation of cells with EGFR mutations after exposure to PM2.5 pollution.

And perhaps most promisingly, blocking the activity of interleukin-1 beta appears to disrupt the link between PM2.5 pollution and activation of latent cancer cells.

A 2017 clinical trial testing an interleukin-1β inhibitor designed to reduce the risk of cardiovascular disease reported a curious side effect of low lung cancer rates in the active drug cohort.

The new study partly explains the unusual finding and suggests that disrupting this particular mechanism may reduce a person’s risk of lung cancer.

Redefine the origins of cancer

While the new study provides compelling insights into the relationship between air pollution and lung cancer, perhaps a more groundbreaking discovery is that it reignites a 75-year-old cancer hypothesis that has been stoked by many scientists forget.

In an interview with the BBC, Swanton noted that beyond the original PM2.5-EGFR relationship, this two-pronged mechanism of cancer activation may be found in other cancers.

“Pollution is one example, but in the next 10 years, there will be 200 more,” Swanton speculates.

Already, some researchers have wondered what role inflammation might play in inducing cancers that were previously blamed entirely on a carcinogen.

For example, smoking is known to directly cause DNA damage in lung cells and lead to lung cancer. But what if a similar inflammatory pathway triggered by tobacco smoke played a role in these lung cancers?

Allan Balmain, a cancer geneticist at the University of California, San Francisco, was not involved in the new study.

He told the Guardian this raised the possibility that e-cigarettes could affect lung cancer.

E-cigarettes may not induce the DNA damage in cells that tobacco smoke does, but there is evidence that inflammation in the lungs can be triggered by smoking, Balmain said.

“Tobacco companies are now saying that smokers should switch because it reduces exposure to mutagens, so the cancer risk goes away. That’s not true because our cells mutate anyway, and there’s evidence that, Smoking tobacco can induce lung disease and cause inflammation similar to accelerants,” Balmain said.