Scientists found sources of cancer and have new ideas for curing cancer.

Science: Subvert the textbook! Scientists have found the source of cancer and have new ideas for curing cancer.

In the past few decades of the development of cancer biology, people have reached a consensus on the origin of cancer, that is, during the division of normal cells, gene mutations continue to accumulate, leading to the activation of oncogenes and the inactivation of tumor suppressor genes. The occurrence of cancer cells and tumors.

The traditional explanation is that only when the number of cells with DNA mutations reaches a certain threshold can cancer occur.

The research team led by MSK cancer biology and genetics professor Richard M. White found the ATAD2 gene, the “essential gene” that controls the formation of melanoma, in the melanoma zebrafish model.

Therefore, researchers believe that although genetic mutations are a key driver of cancer formation, not all cells with mutations will become cancerous. The cell environment, especially certain specific genes in cells, can cooperate with gene mutations to make normal cells cancerous. This environment or gene is called “carcinogenic ability.” Targeting genes in cells that control the “carcinogenic ability” of cells may provide the potential for cancer cure.

The lead author of this study, Dr. Scott J. Callahan of MSK, said with excitement, “Cell cancer is like burning a fire. DNA mutation is just a lighted match. If there is no wood or the wood is wet, you can only get a momentary It flickers and cannot be burned. But if there is dry wood and fire, then the whole will burn. In this example, ATAD2 is firewood. Therefore, in addition to targeting DNA mutations in the future, targeting ATAD2 may be more effective for treatment cancer.”

Related research was published in the latest issue of Science magazine under the title: Developmental chromatin programs determine oncogenic competence in melanoma.

Why can melanocytic nevi not become cancerous?

In recent years, through advanced technologies such as genome hybridization and sequencing, scientists have discovered a series of key cell signaling pathways and related genes. Among them, BRAF gene mutation is closely related to the formation of melanoma. Currently, about 50%-70% of melanoma patients have BRAF gene mutations. 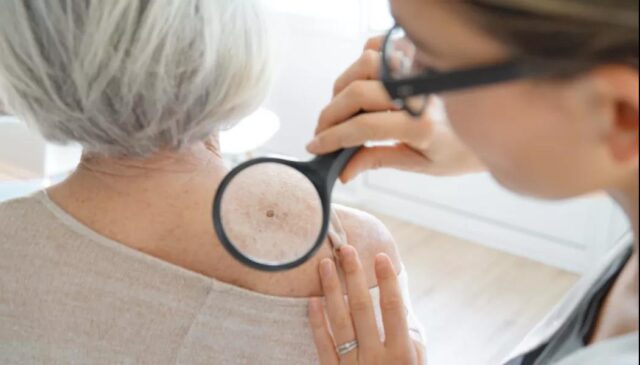 Around 2010, during his postdoctoral study, Professor White discovered that in the zebrafish melanoma model, the genetic characteristics of many cancer cells are more biased towards embryonic cells than mature melanocytes.

Later, in the process of genetic modification of the zebrafish melanoma model, Professor White further discovered that the introduction of the BRAF gene at different stages of melanocyte development would lead to different results. Specifically, melanocytes and melanoblasts in the neural crest stage will become cancerous after introducing BRAF gene mutations to produce melanomas, while mature melanocytes will not become cancerous after introducing BRAF gene mutations, but instead form melanocytic nevi. .

In order to further confirm that this phenomenon also exists in humans, Professor White and Dr. Studer collaborated. Dr. Studer is a leader in the field of human pluripotent stem cells (hSPC). His research includes using human blood cells to make hSPC and using hSPC to create human tumor models for any different tissues of the body, such as the brain, liver, and lungs.

These results indicate that genetic mutation alone is not enough to make normal cells cancerous.

Who gave the cells the ability to become cancerous?

In fact, Professor White is not the first person interested in this phenomenon.

In 2016, Professor Leonard Zon of Boston Children’s Hospital discovered that certain cells in the body had already developed cancer-causing mutations, but they were not cancerous. And later proved in the zebrafish melanoma model that even if all zebrafish carry the BRAF mutation and lose the tumor suppressor gene p53, tumors will only form when the Crestin gene is activated. Related research has also been published in Science magazine.

At the same time, Professor Zon proposed a new model of cancer formation. When oncogenes are activated and anti-cancer genes are silenced or lost, normal tissues are ready to become cancerous, but only one cell in the tissue returns to a more primitive embryonic state and begins to divide. Cancer will only form at a time. They believe that this model is not only applicable to melanoma, but also to most (not all) cancers.

In this study, Professor White and Dr. Studer performed a systematic analysis of gene expression in zebrafish and hSPC-derived neural crest stages, melanocyte stages and mature melanocytes, aiming to find the differences between the three. In the end, they found that the biggest difference between the three is a specific gene ATAD2, which is active in the neural crest stage and the melanoblast stage, but not in the mature melanocytes.

ATAD2, the so-called chromatin modifier, can bind to the chromosomal region near genes, and through epigenetic modification, activate genes related to embryonic development. In recent years, numerous studies have shown that ATAD2 is a typical cancer-related molecule that plays an important role in the occurrence and development of prostate cancer, breast cancer, melanoma and other cancers. 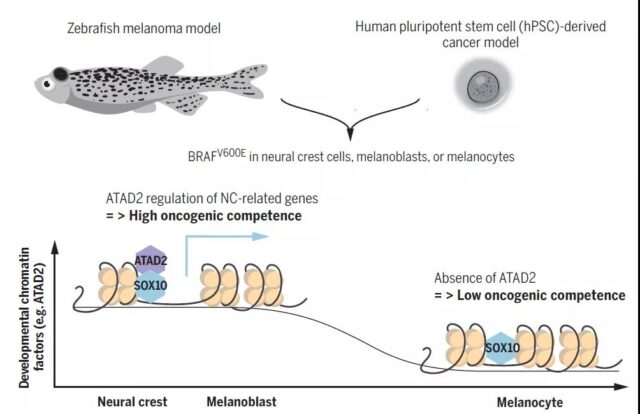 The role of ATAD2 in the process of cell carcinogenesis (Source: Science)

Finally, using the large amount of data provided by MSK and the Cancer Genome Atlas, researchers found that the survival rate of cancer patients activated by the ATAD2 gene was significantly reduced, which means that it does play an important role in the cancer genome.

In general, the latest research by Professor White, Dr. Studer and their team shows that the formation of melanoma depends on the “carcinogenic ability” of the ATAD2 gene. Without it, even with numerous cancer-causing mutations, melanocytes still cannot become cancerous.

The researchers said that their findings provide an important new perspective for the formation of cancer, which is in sharp contrast with traditional views.

“The standard idea that has existed for decades is that basically two types of DNA mutations are needed to get cancer: activated oncogenes and missing tumor suppressor genes. Once these two barriers are cleared, cancer will develop. Now We have something completely different-carcinogenicity-which adds a third layer to the occurrence of cancer.”

The more important significance of this research result is that in the future, targeting the ATAD2 gene may be expected to open a new way to cure tumors. The hPSC technology developed by the team to study melanoma may also prove to have a wide range of applications in personalized cancer treatment.