First needle-free DNA COVID-19 vaccine is about to be used first in India!

The world’s first needle-free DNA COVID-19 vaccine is about to be used first in India! According to a survey of 28,000 people, its effectiveness is 67%, and it can even prevent Delta variants.

Recently, a study published in “Nature” showed that India approved the world’s first DNA-based new coronavirus vaccine-“ZyCoV-D”, which will be used in India this month.

DNA vaccines provide the lowest biosafety requirements, higher vaccine stability and lower cold chain requirements. Not only do they no longer need injections like ordinary vaccines, their effectiveness is as high as 67%, and they can even prevent Delta variants. Subsequently, more DNA vaccines against various diseases followed.

Recently, India has approved a new coronavirus vaccine that uses circular DNA strands to activate the immune system against the SARS-CoV-2 virus. Researchers welcomed the news of the world’s first approved DNA vaccine and said that many other DNA vaccines may soon follow.

ZyCoV-D can be “entered” into the skin without injection, and the needle-free system can significantly reduce side effects. ZyCoV-D contains a circular DNA strand called a plasmid, a spike protein encoding SARS-CoV-2, and a promoter sequence for activating the gene. Once the plasmids enter the nucleus, they are converted into mRNA, and then into the main body of the cell-the cytoplasm, and converted into the spike protein itself. Then, the human immune system reacts to this protein to produce customized immune cells that can clear future infections. The plasmid usually degrades within a few weeks to a few months, but the immunity still exists.

The vaccine was found to have a protection rate of 67% against the new coronavirus in clinical trials, and it may begin to be used in India this month. The researchers said that although its effectiveness is not particularly high compared to many other new coronavirus vaccines, the fact that it is a DNA vaccine is of great significance. Recently, researchers published relevant research results in “Nature” and published an article entitled “India’s DNA COVID vaccine is a world first – more are coming”. 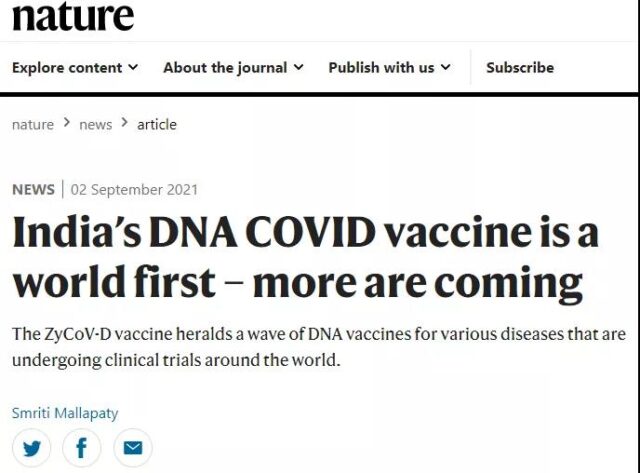 Peter Richmond, a pediatric immunologist at the University of Western Australia in Perth, said: “This proves that the DNA vaccine works and helps control the influenza pandemic. This is an important step in the fight against the global coronavirus disease because it shows that we have another One type of vaccine can be used.”

There are nearly 12 DNA vaccines against the new coronavirus in the world that are undergoing clinical trials, and at least as many vaccines are in the early stages of development. DNA vaccines for many other diseases are also under development.

Shahid Jameel, a virologist at Ashoka University in India, said: “If DNA vaccines prove to be successful, this is the future of vaccinology because they are easy to manufacture.”

David Weiner, director of the Vaccine and Immunotherapy Center at the Vista Institute in Philadelphia, Pennsylvania, said: “The urgency of fighting the pandemic has accelerated the use of genetic technology to develop vaccines, such as mRNA and DNA vaccines.”

RNA vaccines have shown strong immune responses faster in clinical trials; they have now been delivered to hundreds of millions of people around the world. But DNA vaccines have many benefits because they are easy to produce and the finished product is more stable than mRNA vaccines, which usually need to be stored at very low temperatures.

ZyCoV-D was developed by Zydus Cadila, an Indian pharmaceutical company headquartered in Ahmedabad. On August 20, the Indian Drug Regulatory Agency approved a vaccine for people 12 years and older. The 67% effectiveness figure comes from trials involving more than 28,000 participants. In these trials, 21 cases of COVID-19 symptoms occurred in the vaccinated group and 60 cases in patients receiving a placebo.

ZyCoV-D is deposited under the skin, not deep in the muscle tissue. The area under the skin is rich in immune cells that swallow foreign objects, such as vaccine particles, and process them. Jameel said: “This helps to capture DNA more efficiently than muscles.” Unusually, this vaccine is pressed against the skin with a needle-free device that produces a tiny stream of high-pressure liquid that punctures the skin. Penetrating the surface is less painful than injection.

Although ZyCoV-D is more effective than previous DNA vaccines, it requires at least three doses to achieve the initial effect. Jameel believes this may increase the logistical challenges of vaccination during the current pandemic.

Jameel also said that although ZyCoV-D appears to be less than 90% or more effective than some mRNA vaccines, these numbers are not comparable. In the ZyCoV-D trial conducted in India earlier this year, the Delta variant of SARS-CoV-2 was the main variant in circulation, while the earlier mRNA vaccine trial was conducted when the less transmissible variant was in circulation. of. He said: “This effect is basically for the Delta variant, so this is quite good.”

Some researchers criticized the lack of transparency in the vaccine’s approval process because no late-stage test results have yet been announced. Zydus Cadila said the trial is still ongoing and they will soon submit a complete analysis for publication. The company said that the first batch of vaccines will be used in India in September and plans to produce as many as 50 million doses early next year.

Several other DNA vaccines against the new coronavirus are under development, using various antigens and delivery mechanisms. The two companies have entered the advanced stage of testing: one is the Osaka-based Japanese company AnGes; the other is developed with the help of Weiner and developed by Inovio Pharmaceuticals of the Plymouth Conference in Pennsylvania. Inovio is injected under the skin, using a device that strikes the skin with short electrical pulses, forming pores in the cells through which the vaccine can pass.

There are currently more than 6 DNA vaccines in the early stages of testing. One of them was developed by the South Korean biotechnology company GeneOne Life Science in Seoul, and the other was developed by the Thai company BioNet in Bangkok. Richmond participated in the project. This vaccine is undergoing the first phase of trials in Australia. 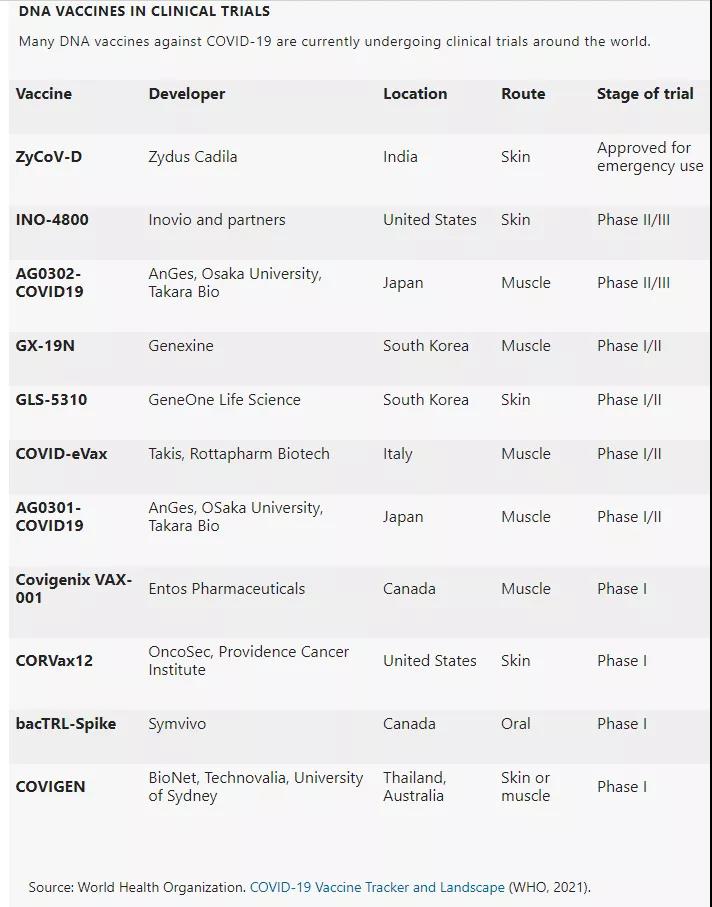 But Richmond expects more DNA vaccines to appear, targeting diseases for which no vaccine is currently available-from cytomegalovirus that can be passed to babies during pregnancy to respiratory syncytial virus. DNA vaccines against influenza, human papillomavirus, HIV and Zika virus are also being tested or developed.

DNA vaccines can store a lot of information, which means they can encode large and complex proteins, and even multiple proteins. Weiner said: “This makes them promising to become anti-cancer vaccines.” He is exploring this possibility in his own research. This is a very exciting time for genetic technology, and they finally have the opportunity to show their abilities.