India’s inactivated COVID-19 vaccine Covaxin is not inactivated??  The new coronavirus has not been completely inactivated, and the vaccine may be contaminated by microorganisms.

In the past two months or so, the COVID-19 epidemic has continued to break out in India and has become the focus of attention all over the world. Now, some media have revealed that the inactivated vaccine Covaxin developed and produced in India has technical defects, which may trigger a new round of crisis.

According to Southern + citing Indian media reports, the inactivated vaccine Covaxin produced by Bharat Biotech, a local Indian company, has quality problems. Brazil’s national regulatory agency said that Bharat Biotech skipped some of these important testing steps, resulting in the new coronavirus not being completely inactivated and the vaccine may be contaminated by microorganisms. 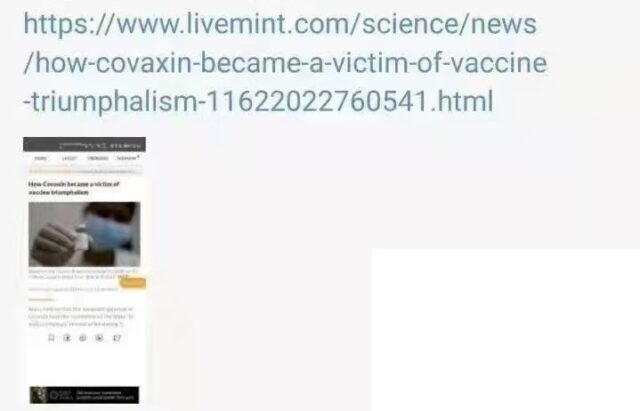 In addition, a document from the Brazilian national regulatory agency shows that the company uses a potency method and cannot ensure that every dose is equivalent. Finally, the Brazilian national regulatory agency expressed dissatisfaction with Bharat Biotech’s measures to ensure the sterility and purity of the vaccine, and listed dozens of regulations of the “Brazil Good Manufacturing Practice”, claiming that Bharat Biotech violated These regulations. The regulations require companies to ensure that processed products are not contaminated by unprocessed products, and involve filtration and sterilization in the manufacturing process.

At present, people in India have received about 9 million doses of Covaxin vaccine. On January 3, 2021, an expert group from the Central Drug Standards Control Organization (CDSCO) of India agreed to approve the emergency use authorization for the COVID-19 vaccine called Covaxin developed by Bharat. This makes it the second COVID-19vaccine to obtain SEC marketing authorization in India after Oxford/AstraZeneca’s COVID-19 vaccine Covishield.

In fact, this is not the first time that the Covaxin COVID-19 vaccine has been questioned. Since May 2020, this native Indian vaccine has been sought after by the Modi government. As the first fully localized COVID-19 vaccine, Covaxin is also considered a manifestation of Indian national pride. In December 2020, the Covaxin vaccine received the green light from the regulatory authorities without providing efficacy data.

Since then, Bharat’s poor transparency and poor management have also been questioned by the public: four months after being approved and used in India, the efficacy data of the Covaxin vaccine has not yet been announced. In stark contrast, the Indian government continues to endorse it, and the General Administration of Medicines and Drugs of India even declared that the vaccine is “110%” safe before the end of the vaccine safety test.

Ironically, many people believe that Covaxin’s rapid approval has damaged the reputation of Made in India. “This is a very short-sighted approach that undermines the original intent of the Made in India movement. True self-reliance means that you have a globally competitive product, taking into account cost and quality,” said Dr. Regnanda, head of the Delhi Science Forum .

Indian vaccine expert microbiologist Kagandeep also believes: “It is very important to maintain a rigorous scientific attitude. If you don’t do this, the rest of the world will lose trust in India.”

The development of the Covaxin vaccine started on May 9, 2020, which is relatively late compared to other vaccines around the world. Bharat used one of the most tried and tested methods: inactivated vaccines.

Although this is a mature and safe technology, the development of inactivated vaccines is not easy. First, a large number of viruses must be reproduced and completely inactivated. As the SARS-CoV-2 virus is dangerous to humans, it must be produced in P3 Biosafety (BSL3) laboratories, and dozens of safety measures will be taken during the process to prevent the virus from escaping.

However, Indian Prime Minister Modi still showed strong interest in the local vaccine development plan. In late November 2020, he made a special visit to the Indian Serum Institute, Bharat and Zydus Cadila in Gujarat, and advised the Indian country in May last year. The Vaccine Development Expert Working Group has accelerated the “clumsy and cumbersome” drug and vaccine approval process.

A letter from Baram Bargava, Director-General of the Medical Research Council of India, shocked the Indian scientific community-the letter revealed that “the highest level of the Indian government” is interfering in vaccine research and development, and Bharat plans to skip two or three. Periodic clinical trials, and cut corners for progress.

The All India People’s Science Network (AIPSN), composed of Indian scientists, protested this: “The desire to have immediate results and please political leaders seems to have transcended the scientific and ethical norms within the Indian Medical Research Council.”

Many Indian experts claimed that a large number of unreviewed approvals damaged the reputation of Indian drug regulatory authorities, scientific research institutions and Indian pharmaceutical companies. Although health emergencies like the COVID-19 pandemic often cause public and political pressure, new drugs are quickly approved. However, one of the tasks of the drug regulatory authority is to resist this pressure and avoid politics over science.

The bigger tragedy is that in the once-in-a-century COVID-19 epidemic, improper handling of procedures may lead to global rejection of Indian vaccines, and even discrimination in the “vaccine passport” sequence: In the worst case, Covaxin Not only can it not provide protection against the COVID-19virus, it will promote the spread of the COVID-19 virus.

In this context, many Indian scientists hope that Covaxin’s Phase III clinical data can be released as soon as possible after accelerated approval. However, as of the end of May, four months have passed since the Covaxin vaccine was used in India, and more than 21 million doses have been vaccinated. Bharat has still not announced the results of the third phase of the vaccine, nor has it shared any valid data.

In the end, Brazilian drug regulatory agency Anvisa inspected Bharat’s production facilities and found that the company did not take adequate precautions to ensure that the SARS-CoV-2 virus in its vaccine was completely inactivated. Given that Indian law also requires these preventive measures, it is not clear why the General Administration of Medicines of India allows such vaccines to pass the approval.

However, Krishna Ella, the company’s founder and chairman, did not directly answer the technical doubts raised by Brazil, but instead attributed everything to political issues in a TV interview. Ella claimed that the report was driven by Brazil’s “nationalism”, with the goal of shutting out Indian vaccines.

Previously, in order to contain the COVID-19 epidemic, India started the third phase of COVID-19 vaccination, vaccinating people between 18 and 44 years old. However, many people resisted vaccination and even jumped into the river when health workers came to vaccinate them.

It is reported that due to fear that many villagers might drown in the river, local officials assured the villagers that they would not be vaccinated. After constant persuasion, these villagers finally went ashore. According to reports, there are about 1,500 people in the village, and only 14 people are willing to be vaccinated. Among them, as many as 200 villagers jumped into the river because they did not want to be vaccinated. They believed that the vaccine was a “poisonous injection” and therefore took extreme measures.

At present, the more contagious mutated COVID-19 virus is spreading in India like wildfire. On May 27, local time, the Indian Ministry of Health released data showing that in the past 24 hours, India had 211,298 new confirmed cases and 3,847 new deaths; the cumulative number of confirmed cases was close to 27.37 million, and the cumulative number of deaths exceeded 315,000.