A decade of checkpoint blockade immunotherapy for melanoma

A decade of checkpoint blockade immunotherapy for melanoma.

Melanoma is the most aggressive and deadly form of skin cancer.

Melanoma often has reactive lymphocytic infiltration, and the degree of peritumoral lymphocyte infiltration is associated with better prognosis, and classification of melanoma ( active, inactive, and absent ) based on the distribution of tumor-infiltrating lymphocytes ( TILs ) is still used today.

It has been ten years since the immune checkpoint inhibitor ipilimumab was approved for advanced melanoma in 2011, making it the first treatment to prolong survival in melanoma.

Then, in 2014, another key T-cell immune checkpoint PD-1 inhibitor, pembrolizumab and nivolumab, was approved for the treatment of metastatic melanoma.

Although the clinical success of immune checkpoint blockade ( ICB ) in melanoma has demonstrated the efficacy of reactivating the immune system to treat the disease, however, even in optimal regimens in combination with ICB, long-term outcomes are still not achieved in approximately half of patients benefit.

It is time to review the lessons learned in modulating the immune system to treat cancer to further expand new approaches to the efficacy of current and emerging immunotherapies.

Melanoma tumors are enriched in TILs specific for melanoma-associated antigens, suggesting that anti-melanoma T cells can undergo priming, expansion, and then re-recruitment to tumors.

(1) recognition of cognate antigens, which are then used in vaccine development;

Research into melanoma TILs was facilitated with the discovery of IL-2 in 1977, enabling T cells to be expanded in vitro to characterize their properties.

A variety of T cells were identified that recognize melanoma-associated tumor antigens, including:

3) Overexpressed antigens: such as PRAME;

4) Neoantigens: Neoantigens originate from tumor-specific somatic mutations that do not exist in the normal human genome and are only expressed in cancer cells.

Collectively, the presence of melanoma-specific TILs suggests that in many cases (1) these cells are not sufficient in number or function to completely eradicate tumors, and (2) they can be enhanced to achieve the desired level of complete tumor eradication in vivo quantity.

To achieve this goal, ACT using ex vivo-expanded TILs was shown to contribute to tumor regression, especially in melanoma.

B cell responses in melanoma

Autoantibodies against melanoma-associated antigens have been reported to be produced in melanoma patients and have been associated with improved prognosis in some cases.

However, whether anti-melanoma antibody responses play a causal role in tumor protection remains to be fully elucidated.

B cells and their antibody products can be highly heterogeneous, with features ranging from pro-inflammatory ( IgG1+ ) to immunosuppressive ( eg, CD1d+IL-10+PD-L1+, IgA+, IgG2+, or IgG4+ ).

This heterogeneity may explain the apparently contradictory findings of independent studies between B-cell infiltration and negative prognosis in melanoma patients. These differences may also be explained by the diversity of immune signaling in the microenvironment and its impact on the polarization of intratumoral B cells towards pro- or anti-inflammatory directions.

Precise measurement of the immunostimulatory and immunosuppressive potential of tumor-associated TLS and the likelihood of predicting its fate based on composition and inflammatory signaling will provide potentially valuable biomarkers of immunotherapy response.

Indeed, despite the many unknowns of TLS and intratumoral B-cell biology, recent reports have linked these factors to improved patient response to ICB.

Mechanisms of immunosuppression in melanoma

Although melanoma is immunogenic, metastatic melanoma does not usually resolve spontaneously.

Treg was increased in peripheral blood ( PB ), lymph nodes and tumor microenvironment ( TME ) of melanoma patients and was found to inhibit TIL function.

Notably, clonal expansion of tumor-specific Tregs was found to correlate with neoantigen load, which in turn correlated with tumor expression of MHC-II, further pointing to a mechanism by which melanoma controls Treg expansion through MHC-II expression. , depending on its immunogenicity.

Furthermore, in melanoma patients, a preference for Th2-polarized CD4+ T cells and related cytokines has been reported, and Th2 immune bias is an indicator of chronic inflammatory responses.

The latest progress of ICB in the treatment of melanoma

Considering the distinct and potentially complementary effects of CTLA-4 and PD-1 blockade, subsequent trials of these therapies in combination demonstrated better long-term efficacy in metastatic melanoma than either agent alone, 49% of patients were still alive after 6.5 years, albeit at the cost of greater toxicity.

Alternative and / or dosing regimens of anti- PD-1 + anti- CTLA-4 are currently being investigated to reduce toxicity.

The most promising novel ICB target is LAG-3, a surface inhibitory receptor structurally similar to CD4 that competes with MHC-II and other ligands such as galectin-3 for binding.

Currently, the leading anti-LAG3 antibody is relatlimab. In March, the FDA approved a fixed-dose combination of relatlimab in combination with nivolumab for the treatment of adult and pediatric patients 12 years of age or older with unresectable or metastatic melanoma.

In addition, an alternative combination regimen is also being studied, with the neoadjuvant nivolumab + relatlimab showing an impressive pCR rate ( 59% ).

Despite the success of ICB , the efficacy of these therapies, even in combination, has reached an upper limit, and new drugs are urgently needed.

Tumor cells are typically adapted to aerobic glycolysis, and in the TME , cancer cells have a metabolic advantage over normal immune cells, thereby facilitating tumor progression and immune evasion.

At present, tumor metabolism is becoming a key target and may be used in combination immunotherapy for targeted therapy.

Metabolic competition is particularly relevant in melanoma, where elevated glycolysis in human melanoma is inversely associated with T cell infiltration and activation and response to ACT or ICB.

To counteract this hypermetabolic phenotype and enhance immunotherapy, antidiabetic biguanides are being studied in melanoma.

Patients receiving metformin had a reduced incidence of new brain metastases and a favorable prognosis. 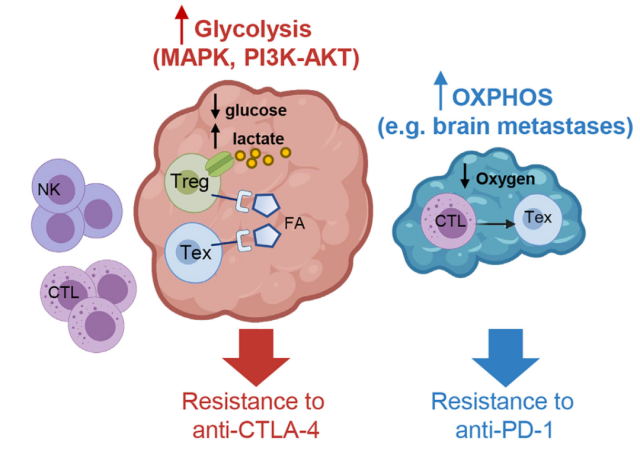 In contrast, tumor glycolysis and glucose deprivation in the microenvironment have a preferential effect on CTLA-4 blockers.

The preferential resistance of oxidative and glycolytic tumor metabolism to anti-PD-1 and anti-CTLA-4 inhibitors, respectively, can be explained, at least in part, by the different cellular localization of these immunotherapeutic direct targets.

PD-1 blockade acts primarily to reinvigorate dysfunctional PD-1+ T cells, whereas CTLA-4 blockade has an effect against Tregs, which are more stable in glucose-starved environments.

Recent studies have shown that targeting lactate or fatty acid metabolism in Treg enhances the response to ICB in mouse melanoma models.

Immune checkpoint inhibitors have been approved for the treatment of advanced melanoma for a decade.

Over the past decade, with our further understanding of the human melanoma immune microenvironment, we have made great achievements in exploring new drugs and new therapies based on immune checkpoint inhibitors.

However, as more and more drugs become available, we need to clarify the mechanism of combination immunotherapy to guide rational combination. We need to focus on: robust biomarkers, resistance mechanisms, and combination with other therapies.

In addition, the toxicity of current and new immunotherapeutic combinations remains a critical point to address, and understanding the molecular mediators of immunotoxicity will go a long way toward controlling these side effects and improving patient management.

1. A decade of checkpoint blockade immunotherapy in melanoma: understanding the molecular basis for immune sensitivity and resistance. Nat Immunol. 2022 May; 23(5): 660–670.

A decade of checkpoint blockade immunotherapy for melanoma