Air pollution affects not only the respiratory system, but also increases risks of obesity and diabetes.

Air pollution has a significant impact on the health of the population, and has even been identified as the fifth largest risk factor for death in the world. Most of the disease burden caused by air pollution is caused by chronic non-communicable diseases, including respiratory diseases and type 2 diabetes.

Studies have shown that long-term exposure to particulate matter (PM2.5), nitrogen dioxide (NO2), ozone (O3) and nitrogen oxides (NOx) with a diameter of ≤2.5μm is associated with a higher risk of obesity, blood glucose imbalance and type 2 diabetes Risk related.

However, the mechanism behind these associations is still uncertain, but it is generally believed that it may be related to increased levels of systemic inflammation, changes in adipose tissue metabolism, and effects on the intestinal flora.

For example, two studies have shown that increased exposure to air pollution (NOx) near roads is related to the relative abundance of intestinal bacteria, which is related to obesity and metabolic changes.

In addition, a recent population-based epidemiological study found that the gut microbiota regulates the impact of fine particulate matter (PM) on type 2 diabetes to a certain extent.

In May 2020, researchers from the University of Colorado at Boulder published a research paper titled: Air pollution exposure is associated with the gut microbiome as revealed by shotgun metagenomic sequencing in Environment International.

The study shows that air pollution can severely damage intestinal bacteria, which in turn increases the risk of obesity, diabetes, gastrointestinal disorders and other chronic diseases. This research is the first to link air pollution with changes in the structure and function of the human gut microbial community. 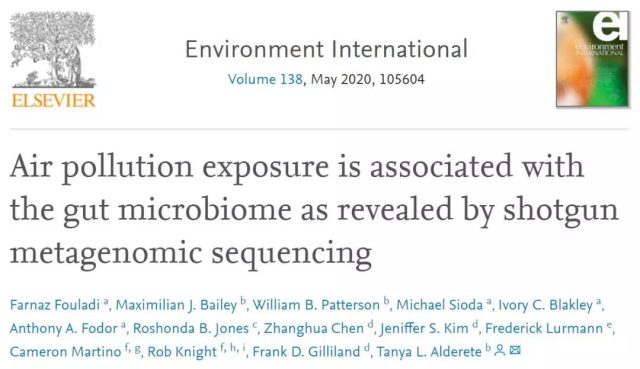 The corresponding author of the study, Professor Tanya Alderete, said that it is known from previous studies that air pollutants may have a series of adverse effects on health. Some studies have linked smog with type 2 diabetes, weight gain and inflammatory bowel disease. But this paper suggests that some of these effects may be due to changes in the intestinal flora.

A new study shows that 8.8 million people die from air pollution-related respiratory diseases each year, more than the number of people who die from smoking or war.

Professor Tanya Alderete’s previous research has shown that air pollution can also impair the body’s ability to regulate blood sugar and affect the risk of obesity. Other studies have shown that the number of people visiting the emergency room due to gastrointestinal problems will increase sharply on days of severe pollution, and young people exposed to high levels of car exhaust are at greater risk of developing Crohn’s disease.

In order to study what might happen in the intestine, the research team used whole-genome sequencing technology to analyze stool samples from 101 young people in Southern California.

The researchers looked at the data from the air monitoring stations near the study subjects’ residences to calculate their exposure to ozone (formed when exhaust emissions from vehicles are exposed to sunlight), particulate matter (harmful particles suspended in the air), and nitrous oxide last year. (Toxic by-products from the burning of fossil fuels). 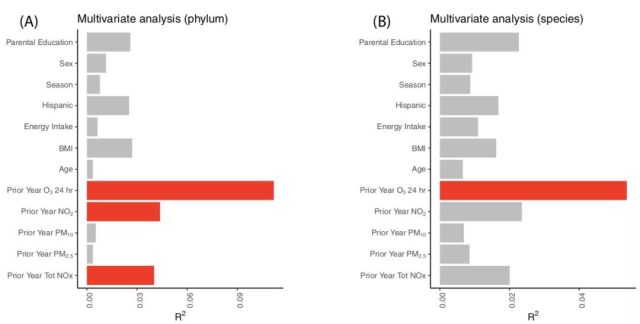 Of all the pollutants measured, ozone has the greatest impact on the intestines, accounting for about 11% of the difference between the subjects, and it is greater than the impact of gender, race, and even diet. People with high ozone exposure also have fewer types of intestinal bacteria. Fewer types of intestinal bacteria are associated with obesity and type 2 diabetes.

Subjects with higher ozone exposure also contained higher levels of specific species called “Bacteroides” in their intestines. This is very important because some studies have shown that a large number of Bacteroides are associated with obesity.

Researchers have found a total of 128 species of bacteria affected by ozone. Some may affect the release of insulin. Some can produce metabolites including fatty acids to help maintain the integrity of the intestinal barrier and fight inflammation.

Ozone may change a person’s intestinal environment, allowing certain bacteria to grow better than others, which may have an impact on health.

It should be pointed out that the scale of this study is relatively small and has some limitations, including that the stool sample was only collected once. The research team is now conducting a larger and more extensive study with young people in the Denver area. They are also exploring the impact of prenatal or early exposure to air pollution on the formation of the gut microbiota in 240 infants.

More and more studies have shown that human exposure to air pollution may have a continuous harmful effect on human health, so there is still a lot of work to be done next. Professor Tanya Alderete hopes that her work will eventually influence decision makers to consider removing parks, playgrounds, and residential developments from busy roads and high-polluting areas, and increase investment to meet or exceed air quality standards.

Air pollution affects not only the respiratory system, but also increases risks of obesity and diabetes.